The Strange Case of Song Joong-ki 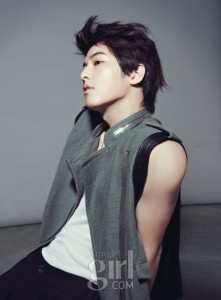 It’s that terrible time again for yet another man of the moment, and this time it’s actor Song Joong-ki. Enlistment whisks away another star of the industry, and Song’s two years of service to his country have just begun as of August 27th. Though there’s little doubt that even after two years in absentia, this man’s career will be a long and glamorous one, his journey to this state of stardom has been short, unusual, but undeniably successful.

In my book of names, Song Joong-ki really never commanded my attention until late 2012 with his hit melodrama Nice Guy. I knew he’d been on Running Man for a bit, but (and for good reason), his ‘major player’ status never seemed to be established until Nice Guy. For one, he hasn’t even been on the scene for that long. With a career that began in 2008, his cache of experiences lags behind that of household names like Lee Min-ho (active since 2003) or even Kim Soo-hyun (active since 2007). To add to the mix, most of the roles he played were oddly inconspicuous and largely unreflective of his actual talents, as Amy hilariously detailed last year.

In Song Joong-ki, I see something that isn’t so evident in so many other top actors of the day: serious commitment to studying his art. I think he’s being honest when he says, “I’d be happy to go through growing pains [to grow as an actor]” and “A challenging role [is] more worthwhile than being in a lead role of a miniseries.”  And as fair as those self assessments might be, I can’t brush his words off as merely a passive reaction to landing yet another small role (that also ends in death) in Tree With Deep Roots:

After Sungkyunkwan Scandal ended, I received many sageuk offers. I had initially felt that sageuks were too difficult, and was not intending to act in them anymore, but strangely, there’s a sexiness about sageuks. The sexiness that comes from the way they are filmed, the shimmer of the hanboks and all that. Even the lines from a sageuk evoke feelings…that are special.

This is what he made of the drama in which he had a four-episode stint following Sungkyunwan Scandal (2010); the drama that was the first major breakthrough of his career, and probably the ticket to his later spot on Running Man. Can you taste his sincerity? I swear I can. 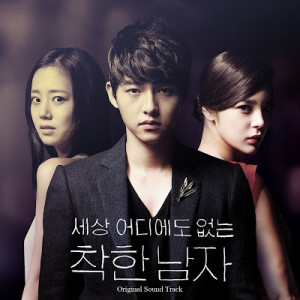 Song finally landed his next influential role as Kang Ma-ru in Nice Guy. Paired with the release of Werewolf Boy, Nice Guy solidified Song’s popularity and brought him onto the international stage with its premiere at the Toronto International Film Festival. While it was intended to be commercially successful, there’s a whimsical and simplistic air to it that reminds us of a film short or an art film. This goes again to show Song’s unconventional choices in projects. Moreover, in Werewolf Boy, Song is no smooth alpha male — he stars as a creature: part man, mostly beast. He says no more than five legitimate words in the entirety of the film.

Don’t be fooled into thinking that his role was easy to pull off, though. Far from that, Song’s vivid portrayal of his raw-and-animalistic-turned-loving-and-innocent character in Werewolf Boy is both artistic and powerfully convincing. In an interview with 10Asia, he says that he observed from stray dogs on the street and watched nature documentaries, Edward Scissorhands, and Gollum from Lord of the Rings to learn how to imitate animal movement and immerse himself in the character. His efforts to create and shape this character show through his colorful and well-constructed personification in the movie. 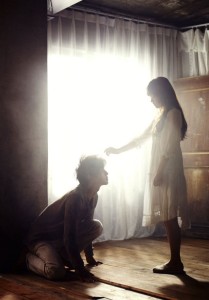 Aside from acting, Song has dabbled in his share of odd jobs. He’s best known for his time on Running Man before acting became a priority, but his resume also boasts his experience as an author, narrator, and MC. In 2010, he published The Beautiful Skin Project, a bestselling health and beauty guide for men. He also MCed on Music Bank and narrated the MBC documentary Tears of the Antarctic (2011-12). His work hasn’t exactly been strategically chosen, but it’s a testimony to how such a capable and talented man can be driven by his passion and personal philosophy over the attraction of money and lead roles. 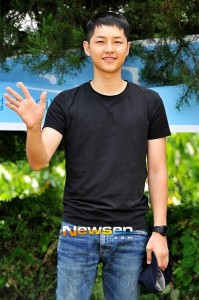 After two major hits and a sweeping of the end of the year awards, Song Joong-ki seems to have gone MIA. He’s appeared in plenty of CFs, but no new projects. I thought he was going to pull another post-Tree With Deep Roots-esque act or write another book on skincare, but even for someone as unpredictable as he is, I should’ve guessed that enlistment was hiding up his sleeve. Was this the best time for him to disappear off the radar? Probably not. But in many ways, the situation is similar to what happened after Tree With Deep Roots. Even so, however, I’m fairly confident that this time, he’s securely staked out a niche for himself and left a unique imprint on the public. His rebound should be an effortless one.

Well, at least it’s relieving to see that he’s just as charming in his crew cut and camouflage. So long and farewell, Song Joong-ki. In two years, I think I’ll still be more than willing to lay awake in early hours of the day to watch you do your magic on screen.