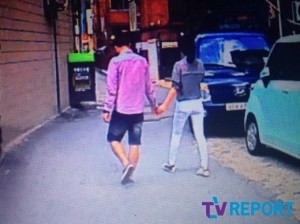 Are reporters trying to best one another or are celebrities being just a little less careful? In a span of 24 hours, we’ve got Kim Woo-bin in a two year relationship with model Yoo Ji-ahn, T-ara‘s Soyeon celebrating her 1000th day with Click B‘s Oh Jong-hyuk, and rumors of f(x)‘s Sulli dating Dynamic Duo‘s Choiza.

Kim Woo-bin’s two year relationship apparently wasn’t even kept hidden, with the two openly hanging out with one another and readily admitting their relationship. Sports Seoul caught Soyeon and Oh Jong-hyuk celebrating in a cafe, and both Core Contents Media and DSP Media confirmed the rumor. Funnily enough, for those who may have seen Soyeon on variety shows in the past, you may remember her quick admissions of being a large fan of Click B (100 Points Out of 100 comes to mind for me).

While the first two rumors are confirmed, the last is speculation based on photos and a video clip released by TV Report. Sulli and Choiza stay apart from each other in more congested places, like the road, but hold hands in some of the less traversed areas. SM Entertainment, as per usual, denied the dating rumors, saying the two are close like siblings, while Amoeba Culture has yet to say anything.

Readers, what do you think of the new couples? And multiple in a day? Any surprises? I know the last one was completely unexpected for me.