Confrontations Galore in "The Terror Live" 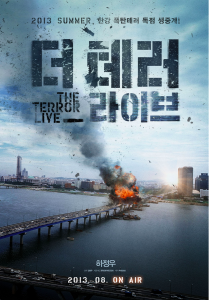 psychological narrative in the recently released thriller film The Terror Live commands full attention. This comes off as unsurprising considering the 33-year old director, Kim Byung-woo, had already displayed sharp expertise working within the psychological thriller genre prior to this release. The big budget film, released on August 1st, 2013, is a substantial step up in terms of story and cinematography as expected from his previous feature, an indie film named Written.

The standout performance of the film undoubtedly belongs to Ha Jung-woo, whose outstanding turn as Yoon Young-hwa, a news anchor demoted to radio DJ is constructed as the center piece the entire length of the feature. Having had the advantage of playing prominent roles in two massive productions this year, he electrifies with a remarkable performance after a turn as a spy in The Berlin File released earlier in late January.

Brilliantly staged entirely within the confines of a broadcasting studio, the protagonist clashes with systematic dysfunction simultaneously within the news corporation and the government all the while dealing with a mysterious caller. The caller calls Yoon during one his morning radio sessions and threatens to blow up the Mapo bridge, which he quickly dismisses as a joke. Then minutes later, an explosion goes off on that very same bridge located along the Han river.

Yoon struggles to comprehend the situation at first seeing the explosion from his workplace window but after the initial shock from the blast wears off, he spots an opportunity of regaining his anchor position and decides to capitalize by making a deal with Cha Dae-eun, the bureau chief played by Lee Kyung-yong. The few moments after the detonation sees the compromised hero take a stroll outside of the studio to go the bathroom, the one instance of shift in production backdrop. Inside, he calmly reconditions himself and puts on a tie seemingly ready to take on the challenge which he soon discovers to be beyond his control. 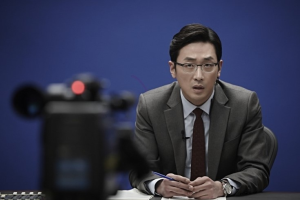 As the exclusive live broadcast begins, the significance of the title takes shape as the severity of the situation dawns on every party involved, especially government officials, news corporations, who are all deservedly so depicted in a corrupt light and convicted long before the primary suspect in the eyes of the audience. Their search for power and control leave many in limbo – mainly the protagonist and those stuck on the bridge after a second blast – one of whom Yoon learns is his ex-wife, the station dispatch reporter who he wants back in his life.

Even though the lack of space and movement handicaps Yoon greatly, his initiative even after being informed by the bomber of the explosive device planted on him makes him the forbearing presence. The caller’s anger towards the government seems justified after learning that during the construction of the very bridge, official negligence had led to the death of three of his fellow construction workers and clear oversight had resulted in no compensation for the family of the lost ones. The same anger directed through the medium of mass destruction devices which ultimately leads to innocent lives being lost makes it hard to comprehend the state of mind of the bomber and just how he thought that his demand for an official apology from the president of the country would have come to fruition in the first place.

Yoon abandons all hope after learning of a breach of trust by the chief he confided in earlier and suffering a personal tragedy during his back-and-forth with the suspect. With that, he decides to take matters into his own hands and challenges the caller in a final showdown. The stagnant president who is most wanted never reveals himself, showing the shrewd undertaking by the government during critical times and makes the rage expressed by the bomber and the hero all the more fitting. The director, intent on drawing a relation between motivation and actions, does a great job of not compromising the plot for the sake of making the protagonist appear morally superior than the rest. In fact, the adversity Yoon suffers can be pointed out to be a downfall from his own moral lapse in judgment.

The Terror Live is a compelling look at a disaster situation with a stellar screenplay. The entire cast is terrific even though the plot in parts drags on due to a lack in character depth. The final product is an adrenaline-fueled psychological thriller of substance that is gripping from start to finish.