A Pink's Calling "U You"

A Pink has to be the most consistent girl group out there in terms of image. From their early release “MY MY” (MyMyMy at parts of the song) in 2011, to “NoNoNo”, and now “U You” (which becomes UYOUYOU) , they’ve kept up that trend of slickly-produced pop tunes with a repeated triad of words and enough bubblegum sweetness to feed an entire country. Sweet like an ice cream in summer, it’s also as memorable as that, i.e Not for very long.

Like the majority of K-pop songs today, “U You” is about falling in love. Unlike the majority of K-pop songs put out, though, it’s actually a really happy song. Bright, summery and sweet, the girls sing effusively about falling more and more in love with this particular boy. There’s a great piano melody going on in the background, playful and light, like the fluttery heart of a teenage girl. To no one’s surprise, A Pink sells this song really well. The girls look great as always, and the set, although it looks suspiciously similar to “NoNoNo”, matches really well with the summery mood of the song.

The track never takes itself too seriously, and as Patricia said when talking about summer singles, this relaxed mood and lack of try-hard is what tends to make summer singles. The best part about the MV has to be watching the girls goof around with one another. There isn’t any plot or any dance to the MV, just the girls in what looks like a recycled set from “NoNoNo”, singing about a summer love and making faces at the camera.

This is probably because “U You” is already the third release from their Secret Garden Album, after “NoNoNo” and “Secret Garden”. There hasn’t been much promotion for this track other than the release of the music video. That would explain the lack of choreography or even more different sets or outfits for “U You”.

But all these factors actually combine to make “U You” a really great summer track. It’s nice to see them just having fun and being silly without overtly trying to sell sexuality to the camera. Let’s not get into an argument about sexuality and objectification here, we already have reams and reams of articles covering K-pop’s relationship with patriarchy and gender. All I’m saying is that after being swept away by all of K-pop’s sexy ladies (“Tonight”, “Falling In Love”, “Female President”, “Wild”, “It’s Poppin”) over the past few months, it’s actually striking to see the A Pink girls just have fun and do things like smack each other over the head just because they want to, doing things outside of their image to do dorky stuff. Eunji in particular is a gem – she’s just so real. The lack of an attempt to sell something using overt sexuality is really refreshing. 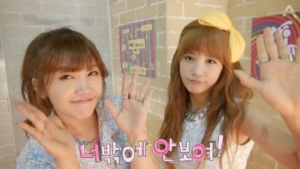 This brings us to A Pink’s current position in the K-Pop market. It’s very clear that A Pink is steadily making its way up the K-pop ladder using a tried-and-tested formula of girl-next-door sweetness. The individual members are also slowly carving out niches for themselves in the variety arena, with Eunji shooting to stardom in Reply 1997 last year and Naeun gaining popularity through We Got Married this year. As of now, there isn’t any girl group that does what they do as well as A Pink does. This means that A Pink’s current formula will be viable for at least another promotional cycle.

But how long can A Pink stay like this? It’s amazing how, as a group that’s only two years old, they already have a concept and sound that works so well for them, but how many times can they rework this before the public loses interest? Or will they be able to defy the odds and stick to this particular A Pink sound for, say, five more years?

Either way, it’s not worth worrying too much about now, when you have such a sweet single waiting for you to eat up on a hot summer day. Bon appetit!