Take Us to Your Leaders! Turn It Up to 11: Wild Days, a Review 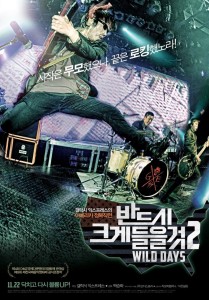 One of the foremost criticisms of the Hallyu wave focuses on the factory-like production of its musical stars. “13-year contracts! Mine is nine years, that’s how nice I am!” This outburst from fictional President Ko, head of MGM Entertainment in recently-ended K-drama Monstar, refers to the treatment of his idols. It’s meant to be funny but it’s also a tongue-in-cheek poke at the excessive rigors of the idol manufacturing industry. Enter indie rock band: Galaxy Express. When asked how Galaxy Express is different from other musical acts, they reply, “How is Galaxy Express different? Galaxy Express is f*cking outrageous.”

Make no mistake, this is no softly-filtered, upper management-approved, SM Town’s I AM. Turn It Up to 11: Wild Days is a rock-umentary. Cursing, smoking, drinking alcohol and referring to each other as moron, idiot and dumb-ass, this outers-space trio takes their first solo tour shenanigans to the US in 2012; and it is a mind-blowing 19 concerts in three weeks. “Instead of waiting for attention from mediums that ignore indie music, we create our own opportunities,” explains Baek Seung-hwa, the director of this film and 2009’s Turn It Up to 11, a similar documentary that followed indie rocker Lee Gyu-young.

Not wanting to play shows in America for Korean fans, the band stepped away from their involvement with Seoulsonic, the concert producer that brought them over to tour in 2011. Turn It Up to 11: Wild Days depicts the band, armed only with their musical skills, singular live show and some English language crib notes, journeying through Texas, preaching the gospel of rock to earthlings of a different culture and continent. 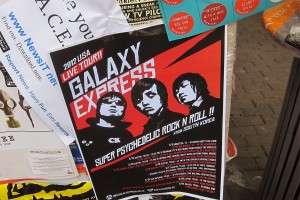 They fumble through their first radio interview in choppy English. They order at restaurants by pointing to the pictures on the menu. At one show, only three people attend. At another, people are more interested in riding the mechanical bull than in their set. Still, no matter their surroundings or size of crowd, they discover that the language of rock creates mutual understandings. After playing in the basement of a pizza parlour in Denton, and another time in the tiny town of Lufkin, Jong-hyun, lead guitarist and vocal, sums it up: “Some might think, what is the point of playing in a place like this? The crucial point is not that we’re in the US. It’s a humbling experience, being like the local musicians.” Though the film also covers their high points — being mentioned by the New York Times and playing at SXSW — it is in contrast with these stranger-in-a-strange-land low points that their irrepressible passion for music becomes apparent. Turn It Up to 11: Wild Days is a hilarious and off-kilter film, shining an energetic spotlight on a band many might never hear, and might even overlook, for the gloss and glitz of the idol scene.