So You Wanna Listen to J-pop: A K-pop Fan's Guide 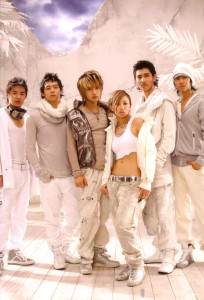 One of the many benefits to liking music from another country is that it opens up a large musical gateway. We’ve discussed this before in regards to K-pop and other Korean music, but K-pop also works for finding music in other countries, particularly Japan because of K-pop’s presence in their market. Conversely, there are those who might’ve initially heard of K-pop via J-pop, like myself. I’ve known many who are attracted to the visuals in K-pop because they already like hyper-stylized J-pop bands, or even because they like anime. Due to all the musical crossover, it seems like a logical step to jump from one pop to the other.

Maybe you’ve already made the leap; if so, congrats! This article is already old news for you. This article is for the K-pop fan who wants to listen to J-pop, but doesn’t know where to begin. The one who clicked the Kyary Pamyu Pamyu video on their YouTube sidebar and realized they were in over their head. The one who wants to know about the J-pop groups that keep popping up alongside their favs, or the one who’s magically run out of K-pop to listen to, and needs new suggestions.

However, it’s important to realize that while K-pop is a great gateway to J-pop, it’s impossible to say that the two are the same. Structurally it’s all pop music, but there are differences in style, production, promotion, etc. We’ve touched on them before in a previous exchange, but basically, you’re not going to get a copy-and-paste version of a K-pop band in J-pop — unless it’s actually the same band. Embracing the little differences, enjoying the niche genres and discovering new bands is what this is all about.

If you’re feeling the culture gap and don’t know where to begin… listen to K-pop groups’ Japanese releases. I’m not speaking of your favs’ occasional Japanese single, I’m talking about delving into the K-pop groups who’ve had more success in Japan than in Korea. This is particularly true for certain boy bands; Supernova, DGNA (The Boss), SHU-I, SMASH and A-peace are all K-pop bands you’ll see regularly on Japanese music charts, but perhaps have never heard of in the K-pop sphere.

For girls, Kara has really dug in and consistently produced Japanese material, and as a result, are very popular — popular enough to advertise food products. Veterans of J-pop BoA and Tohoshinki (TVXQ) are staples as well. Also, don’t forget that CNBlue are always releasing great Japanese singles right under our noses.

If you like female soloists… you are in luck, especially if you’ve realized the merits of an older vocalist. Start with the trifecta: Amuro Namie, Hamasaki Ayumi and Koda Kumi. These ladies are onto releasing their 50th+ singles, despite looking like they age in reverse. For a good starter, Amuro Namie once did a collaboration with After School:

Check out Nishino Kana for bubblegum pop; Jasmine for an urban/dance feel; and YUI and her new band FLOWER FLOWER to satisfy those who like singer-songwriters along the lines of Juniel.

If you like cute girl groups… you probably already know that AKB48 is taking over Japan. The 80+ member franchise might be too mind-boggling for some, but there are plenty of other smaller girl groups. Try out Passpo or E-Girls, the latter having the bonus of being several groups in one. For someone interested in seeing how a multinational group like The Gloss might fare, Avex just debuted FAKY.

If you wish f(x) stuck to their electronic sound… try Perfume or MiChi, both who do electropop really well, and can lead you to more experimental electronic musicians.

If you like the ridiculous visuals of Crayon Pop… that are not only cute, but also make fun of the aesthetic, look at Momoiro Clover Z. And then try Kyary again.

If you like boy bands… get to know the name “Johnny’s.” Johnny’s & Associates is the producer of all things boy band in Japan. There are non-Johnny’s boy bands, but the company dominates the market. Their “older” boy bands (think Shinhwa’s age) still turn everything they touch to gold. Or platinum. Start with Arashi, since you’ll be seeing their name a lot.

Then there are the young ones. First, Hey! Say! JUMP:

Once you’ve digested that, then you’re ready for Kis-My-Ft2, because who doesn’t love a gum commercial disguised as a mummy resurrection?

Lastly, if you like a little rock with your pop… Remember that J-rock band that once performed on M!Countdown? That was SPYAIR:

For another K-pop connection, legendary rock band B’z were the ones who composed Kim Hyun Joong’s “Heat.” (See their rendition here.) Undoubtedly, these will lead you down a very awesome J-rock rabbit hole.

Of course, there are too many groups and sub-genres to attend to in one article, but hopefully this will give you a start in J-pop, using K-pop as your portal.

Since there are many great and fun bands not mentioned, I ask our readers: who are your favs in the J-pop sphere? Who would you recommend to a K-pop fan?