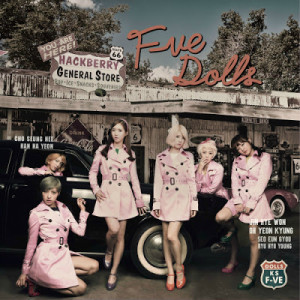 With all of the chaos that has been going on at Core Contents Media, it comes as no surprise that any group that isn’t T-ara (or Davichi) has been on the backburner, F-ve Dolls included. In fact, more than two years have passed since they’ve released anything, but it’s not like they’ve escaped unscathed from the CCM wreckage.

F-ve Dolls — who recently made the name change from 5Dolls — is technically the all-girl sub-unit of creatively named co-ed group Co-Ed School. The four female members plus the addition of new member Eunkyo formed the sub-unit originally, making the group name logical. But after that, the group went through multiple reshuffles and now stands as a six-member group after the addition of new members Seunghee and Yeonkyung, who is simultaneously a member of The SeeYa, another of CCM’s many neglected children.

On top of that, while nothing official has been released, rumors have been circulating that Co-Ed School has officially split into their sub-units Speed and F-ve Dolls. But since they had minimal success and haven’t released anything since 2010 when they made their debut, I would not be surprised if the rumors turn out to be true (though I would be disappointed since I loved the idea of a co-ed group).

Even though neither sub-unit has released anything remarkable, and my hope for a good comeback — or just a comeback at all — has sunk exponentially with each CCM announcement, it seems that it’s not quite time to throw in the towel. Released on July 30, “Soulmate #1” is F-ve Dolls’ stab at the disco trend. Unfortunately, the sextet has the shadow of T-ara’s retro hit “Roly Poly” looming, and it appears they couldn’t shake it entirely with the music video.

While the music video is obviously not the same as T-ara’s, there are similarities in the color palette in the cinematography. It would be different if F-ve Dolls wasn’t a junior group in the same company because we could write it off (to be positive) as a coincidence, but that isn’t the case. The music video has the added effect of an old reel of film, which makes a distinction, but it still gives the appearance that CCM has just taken an old concept and spun it.

Cinematography aside, the music video makes a strange era mix-up, which was actually the first thing that jumped out at me. The song is plainly influenced by disco, especially with that whistle that is reminiscent of “Funkytown” by Lipps, Inc., which is the ’70s. The music video though is very ’60s with the sets and styling. The girls wear lots of black and white, circle sunglasses, bold patterns and accessories, and, perhaps the most notable style of the era, the shift dress. Plus, the sets are akin to those of ’60s television. (Think Hairspray.)

Then, there’s a strange pin-up undercurrent to the entire video. The neon sign of their name, the shots of them at vanities, and the hot pants outfits are all reminiscent of ’40s pin-up model styles. The combination of the different eras compiles into a cute music video that confuses me because I don’t understand the concept.

And trying to understand it seems rather pointless because there is no real plot. The girls appear to be movie stars with the blatantly fake New York Times with the front page news that “Korean super idol group F-ve Dolls hits Billboard No. 1” as a clue to their fame, but there isn’t really anything going on, which is this music video’s biggest weakness. The girls mostly sit around the sets so there is nothing to drive this music video, making it unfortunately quite boring. 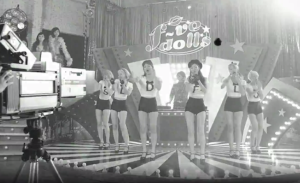 There isn’t even a single shot of them dancing until the last minute of the video. Even then, altogether the dance shots come to maybe ten or fifteen seconds of footage, just a negligible blip. The dance is nothing fancy. It mostly consists of the typical disco moves of pointing and extended arms and a cute kiss move. But it could have served to liven up the rest of the music video since it’s actually energetic.

Really, it’s quite unfortunate that this music video is so weak because the song is not. It uses disco influences but sticks to the light dance beat as the backbone. While many other renditions have made use of the typical disco sound of orchestral strings and horns, F-ve Dolls doesn’t have the vocal strength to carry a song that heavy so it was a good choice to stick to the lighter electronic sound. It’s more K-pop with tinges of the genre rather than a dive into it, which makes more sense for a group that isn’t so well-known as it makes them more broadly appealing.

The song itself is great, especially in comparison to their lackluster debut duo tracks “Lip Stains” and “I Mean You/Your Words.” Sadly, the music video is boring and confusing. While I’m disappointed for the sake of F-ve Dolls, I can’t say I’m surprised, given their company’s run.