AA Returns with 'Ok About It' 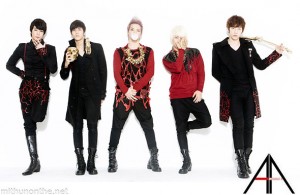 Staking a claim in the K-pop scene has become quite the battle. Every year, new groups struggle to break into a market that treats them more and more like a commodity with each passing day, making it increasingly harder for groups to grab viewers’ attention and hold onto it, especially for those coming from smaller companies. AA, also known as Double A, is one of those groups and has sadly yet to break out of their nameless rookie status.

Debuting in 2011 alongside such groups as B1A4, Block B, and Boyfriend, AA had the potential right from the start. The group’s leader Woosang has a fantastic resume as the main dancer. He was a backup dancer for Shinhwa and TVXQ and later a choreographer for Super Junior and CSJH the Grace.

Throw in talented singer and composer Aoora who first debuted in 2007 as a member of group ONE-X, which later disbanded, then as a solo artist under the stage name gn.E. in 2009, and you’ve got the foundation of the group. With the addition of gorgeous visual Joowon and maknae line Hoik and Kimchi with their fantastic vocals, they had the talent to make an impact on the K-pop scene.

The group made an excellent debut with their first single “So Crazy.” They not only showed that they had talent in their performances, but they also actually had a good track as a vehicle to prove it. The song was catchy, the vocals were strong, and the dance moves were fluid. Unfortunately, the limelight eluded AA, but the group has persisted. 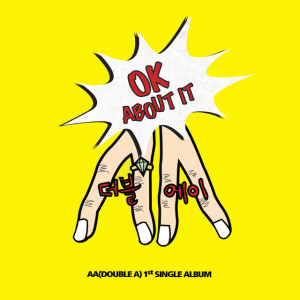 Even though the group lost Joowon in a member shuffle just a few months ago, they’ve gained new member Jinhong and another member who has yet to be announced. In the meantime, AA is back with their newest digital single Ok About It. Released on August 18, it features three tracks, the first of which is the eponymous single.

“Ok About It” is a break-up song but not of the normal variety, as is evident in the music video. The lyrics are about a guy who has a girlfriend who is always threatening to break up with him, but he’s fed up with her constantly comparing him to other guys and always manipulating him. So he does what any guy would do: he tells her that he’s fine with her breaking up with him. In fact, he tells her that she shouldn’t even bother calling anymore.

It’s obvious that he’s pissed off, but the music itself doesn’t show any of that. The track is incredibly bouncy and bright, a perfect summer tune if it weren’t for the lyrics. The spots where the lyrics are not angry are repetitive, specifically the opening and chorus.

The song is rather catchy, and unlike many summer songs, it’s not too light. It has a great beat that grounds it and pairs well with the synth. It’s nothing novel, but it still makes for a fun song, albeit one with disharmony between music and lyrics. Really, “Ok About It” sounds more like a love song than a break-up song. The equally happy music video compounds that further.

With new member Jinhong as the lead role, the music video follows him as his girlfriend breaks up with him. His parents are out of town so he decided to party it up with his friends and celebrate the end of his relationship. It’s all a bit strange considering the fact that he was born in 1998, which would put him at a whopping fifteen years old. Yeah, poor kid doesn’t really seem like he would know much about relationships.

At the risk of feeling creepy, I’ll admit that it works since the music video takes a rather B1A4-esque approach in everything from color palette and choreography to the styling and overall eccentric cuteness. The difference is B1A4 is better at it, mostly because they’ve done it more. AA has never really done this kind of cute, though “Rollin’ Rollin’” came close, so their wacky aegyo hasn’t been perfected.

Also, it doesn’t suit them as a unit. Jinhong and the rest of the original maknae line may fit the concept perfectly with their youthful cuteness, but Woosang and Aoora are twenty-three and twenty-seven respectively, which is on the older end of the spectrum for idol ages. They look and carry themselves the way anyone their age would. There’s nothing wrong with it, but it just doesn’t work for a super aegyo music video.

The funny thing is maknae Kimchi was left out of the music video for their pre-release track “Midnight Taxi” because he didn’t fit the concept. I guess it makes sense if you think exclusively about its lyrics. The track is not even suggestive, just straight up sexual.

Your texts say you want it, but phone calls are risky
We can only be together before the sun rises

And while the lyrics talk about sex directly, the music video is far from explicit. Rather, it’s more “artsy” than suggestive, which makes for a nice contrast to the lyrics and lovely complement to the R&B nature of the song. In fact, the closest they get to being suggestive is singing while sitting on a bed.

Using lots of montages, pauses, color washes, and interesting transitions, the music video almost makes you pass over the fact that there are only three members in the music video: Woosang, Aoora and Hoik. As mentioned, Kimchi was left out of the music video, but this was also before Jinhong was introduced so that makes sense. Kimchi’s exclusion, on the other hand, is silly because the music video is not at all suggestive. It’s not like he doesn’t have lines in the song. The other members just sing them instead.

As strange as I find it, his lack of an appearance isn’t necessarily a bad thing, though it could have worked better if they had made a more drama type of music video so that none of the members were there. Then again, a drama version of this song would likely have received MOGEF’s stamp of disapproval before it was even released.

Still, the music video is not lacking. While it sometimes seems like someone was just having a lot of fun with Photobooth, the shots of the city at night through the window of a taxi break it up nicely and serve as the literal interpretation of the lyrics without going into the suggestive side of things. But it’s not the artsiness of the music video that makes me like, but rather just the song itself.

“Midnight Taxi” is a strong electro-R&B track that thankfully doesn’t throw in any unnecessary raps. It has smooth vocals — Hoik’s voice in particular is mellifluous and wonderful. The track itself uses a wide variety of synthesizers with a R&B beat that all work together in sync. One particular subdued celestial-sounding synth in the background fills out the song without overwhelming it the way much electronic layering can (see Exo‘s “Wolf”). Instead, we get a track that uses layering effectively. 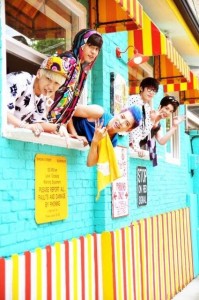 Of the two tracks, I prefer “Midnight Taxi.” It’s stronger musically and actually sounds different from the typical K-pop summer single fanfare, but that’s probably why it wasn’t selected as the promotional single. “Ok About It” fits the bill for marketing better. Plus, it has actual chanting, and who doesn’t love to chant their favorite summer single at the top of their lungs?

But perhaps the other song on the digital single “2nite 3x” would have been the best as a single. It’s a happy middle with a fun dance beat and lyrics about partying but still using tinges of R&B which suits their vocal style better than the straight pop of “Ok About It.” It would have better showcased the talent that AA has and set them apart enough to make a memorable mark on the K-pop scene without being too different.

With the talent and dedication they have (they even make their own stage outfits) AA deserves more recognition. Maybe “Ok About It” is just the ticket they need to get it.