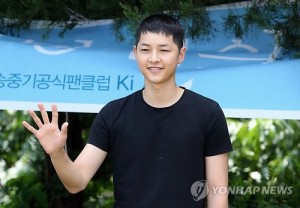 It was a busy week in K-pop as fans who were able to head to Los  Angeles were treated to KCON 2013 with appearances and performances by Exo, Teen Top, f(x), Henry, Dynamic Duo, 2AM and G-Dragon. Much mahalos to the fans who shared fan cams of the event with those of us unable to go–it made the regret a little less. We also said said farewell to actor Song Joong-ki as he entered boot camp to begin his two years of military service. Stay safe and serve your country proud–we’ll anxiously await your return.

The following are the top 5 Things that happened in K-pop last week that I thought were a bit more special than the rest. If you are not up-to-date with your K-pop happenings and don’t like spoilers, go no further because there are at least 5 spoilers ahead.

Kim Byung-man’s Law of the Jungle headed to the Carribbean for its latest adventure and they have been doing a lot like surviving millions of mosquitos, collecting conch, snorkeling and catching lobsters, deep sea fishing, and modeling? Check out the designs Kim Byung-man makes with coconut fronds and Infinite‘s Sungyeol working it like a pro although he really needed to get rid of the socks.

The K-drama Who Are You is still a good watch in spite of a bit of over-acting from both Taec and So Yi-hyun and as story line that’s a little predictable.  Taec takes his bumbling good guy a tad too far at times and as for So Yi-hyun–you’ve been seeing ghosts for a while now so you probably shouldn’t have the same terrified expression every time a new one comes to you. But s0meone definitely worth watching is Kim Jae-wook, in his first drama since completing his military service, as So Yi-hyun’s murdered fellow detective boyfriend. There’s so much conveyed in his acting–and he’s not even talking half the time.

Caught up with the current season of Super Star K, can you believe it’s in its fifth season? I really enjoyed the audition of contestant and soccer loving tomboy Kim Hee-won and her rendition of B1A4‘s song “If.” There were a bunch of talented contestants that made it through the auditions on this episode –it looks like it will be another great season.

The last episode of Infinite Challenge was a continuation of its viewer special where student fans had an opportunity to plan and direct an episode of the show. The latter half of the episode had the members meeting with the second team that won and were planning an MT (Member Training) trip with the cast and some of the winner’s friends–7 high school girls. It was a lot of fun to watch and you could tell the cast were enjoying themselves also as they played games, got to know each other and had a cooking contest. As part of the episode, the cast also learned Exo‘s “Growl” so that they could do a special performance for the girls.

Lee Hyori shared with fans a video of Lee Sang-soon‘s proposal event through a recent tweet. In the video, Lee Sang-soon put together a montage of video messages from all of their closest friends congratulating them on getting married and at the end of the clip he presented her with a ring. As a long time fan, I got a little misty eyed myself knowing that Hyori had been ready to settle down for years now and had just been waiting for the right person. Congratulations to the couple who will be getting married in September.