SHU-I Returns after a Four-Year Disappearance 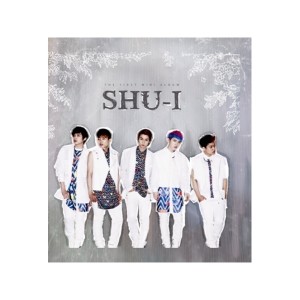 After School, 2NE1, 4Minute, T-ara, f(x), Secret, Beast, MBLAQ, and Rainbow debuted in 2009. Even if the groups vary in popularity, most K-pop fans have at least heard of these groups. But among their cohorts debuting that year was little known group SHU-I. Few probably even know who they are; I certainly did not when I decided to give their newest release a listen.

SHU-I, standing for “So Hot Union of Idols” (it’s funny that they would debut the same year as MBLAQ and Beast, who also have nonsensical acronyms), comes from the small company Yejeon Media so their lack of recognition makes sense on that fact alone. But shortly after they debuted in September 2009, they immediately jetted off to Japan where they’ve been active for the past four years. During that time, they’ released an EP, a full studio album, and multiple singles.

Perhaps it’s because they were so successful in Japan (some of their album made top 10 on the Oricon charts), but it’s still somewhat strange that they would stay there for so long without a Korean comeback. Regardless, SHU-I is back to their roots with the release of Mini-Album Vol. 1, their first EP in Korea.

The album opens with the promotional single “Don’t Let It Get You Down,” a house influenced pop song with an epic undertone to it. Boasting lyrics that tell the listener to not let negativity bring him down, it makes sense that the song would have a grander sound to it with its use of drums and trumpet. The song’s retro feel reminds me of old American pop music, and it makes for a catchy song that’s different from much of recent releases.

For such a surprisingly great comeback song, the music video is unfortunately lacking. The production value is quite low, and it’s obvious. Plus, the choreography is weaker than one would expect for such a powerful sounding song. What they do have to work with is not all that synchronized either.

Strangely, they do a better job live with stronger, more even performances — the vocals sound great, proving that they aren’t rookies. Then again, so many groups that have been around for quite some time are still weak live so it’s great to see that SHU-I is actually excellent live.

They continue with “Forever with You,” a moving strings-driven ballad. The lyrics. penned by the group members for their fans, are rather straightforward as they’re about being in love and never wanting to leave their side. The song is a pleasant, sweet surprise with the piano and soul influences in it. What makes this song so wonderful is all of the harmonizing throughout — a rare feat in K-pop, and one that they pull off quite well.

“Summer Sweet,” a Korean remake of their previous Japanese single of the same name, is a cute pop song that seems to be tailored toward a J-pop audience. The song is saccharine with lyrics like “When I see the loveable her/I am filled with fluttering feelings,” but it matches the sound perfectly. It has a lightness to it with a fast beat and leading electric guitar, making for a fun track.

There is something fantastically show tune-ish about “Scream,” the next track. The jazzy piano and snapping throughout the verses really contribute to the show tune feel, but when it gets to the chorus, the song becomes more of a typical party song with the electronic line and club beat taking over. It’s an interesting and different mix that’s fun and upbeat. 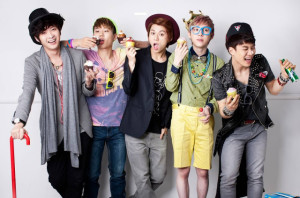 “I Want to Touch You” is a more mid-tempo dance track about a girl playing hard to get. It has the elements of a typical party song but is somewhat slower. It’s rather bland, using a constant electronic line throughout it and a club beat but little else to make it interesting. It’s a fair song but forgettable after the more dynamic “Scream.”

The next track, “Bomb Bomb Bomb” was the group’s debut single. While it makes sense that it appeared on their first mini-album, it’s strange that it’s appearing again on a full-length album released nearly four years after SHU-I first released the song. As a synth-heavy dance track, it’s fast and catchy, but the chorus is strange because of the asynchrony between the drum, the synth, and the pauses. It’s interesting but jarring, making for a weirdly uncomfortable listen. (Fun fact: Taiwanese girl group Misster covered the song in 2011.)

The song closes on a lighter note with “Save Me,” a subdued dance track about a guy so in love he needs to be saved by the girl he loves. It’s sweet and cute with lyrics like “I’m in love like the ones you only hear about or see in the movies.” The song has a light electronic line that drives it, but the song is not particularly memorable even if it is adorable.

Plainly evident from this album and their live performances, SHU-I has strong vocals, which reminds me of rookie group MR.MR, though SHU-I uses rap in their music. However, they rely mostly on the strength of their singing to sell themselves, and SHU-I is certainly successful at it in all of their music, which is quite strong.

Many groups lack music that’s different, and it seems to be increasingly difficult to set themselves apart musically. While SHU-I is not doing anything revolutionary, they have a great variety within one album that makes this a strong album for their return to the Korean music scene. Now, they just need to widen their popularity to get their name out there because they deserve to be known more.