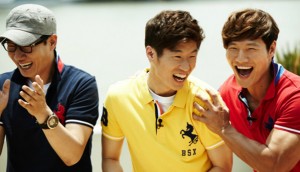 Following our polls for the most underrated release and the drama you wanted to see reviewed is the guest variety appearance you wanted a spotlight on! It seemed like there was a clear frontrunner almost doubling all the competition: Park Ji-sung on Running Man. But unfortunately, his last Running Man appearance before the deadline of June 29, 11:59 EDT was in May of 2012, several months too early for 2013. The only thing he showed up in by that deadline in 2013 was Minho‘s leg of SHINee‘s Some Wonderful Day vacation. And let’s just say writing an article on his variety prowess there–the surprised expression on his face when he saw Minho, the emotional and serious moment when their hands touched, both signs of a true variety master–would not be easy.

Following Park Ji-sung was MBLAQ‘s stint on SNL Korea 4, Jung Woo-sung‘s appearance on Running Man, Key and Minho’s invasion of We Got Married, and Infinite‘s latest set on Weekly Idol. As votes were incredibly close, with a difference of one between MBLAQ and the rest, I’ll be including all four appearances, giving greater coverage to MBLAQ’s win.

And a warning: spoilers lie ahead, so proceed with caution! 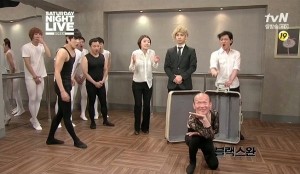 MBLAQ has always been known for their variety skill. They work hard on set and naturally have charm and wit that works well no matter the other castmates, but best when it’s the group together. And that was shown in some of the skits the group engaged in: “Step by Step,” “Black Swan,” and “Star Trek” with all of them having roles in additional skits like Thunder‘s naughty behavior in “I Live Alone” and livening up “Weekend Update.” Lee Joon even made a return to SNL to reprise his role as Black Swan alongside model Miranda Kerr and actor Lee Bum-soo. Of the skits MBLAQ participated in, three highlights were “Step by Step,” “Black Swan,” and the “Cruel History of Group Work.” Each is good for different reasons: MBLAQ making fun of MBLAQ, clearly 19+ content, and when G.O the project leader snaps, respectively.

“Step by Step” is a favorite as it shows MBLAQ confidently making fun of themselves, an aspect that’s essential to being a good variety guest. Frequently, the best way to deal with any flaws or shortcomings is to face them head on, and that’s what happens in this skit. Seungho openly admits his anonymity as the leader of MBLAQ while Lee Joon mourns the end of his couple on We Got Married, a situation that is honestly made funnier since it wasn’t a simple ending. Mir makes mentions of his countryside origins and weak body, G.O talks about his infamy for poor acting on Love and War, and Thunder ends introductions with, of course, mentioning that 2NE1‘s Sandara Park is his sister, something that gets mentioned pretty much wherever they go. What makes the skit funnier is that the scenes of all the members trying to chat up Kim Seul-gi by mentioning their shortcomings are juxtaposed with passionate hip thrusts and facial expressions at the thought of kimchi-fried rice, MBLAQ’s supposedly favorite food according to Lee Joon. They sure to do know how to get a girl.

“Black Swan” does a good job of the toeing the line before the overtly sexual motions become uncomfortable. For this one, Mir and Thunder play ballet students; Lee Joon is to be the Black Swan but the teacher deems him not ready for the role yet, and G.O makes a short presence as renowned dancer Sergei’s manager. The skit starts off with laughs as the men are clothed in tights and shirts, causing them to instinctively cover their groins unless they’re dancing or stretching. When Lee Joon is forced to entertain a challenge to his Black Swan position, it becomes clear that the skit takes a sexual direction by the hand movements, hip thrusts, the passionate partner dance between Lee Joon and Ahn Young-mi, the dance instructor, and pretty much every facial expression Ahn makes.

The strange fixation resulting from the scene is broken when the turn goes from sexual to avian as mimicking a bird and having louder caws becomes a priority. Essentially, it becomes a battle between Lee Joon and the other comedian as to who can caw and make a fool of themselves to the greater degree. The skit is only made better by the presence of G.O with a ridiculous wig and “Sergei’s” enthusiastic dancing. Lee Joon shines in this skit, from his initial hesitance to his immersion in the role as the erotically literal Black Swan. And it’s a good chance to show off some ballet skills (at least at first).

“Cruel History of Group Work” has only G.O and Lee Joon alongside other SNL cast members, and G.O gets major accolades for this one. He plays the unhappy project leader well, shows no hesitation with his cursing, and wields his surprisingly effective Sociological Theory book (ironically enough) with the wrath of a former pushover. The very set-up of the skit is amusing from the other group member’s excuses to G.O’s exceptional homing skills on his members to the comical injury scenes. G.O’s laugh at the end after notice of his sole high marks is just the icing on the delicious cake. The entire set is far from terrifying and puts on-screen an exaggerated representation of the results of group work anguish that most have probably felt.

As a whole, MBLAQ lived up to expectations by willingly discarding their idol image for a night of not-so-wholesome laughs for their turn on the 19+ show. 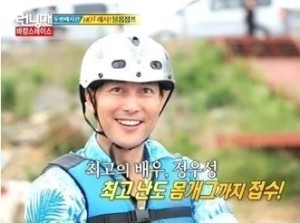 Jung Woo-sung rarely comes on variety programs, but his appearance on Running Man, spanning two episodes, was a good one. His tendency to turn everything and anything into a strong action movie scene contrasted nicely with his untapped variety side, unexpected sensitivity, and unintentional gags.

His first episode meshed with his usual strong character: God of Death with 108 eyes (cameras), ready to rip nametags based on the order determined by associates Haha and Lee Kwang-soo. After a quick tutorial on nametag ripping, Jung was able to take out opponents quickly after finding them, his speed and light-footed steps proving to be lethal. But his rookie mistakes showed in attempts to play the Running Man‘s spy game against the opponents, namely Yoo Jae-suk and Han Hyo-joo, losing valuable time and showing that although his tries were valiant, it takes more to fool a regular member. His strength was impressive when going against Yoo and Han, but their efforts triumphed over his.

The second episode was considerably lighter, taking on a vacation tone, flower shirts and all. The highlights were Jung Woo-sung’s unintended body gags as he attempted to stay on the blob jump, his “variety rookie” determination and eagerness for every challenge, and his win against Kim Jong-kook in the nametag game, leading to an ultimate win for his team. All in all, not a bad set for the actor.

SHINee’s Key and Minho on We Got Married 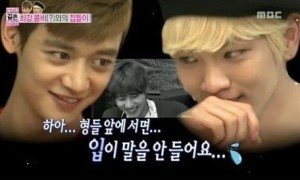 SHINee’s Key and Minho are a same-aged terror for the younger Taemin. But to give the “innocent love” couple an appropriate push and reveal more about Taemin while berating him all the way, there’s nothing like the older members for the job.

Their visit started off jovially with entrance by window when Taemin and A Pink‘s Naeun made their guests wait as they hurriedly tried to finish preparations. From commenting on Naeun’s meal to forcing minor touches like a hand on the shoulder or a hand on hand for cutting the cake, Key and Minho made the broadcast significantly livelier. Key’s reprisal of his role as WGM‘s dating expert–for the third time–helped let the couple get to know one another better while humorously showcasing minor bickering between the older two. While a large part of their segment involved berating Taemin for one thing or another, the two helped bring out some of Taemin’s better moments, such as his staunch defense of Naeun’s cooking.Their constant attack also helped create a bit more solidarity between Taemin and Naeun while forcing the two to reveal things they may not have while alone.

The best part? Minho and Key leaving out the front door but calmly returning through the window to successfully freak out Taemin and Naeun. 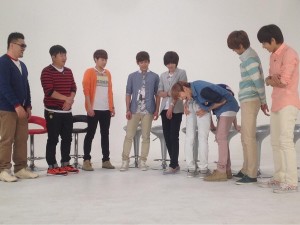 Infinite has always been welcome on Weekly Idol as they were the first guest and have made multiple additional appearances, sometimes for special episodes, to host, or to even provide a segment outside of the simple Weekly Idol set. So it’s no surprise that their episodes on Weekly Idol are full of familiarity.

Initially, for those unfamiliar with Infinite, the jarring nature of unveiled insults can seem off-putting, but for fans somewhat invested in the group, their episodes are always a treat. For their “Man in Love” promotions, Infinite got two episodes on Weekly Idol: plenty of time to allow Dongwoo to describe and grope everyone’s butts, to show that Sungyeol is utterly confused about choreography when members are missing, to inform us that Sungjong‘s eyes are almost double the size of Sunggyu‘s, and to demonstrate that yes, some members will go painfully lower in a split if it means getting closer to winning meat.

One of the best parts about Infinite’s episodes is that the members give as good as they get and can do so due to the close relationship between the group and the hosts. Jung Hyung-don and Defcon are aware of this, and it’s why they can push the group to do some of the stranger things (e.g. Dongwoo’s butt evaluation).

K-variety shows are a large part of why I’m still interested in K-pop. The shows provide insight into personalities or other abilities of guests from other professions that don’t adequately allow those traits to be shown. Particularly for idols, it’s a good way to connect with fans and strengthen that fan-idol bond.

Your top picks were highlighted here based on your votes. But what are your thoughts on the guest variety appearances?