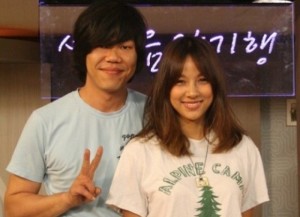 Their agencies may be back-flipping on what exactly is going on with Lee Hyori and her boyfriend Lee Sang-soon; but they seem to have more or less let the cat out of the bag when they confirmed reports that the couple were planning to marry.

According to rumours, the couple of three years have already printed the wedding invitations for their September nuptials. Hyori’s been vocal about her disinterest in marriage, which drew backlash against her. She did, however, admit during a radio interview in May that if she were to marry, she would want musician Sang-soon as her husband. The couple have dated openly since 2011, but we’ll have to see if they really are joining the current Hallyu wedding rush.

In other more concrete dating news, Won Bin and Lee Na-young have confirmed that they are dating! Following another Dispatch scoop, the pair’s agency released a statement on their behalf confirming that they have indeed begun seeing each other.

Congratulations to the new couple — and hopefully for the engaged couple as well! Feel free to share your felicitations (or laments) in the comments below.