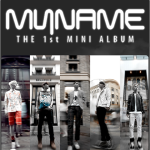 Boy group MYNAME has released their first mini album in Korea, which includes their movie-style MV single “Baby I’m Sorry.” This is not to be confused with B1A4’s “Baby I’m Sorry” which is as different from MYNAME’s MV as day is from night. As far as all of us can tell, MYNAME hasn’t done much in the Korean market. They debuted at a time when there were already a huge number of boy groups competing for attention and their releases have mostly fallen into obscurity. To combat this, they’ve been making a name for themselves in Japan, but the shock value of their new MV might just be the thing to sky-rocket their name out of anonymity.

This high-budget MV was produced by Zany Bros, who have also worked with B.A.P, and the crisp video and editing are to be expected from an almost eight-minute long MV. Actor Yoo Oh-Sung and K-1 fighter Chu Sung-Hoon are also featured in this MV, which adds more “professional” flair to the video’s dramatics. I’ll give you fair warning now that “Baby I’m Sorry” is not for the faint of heart — there is quite a bit of graphic fighting interwoven with heavy, emotional scenes, so watch at your own risk.

Maybe I sound like an old lady, but the amount of gruesome violence in MYNAME’s new MV wasn’t my cup of tea. It isn’t that there is anything wrong with a theatrical usage of blood to emphasize the severity of injuries, and it isn’t that real violence doesn’t happen every day, but rather the fact that watching a music video isn’t something I’m expecting to need to recover from. If you’re planning on watching a violent movie, you roughly know the plot ahead of time, and you’re generally prepared for it; but with an MV, how does one go in expecting a full scale mafia-style mass murder of its singers/leads?

“Baby I’m Sorry” was like a combination of B.A.P’s “One Shot” and LC9’s “Mama Beat,” with all the dramatic story of the first, and all of the over-exaggerated blood spray and head-bashing of the latter. The combination of the concepts makes this MV ten times more intense than either of the other two. In other words, it isn’t surprising that this MV is rated 19+. This begs the question: why the sudden spike in violent MVs from boy groups? Perhaps, the definition of “masculinity” is changing and that raw violence will become the norm that tailored suits and dancing in white rooms used to be. 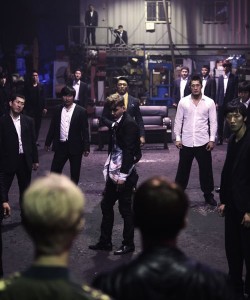 There has been a trend towards violence recently in boy group MVs. It isn’t just dramatic screen violence itself, though, but also the overall “tough” image being associated with violence and delinquency. The messages in the lyrics of the songs aren’t normally encouraging this type of behavior; they mostly have nothing to do with the MVs anyway, but it is still a noticeable proliferation in this type of imagery.

Even if the lyrics are saying “don’t get involved in this kind of life” the visuals of the MVs are still showing intense and unsettling scenes. In “Baby I’m Sorry,” for example, the same story line could have been done with much less blood splattering and still been intense and moving.

Basically, two friends grow up and end up working for rival companies/mob bosses/politicians, or whoever those men are supposed to be, and this leads to the murder of one and subsequently the murder of the rest of the group. As far as story line goes, the excessive deaths weren’t necessary but were used to create a more emotionally evoking sort of ending. The story could’ve stopped after one friend died, they could have all cried and learned their lesson from that, but instead they chose to go the route that would really wring the emotions out of the viewer. The saving grace is that the acting by the members of MYNAME is actually passable. 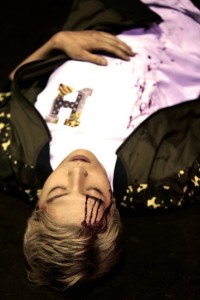 Too often a group tries to do an action-drama MV and it just comes across as corny because the group members simply don’t have enough experience with serious acting. In this case, even if the story was a little over the top, the acting was believable, which added a lot to the emotional experience for the audience.

If you get stabbed in the stomach you are probably going to be calling for your mother and it was little touches like that moment that made the acting stand out. Anyone can learn a choreographed fight scene but it is the emotional moments in between the action that need to be executed properly for a story to come together.

The MV itself is excellently made, despite all criticism. It really does feel like a short film instead of an MV. Of course, it isn’t the first of its kind. The long drama MV isn’t exactly common in K-pop but it is certainly a genre of its own. Some other recent MVs of this style include Speed’s “That’s My Fault” and T-ara’s “Day by Day.” When you consider these two multi-song epics, “Baby I’m Sorry” seems practically short in comparison. Fortunately, the director was able to maximise the video’s duration, and this has turned out an MV that feels complete. It was just complicated enough to have depth but still simple enough to need minimal explanation. 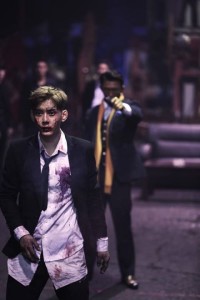 As for the styling in the MV, it was perfectly done for the story. The amount of perfectly-fitting, expensive-looking suits was exactly right for a story involving organized crime. The members of MYNAME pull off both school uniforms and business-wear convincingly, and their causal clothing were selected to fit each person’s body and personality. The clothing was done like it would’ve been done for a movie — instead of how coordinators would normally style for K-pop MVs — so there weren’t any overly-garish or out-of-place outfits.

Watching this MV was certainly an experience. Hopefully, the fact that it is rated 19+ won’t lose it too many viewers. Although the fighting and violence was a tad over-done, the rest of the story, acting, and emotions were well executed. My fingers are crossed for this MV to be the edge that MYNAME needs to solidify their recognition in Korea. Overall rating: 4/5.

How did you feel about the level of violence in this MV, readers?