Kim Hyun-joong is Back for 'Round 3' 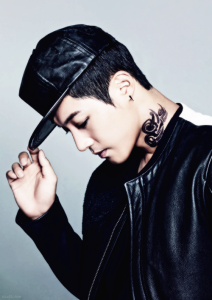 Nearly two years have passed since Kim Hyun-joong made his last release: mini-album Lucky. With its more funk-influenced promotional single “Lucky Guy,” it was a considerable change from his solo debut Break Down and the single of the same name, which had obvious hip-hop roots.

As soon as the announcement of his return to the Korean music scene came out — he’s been focused on Japan for the past year — this writer became admittedly skeptical. Which direction would Kim go? While “Break Down” and his overt shedding of his flower boy image was my first taste of him and what drew me to him in the first place, “Lucky Guy” seemed to suit his vocals better. But as soon as teasers rolled out, it became imminently clear that Kim would return to his debut sound, in Round 3.

And it couldn’t be more obvious than on the opening track and first released single “Unbreakable.” Featuring Jay Park, the song is perhaps more heavily influenced by hip-hop than “Break Down,” though the music video veers away from feeling like a forced attempt to seem as “urban” as its predecessor. This song is also considerably more complicated musically as it features somewhat cluttered layering with lots of sound effects and background shouting.

Some variety in his vocals could have benefited the track since they sound similar between the verses and the chorus. The track is not perfect, as his thin voice is more obvious because of the contrast between it and the heavily layered music, but it still makes for a fun club or party song, especially with its catchy beat. And Jay Park’s feature, as Pat pointed out in discussing the music video, suits the song because he doesn’t overpower Kim, though I have to say it’s more evenly matched because of Park’s stage presence.

The next song and single — the music video is set to be released on the 29th — on the album “Your Story” is actually a rehashing of the song of the same name from his Japanese album Unlimited, released last year in December. It still features much of the same sound, including the acoustic guitar. Instead of piano, it now has a drum machine beat and a synth line, which changes the feel of the song. While the original is more of a rock ballad, the new version, featuring Dok2, is more R&B.

While Kim Hyun-joong is no vocal heavyweight, he still has a rather pleasant voice and he knows how to work with it. Simpler songs in particular, such as ballads, help him because they don’t overshadow it, and “Your Story” is a better pick for a single than “Unbreakable.” While “Unbreakable” is dance-heavy and sexy, which is perfect for performances, “Your Story” is slower; the latter is a little more generic as well, and it allows him to utilize his vocal skills.

Keeping on with the slower tracks, “Like Before” follows up and is a more soul-influenced ballad. With its beat and driving guitar, it suits Kim’s voice the best out of any track because it’s ever so slightly lower, which makes his voice sounds fuller. With lyrics about a girl who has grown distant, he also emotes nicely, making for a lovely track.

We return to a more party sound with “Gentleman,” though it’s still subdued. Coupled with a light summer feel, the song’s story touches on the masculine side of things — how it’s really quite awesome being a gentleman. The song is much simpler and typical for a Kim Hyun-joong release since it features a faster beat and a simple musical line to drive it along with his voice. Where “Unbreakable” is cluttered, “Gentleman” is stripped down, though it’s just a bit too much. The song picks up more in the chorus but especially toward the end with the hook, beatboxing and some great ad libs.

The next track “I’m Yours” is a direct echo of “Your Story” with the R&B beat and acoustic guitar. Even though it’s somewhat slower during the verses, it picks up to a more pop-sounding ballad at the chorus. It’s a sweet track with lyrics about the feeling of love at the start of a relationship, but there is somewhat of a downward slide in momentum as the overall composition comes off as being bland. 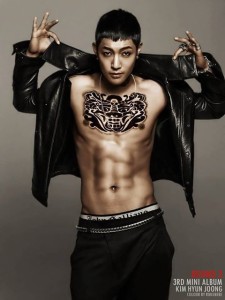 The album reaches its final minutes in the form of upbeat “Let’s Party,” which as the title suggests, is a party song. Kim even sings “move that body” several times, and with the zinging electronic music driving it, it definitely succeeds in that aspect. There is great range and variety between the verses and the chorus, building and speeding up at the bridge. It’s a strong song, just a smidge bare. It could use a heavier beat instead of the drum machine to ground all of the electronic music, but it’s still a well-constructed song.

Steven Lee, who has produced Kim Hyun-joong’s previous albums, obviously favors simpler electronic tracks, which work well for Kim. The downside to this is that the album comes together with less of a punch; it needs something more (or something heavier) to make the release more impressionable.

And with the use of traditional Korean tattoos on the teasers, one would expect that Kim Hyun-joong was going for something different, melding traditional with modern as he does in the concept of the music video for “Unbreakable.” Alas, he does none of that musically. While Round 3 is fine, it’s nothing special. The songs are catchy, some more so than others, but they don’t wow, even if Kim Hyun-joong’s body does.