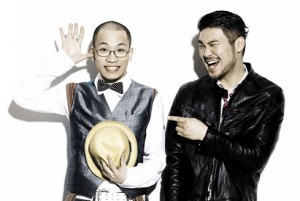 Hello everyone, and welcome beck to our weekly music show recap!

After being cancelled following news of the Asiana plane crash, Inkigayo returned with its mid-year special of “remix” stages. The winners of the cancelled episode was revealed on the website to be first timer Girl’s Day (congratulations!), and this week’s  winner will also be announced online.

The other trophies of the week went to another first time winner: after over a decade in the business, Dynamic Duo took out everything from Show! Champion to Music Core with new song “BAAAM.” Congratulations to Choiza and Gaeko! If you’re interested in learning more about the hip hop pair, check out our recent spotlight on them, as well as a selection of their B-sides.

Meanwhile, 2NE1 made their much anticipated comeback, as did Ailee, John Park, Shu-i,  and A-jax. New girl group BESTie also made their debut with “Pitapat.”

Here are my picks for this week: were they yours, too?

Look, it’s Shinee in almost normal suits! The sepia colour scheme looks as amazing as the boys sound here: I loved that falsetto after Key‘s first lines, and this is literally the best I have ever heard Minho sound in a “Dream Girl” performance. That boy was on fire. The dance break was unnecessary, but the instrumentation was great and no one stuffed up, so I can’t fault it.

“Bar Bar Bar” is fast becoming popular, with everyone and their twin brother “jumping eh jumping” on the bandwagon. Even the Sketchbook audience, who normally maintain a respectful silence, were cheering for them (though that could also be their awesome fans). Crayon Pop had been involved in their own Ilbe scandal recently, but they have fortunately managed to recover and even prosper since. “Bar Bar Bar” has been my jam for some time now, and here’s hoping for more fun tunes in the future.

The beachy props set the scene for 2NE1’s summer single. The laidback vibe definitely had an effect on the cameraman, as viewers were spared the usual camera tricks. There wasn’t enough Minzy (though, let’s face it, there never is), but this stage looked like fun. If I were to huddle close enough to my little radiator heater and close my eyes, I can almost myself imagine frolicking with 2NE1 on a fake beach.

The last thing I want to do with an injured ankle is dance, so I’m even more in awe of Ailee, who kicked off her latest round of promotions with a bandaged foot encased in heels. The choreography was said to be changed to compensate for the injury, but that’s still a high amount of movement happening on stage. Ailee’s voice, however, is still as amazing as ever; I haven’t yet heard the rest of A’s Doll House, but I have a feeling that I’m probably going to like it.