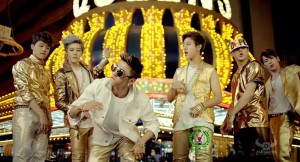 It’s a hot, hot summer and in the midst of the past week there were a lot of hot come backs including B.A.P.’s “Hurricane” with its MV shot in Las Vegas. Not sure if it’s the heat, but one of the first things I thought of when seeing this video with their gold clothes in front of downtown Las Vegas’ Four Queens hotel was “it’s a good thing there aren’t only four B.A.P. members…”  Now on to the non-heat stroke induced musings on K-pop.

The following are the top 5 Things that happened in K-pop last week that I think are a bit more special than the rest. If you’re not up-to-date on your K-pop happenings and don’t like spoilers, turn back now or forever hold your peace.

The variety show starring Kim Soo-ro, Seo Kyung-suk, Ryu Soo-young, Son Jin-young, Sam Hammington, Jang Hyuk, and ZE:A‘s Hyung-sik takes these 6 male celebrities and drop them into a military unit for a week to show fans the life of a soldier in the ROK and the hardships as well as the comradery they go through while in service of their country. In this segment, the units have a cheer competition and Kim Soo-ro pulls some of his moves to help lead his team to victory. ZE:A‘s Hyung-sik has been a nice addition to the show after the departure of MBLAQ‘s Mir— he’s the ultimate wide eyed and innocent maknae learning the ways of a man in the military from his hyungs. The show is part of MBC ‘s 1-2 punch along with Dad! Where Are We Going? that have taken over Sundays in ratings.

Korea’s “Techno Queen,” Lee Jung-hyun, makes a come back after three years with “V.” The song is being billed as electronic swing/pop and is a lot of fun.  The kicker though is the MV, which is directed by PARKing CHance, a collaboration of the famous Park brothers: Park Chan-wook, South Korea’s most famous film director and creator of such epic movies as Old Boy and Thirst and his younger brother Park Chan-kyong director of films such as Night Fishing—I’m amazed that she got the brothers to work on the MV with her. The MV is of the horror/humor genre–those two categories never really go together in my mind–but makes for a fun MV in this case.  Definitely reminded me a little of Tim Burton‘s Corpse Bride.

3. I Live Alone With Exo

Kangta recently joined the cast of I Live Alone after the exit of Seo In-guk and  he’s been a fun edition. When not taking care of his four dogs at home they’ve also showed him exercising and having to get some mile to drink with some extra spicy Korean food. Fans wondered whether or not we’d see some of his hoobaes on the show and those who guessed we would–were correct. Here’s a recent clip from the show where he buys pizza for Exo and visits with them telling them about how things were back in the day as they eat pizza and listen to him with eyes glazed over. It was hilarious when in the beginning of the clip he said he wanted to put their names on their clothes like sports jerseys because he still can’t tell them all a part and when at the end his leg fall asleep and he had to limp away after the visit. I hope his image survives this show.

The K-variety Show Me the Money 2 is already in full swing and I’ve just recently caught up with the show. One of the surprises of this season, was that rapper Swings (aka Jonathan Moon, Moon Swings a former member of Uptown) was one of the contestants.  He’s a pretty well known underground rapper and has worked with the likes of Yoon Jong-shin and Big Bang‘s Taeyang, but I guess he must have met the conditions for competition.  Here’s his latest performance on the show, “Do You Know Hip Hop?”

One of my current K-drama cracks is the hit I Hear Your Voice–I anxiously await,yet dread (for all the murder like stuff they think of) each episode. It has just the right amount of sweet, scary, and suspense for my taste and apparently a lot of other K-drama lovers as it is the current ratings king among dramas reaching over 20%. Here’s one of the sweetest segments yet from last week’s episode as Soo-ha tip toes around Hye-sung and follows her like a penitent puppy after admitting he had been lying to her about getting his memories and mind reading ability back. In the end, Hye-sung can’t fight it anymore and finally verbally tells Soo-ha that she has feelings for him not only as a dongsaeng and friend, but as a man. The drama has been extended by two episodes to 18 so we’ll have two episodes this week and two next week to continue our love affair with I Hear Your Voice.

Those were the top 5 Things I LOVED in K-pop this past week, were they yours?