Sistar Is Ready for Summer with "Give It to Me" 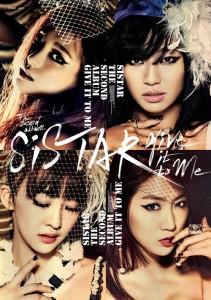 Just in time for summer, Sistar is back with their second full-length album Give It to Me, and they’ve paired up again with producer Duble Kick — formerly Duble Sidekick until the team expanded and created their entertainment company dubbed Duble Kick Entertainment. The foursome first worked with the production team last year with their summer release “Loving U,” a breath of fresh air in their Brave Brothers dominated repertoire, and they apparently liked their last collaboration and returned. I don’t blame them.

Despite their sexy Moulin Rouge concept for the single, the album as a whole is pure summer-y pop. It stays on the light and cute side for the most part, but the season does beg the style. The album doesn’t start that way though.

The intro track “Miss Sistar” misleads listeners, just like their concept. The song features Duble Kick and Joo Heon in a disco track that follows the same trend of other artists such as Shinee and Seo In-young with their retro-inspired songs. It’s a great song and would have done better as a complete track because it really doesn’t serve as an intro. While it sets the perfect tone for the single, it is nothing like the rest of the album.

The promotional track “Give It to Me” is definitely a show tune from its piano-based melody to the lush strings that fill out the track perfectly. Even with the strains of guitar thrown in there, this song shows a new side to Sistar. It reminds me distinctly of Broadway musical Dreamgirls but with a K-pop twist, especially with the music video‘s setting on a stage.

In the vein of “Alone,” the song is about being alone and wanting love, and it effectively shows and strangely without leaning on the R&B side as the aforementioned track. The girls all sing in higher ranges, but it’s never whiny. Instead, they almost sound like they are whispering, giving a sensual but desperate edge. Of course Hyorin does it well, but even Dasom, whose voice tends to be on the thinner side, masters this style. Soyu’s voice though is best as it gives the song the right amount of anguish.

Bora’s rap, on the other hand, is completely unnecessary. Besides the fact that she has never been a particularly talented rapper, her rapping style really breaks the mood of the song. It would have been better had she matched the desperation of the others in her rap with a softer tone. Instead, right before the climax of the song, she throws everything off and sounds flat emotionally. 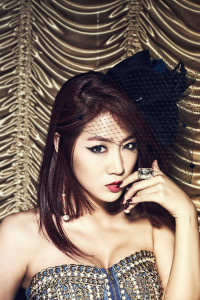 With such a sumptuous introduction, Sistar then leaves all of glitter and smoky eye behind for the rest of the album. They shift gears with “The Way You Make Me Melt,” an acoustic R&B track featuring hip-hop duo Geeks. Going in the complete opposite direction from the distress of “Give It to Me,” this track is all about a girl being so head over heels in love with a man that he makes her melt, metaphorically speaking of course.

The track is sweet, and the acoustic line throughout is lovely and its fading in and out of the background as the song goes on works. But Geeks, providing the male perspective in the relationship, is the highlight of this song as their voices and rapping styles work with the light but mellow tune.

Apparently, that love didn’t last long. “Bad Boy” follows up next and is about a guy who is never around and claims to be busy, never answering the phone. When they do get together, he’s always checking out other girls. The music though sounds surprisingly upbeat and happy. While it has a hint of sadness in their voices, it just doesn’t strike the right chord to match the lyrics.

But that doesn’t mean it’s a bad song. It’s actually incredibly catchy, and their voices meld together nicely. Dasom and Bora in particular stand out to me as Dasom’s voice sounds surprisingly full, and Bora’s rap actually goes with the song, entering and exiting rather seamlessly.

Perhaps the perfect track to encompass the sound of the entire album, “Summer Time” might have been better as an intro. The song is all about being in love in summer and follows through on that perfect with a happy dance-pop style. It’s a fun listen but nothing memorable. It doesn’t help that the phrase “I got a feeling” has forever been ruined for me thanks to the Black Eyed Peas, even if the songs sound completely different.

Following the happy and cute sound, “A Week” uses piano and synth to express the nerve-wracking feeling of a crush. The track is about a guy and girl who like each other, but neither has confessed yet because they’re too shy.

It’s cute though not special. It’s nice and upbeat, especially with the piano, but the chorus seems to be lacking something. The high point would definitely be Bora’s rap though. She subdues her voice, at least at the start. She eventually goes back to her typical style, but that moment where she almost sounds like she’s caressing the microphone is perfect but unfortunately lasts just a moment.

Sistar finally slows us down with “Crying,” a ballad about a girl who regrets ending a relationship. The song has a nice jazzy feel to it, and it’s lovely to hear Hyorin and Soyu dip into the lower end of their ranges for the verses. When it gets to the chorus though, the belting feels like a bit much and more for the bridge than the chorus. It isn’t grating though it comes close. 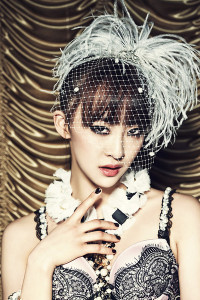 “Hey You” could have been my favorite song. With its fun, fast raps and heavy drum beat, this song is straight power pop. The opening beat sounds so familiar and reminds me of Avril Lavigne’s “Girlfriend” or ’80s hit “Mickey” by Tony Basil, but it’s different and so catchy that it hooks me right from the start. As much as I love the rap-driven verses, I wish the chorus followed through with the same style instead of changing so much.

Things take an interesting turn with “If U Want,” a track about a guy and a girl who like each other, but the guy doesn’t have any experience in relationships so she offers to help him. It’s such a different lyrical premise, but sadly the song is too simple and chugs along a little too slowly, making for a forgettable track.

The album closes up with “Up and Down,” a track about a guy who pushes and pulls, confusing a girl. Similar to “Hey You,” it has obvious power pop influences with its percussion-heavy sound though it definitely leans into the pop/rock sound with guitar. It’s a decent song, again fun and summery, but after so much of the same style before, it doesn’t sound different enough to stand out.

Overall, Give It to Me is a fun, summer album, essentially sticking to upbeat pop. There’s only one slow song on the entire album, but that makes it easy for many of these songs to sound the same, which unfortunately happens. There are definite highlights, but some songs just don’t stand out enough to be worth more than one listen.

Sistar has definitely grown, using their members more effectively on this album than in the past instead of relying almost entirely on Hyorin. It seems that this pairing with Duble Sidekick is doing them well. Let’s hope that things continue this way.