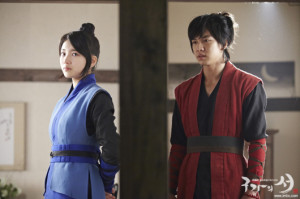 Last time we left Gu Family Book, the show had set up an epic, heart-wrenching back story that took six episodes to complete. After such intricate plotting, it’s inevitable that the next six would feel meandering by comparison. They tied up loose ends, divided the family unit, and slowed the pace to not give the audience a heart attack. We also learned that Kang-chi has a long way to go before he becomes the badass he’s meant to be, which is good considering the show is 24 episodes and we don’t want it to fall into nonsense-land. Conversely, for a show that likes to take its time, this makes for a hard slog during the middle episodes where most dramas lose us through mid-story ramblings.

However, Gu Family Book managed to pull through these crucial six episodes largely by dropping the gumiho mythology in favor of character development, especially for its female cast. While most of the male characters were confused, evil or pseudo-hypnotized, the women showed off their strength, determination and intelligence, giving Kang-chi time to absorb his new gumiho existence without making us want to smack him for taking too long. Since this current week’s episodes brought back daddy gumiho in a big way, let’s take a moment to reflect on the ladies who carried us emotionally through the dreaded second act.

One of the big themes of the drama is “fate” and whether a person can change their fate. This works particularly well for the women’s story lines. It’s present in the male stories as well through class and birthright, but the women in ancient Korea had the addition of gender deciding their fate, often in very restrictive ways. What Gu Family Book does so nicely is show a variety of different women, with different class distinctions and twists of fate, actively determining their own course.

First, can we please give a standing O for Lady Yoon’s death scene? Though her part was small and brief, Kim Hee-jung delivered what was probably the best dramatic moment in episode seven. As all of our characters have been jerked around by ultimate baddie Jo Gwon-woong, it was satisfying to see Lady Yoon rattle his cage. Though that unfortunately equated to killing herself, her last speech was so powerful, I nearly thought he was going to die on the spot. 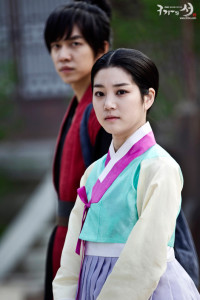 Lady Yoon’s daughter Chung-jo chooses a different but equally compelling route. From the beginning, Chung-jo’s story mimicked Seo-hwa’s, giving the poor girl double the fate. It seemed like her story was going down a boringly-familiar path when she was sold to the gisaeng house. However, then Chung-jo stepped in and refreshingly dictated her own story by choosing to stay in the gisaeng house and initially refusing to go with Kang-chi. The trait that Lee Yoo-bi brings out to set Chung-jo apart is her incredible pragmatism. This pragmatism meant she almost took the traditional path laid before her in the beginning, but when uncontrollable forces twisted her story every which way, she still landed on her feet. Perhaps the biggest thing that Chung-jo learns in this arc is that she can’t be “saved” by her past relations, and her life is irreparably different now.

The most horrific and disturbing event in the arc is Chung-jo’s rape in episode 12. However, the episode didn’t stop there and continued on to show her reaction afterward. It’s clear Chung-jo is scarred through the deadened look in her eyes, yet she goes to Soo-ryun saying she wants to be a gisaeng artist and start her life over. Her reaction is greatly contrasted to her brother’s, who nearly breaks down completely. Of course, his reaction is understandable because he feels responsible, but it also shows what rape meant for a woman during that time (i.e. complete ruin). We’ve also been set up with a previous rape where the result was suicide. Chung-jo’s reaction is sharply different. This is not to say that Chung-jo’s reaction is the “best” one, but one that sets her apart from other characters. Her character is exceedingly determined to control her life as best she can, even through the impossibly hard situations.

I now want Chung-jo to be the one to kill Gwon-woong, but chances are slim. Too many people want to kill that guy.

Then there is Soo-ryun, head of the gisaeng house. In these episodes we learn what’s important to her, how she views her profession and that she has much more heart than initially portrayed. In a rather intimate moment, Soo-ryun tells Chung-jo how life as a gisaeng can be more than pouring drinks and selling her body; she can learn new things and practice art, something that Chung-jo would’ve had minimal exposure to in her old life. One life is not better than the other, but that is the point: being a gisaeng does not have to be disgraceful, and for Soo-ryun, her work has meaning. This puts Seo-hwa’s disgusted reaction to gisaengs in a new light, illustrating how much that must have hurt Soo-ryun in the first episodes.

Though obviously not aged a day, Jung Hye-young pulls off showing us how age and experience has changed Soo-ryun. She is determined not to lose Chung-jo the way she lost Seo-hwa, which comes out beautifully in her showdown with Gwon-woong, another standing O moment. Until then, we could argue that Soo-ryun can postulate all she wants about art and learning, but at the end of the day the gisaeng house is controlled by the customers — men — and their desire. However, in this showdown where she decides not to let Gwon-woong enter, Soo-ryul is bucking that control. She is determined to stick to her ethics even though they mess up societal order, showing admirable growth in her character. 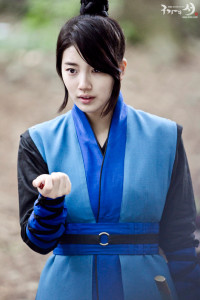 Surprisingly, the character whose personal development falls flat is our main lady, Yeo-wool. One would think that a female warrior would have some personal struggles to contend with, but it seems like Yeo-wool has had an easy time. She’s been raised in a privileged position much like Chung-jo, but as an audience we have no sense of the hardships she’s faced by taking a severely non-traditional route. Her dad obviously had no trouble training her to fight, and so far she’s had one misogynistic run-in, largely because not one, but two of our boys are in love with her and want to protect her. Yeo-wool is the character for the young, modern audience — she’s strong, talented, independent, wears pants — but she’s not had the introspective development that all the other characters are getting.

That’s not to say she didn’t have some great moments during these episodes, and her relationship with Kang-chi has thankfully come leaps and bounds. In fact, it is those relationship moments where Suzy‘s acting shines, but that is probably because Yeo-wool’s development has revolved entirely around Kang-chi. However, even in the relationship her autonomy seems slightly stripped. I question the writers’ decision to have her know from the beginning that Kang-chi is fated for her; it made her instant connection to him feel less specific to her character. Yeo-wool desired a relationship from the beginning, and having mysterious monk drop the fated one in your lap doesn’t leave much room for choosing. Yeo-wool doesn’t even try to question it, instantly supporting Kang-chi. It would’ve helped these episodes if there was more of her back story, unrelated to Kang-chi, so we could connect more with her personally.

Fellow watchers, who’s your favorite lady so far? How are we digging Yeo-wool’s character? And is anyone else mourning Gon’s hair change like I am?