Offroad made their debut in 2012 with the upbeat “Bebop,” bringing a light song that made little impact. This year they return with “Head Banging,” a song by Block B‘s Zico, hoping to bring some punch back into their career and catch some attention.

The direction of the music video seems to be more true to the group’s name as several of the activities are “off road,” so to speak, and adventurous. There’s parachuting, dirt-biking, road trips, and more. It all fits the theme of endless play and fun, just living life out to the fullest. The settings are all lively and good locations for the video shoots. The way the music video is shot and edited with hard lighting and a lot of choppy cuts juxtaposed with slow movements speeds up the action of the video, making it fit both the music and the content. There’s a disappointing lack of actual headbanging throughout the video though, making the title a bit misleading. 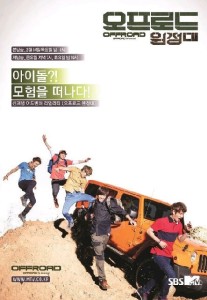 The most uncomfortable parts are the individual cuts for the members. Most of them have awkward movements and expressions, even through the sunglasses that they all wear. The members seem more comfortable as a group and throughout the shooting of actions scenes, scenes that seem to belong to the group’s show on SBS MTV: Offroad, The Adventure. The scenes are exciting and fit with the theme, truly going all out in some of the circumstances.

The music is an above average track, but there’s some type of punch lacking, especially for a song intending to express freedom of sorts. The vocals are decent, but mostly lacking in expression that could really take the song to another level. Since it’s about letting go, not worrying about others, and just having a blast, there’s room to go crazy, but the vocals are instead restrained, keeping the track at adequate.

On the subject of the music video itself, there’s nothing more to add. But there’s the awkward elephant in the room: doesn’t this all seem too much like a Block B song and video? To be clear from the start, the concepts themselves aren’t owned by anyone. Just like not all badass girl groups are automatically copying 2NE;, anyone is allowed to play around with similar concepts. But from the song to the lighting and some of the locations, and perhaps this writer has been missing Block B too much, but it’s all just too reminiscent of a signature Block B song, right down to the parts each Block B member would have — the part at 1:40 sounds almost certainly like something for Kyung. The song similarities at least makes sense: Zico did after all make it. But the similarities aren’t as present or strong in say, Zico’s influences in D-Unit‘s music. Of course, there are larger differences inherently because of the tendencies of girl group songs in comparison to boy group ones, but it does show that Zico is capable of making a track that fits a group, making it curious as to why the song for Offroad is so similar to Block B’s own style. 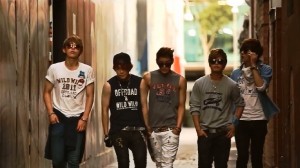 On that note, though I appreciate Zico using this time to gain experience and use his talents wisely, perhaps giving a song like this to a rookie group that has yet to firmly make an impression was a bit of a misstep. There are two ways to look at this. One is that this song might fit the group perfectly and be what they were missing. It could be the identity they wanted to build for themselves. The other is that it’s simply too early to switch to something that is difficult to associate as theirs when another group has already made such a strong impression with an incredibly similar sound. In this case, it seems to be leaning towards the latter, especially since the force of the song and their presence in the video really isn’t as strong as it could be to make a greater impact.

In any case, the music video’s strengths lay in the visuals and excitement it’s able to drudge up from the activities viewed. The music’s instrumental fits the action portrayed. The lacking aspects are in the group’s delivery both musically and on screen in their individual parts. Offroad is still working hard for recognition as a rookie group, but I hope that they grow into a more individual sound with greater abilities with their next release.

What did you think of Offroad’s latest? Leave a comment with your thoughts!