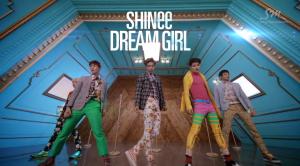 These days, grabbing a spot on music shows is hard enough, especially for newer groups lacking stable popularity. But it’s no longer enough to grab 3.5 minutes and leave. No, ultimate masters of the stage invade other parts, most popularly the encore stage. More importantly, their invasion is welcome by the victims, usually recognized as being “adorable” and causing uncontrollable giggling. Most recent culprits of this are none other than SHINee, easily creating their own stage out of anyone else’s, sometimes even purely by accident. It’s the mark of a true star when all stages become yours, and it’s impressive that SHINee has done it.

There are a couple different ways to explain how SHINee manages to fish out a shot near the end of the show, aside from just moving into the shot and stirring the hearts of all fangirls.

As Key is known for his ability to pick up on girl group dances, at the least, it’s unsurprising that the entire group chose SISTAR19‘s seductive seat dance on a bench that only seats three. While it meant that at least one member was completely off the bench at any one time, it was no matter as SHINee intense dance practice has done nothing if prepare the members for this opportunity. At other times, the group really gets into the choreography, even laying on the bench. They go to lengths other groups wouldn’t dream of going.

The most important part of SHINee’s ability to invade other stages is the fact that SHINee seems to know everybody. SISTAR19 wins? It’s time to imitate their dance and wave goodbye. 2AM wins? Clearly their “One Spring Day” performance is just missing flowers. Let’s adorn them and get away with it since it’s on broadcast. Infinite snags a win? SHINee hugs their way into more camera time. I suppose Key isn’t called Keymera for nothing. Lee Hi wins over SHINee? Jonghyun politely gives her a flower once and later attempts to lighten the situation and distract viewers from a clearly confused Lee Hi.

“Dream Girl” has had a good run, topping my expectations of how the song would sell, especially digitally. So it isn’t surprising that for many of these encore stages, if SHINee is not the winner, then they are the opponent that lost. As such, a good deal of the hugs or bows that make it onto the screen come from the simple courtesy of greeting and congratulating he who has done better. In addition, all encounters with Lee Hi seem also to be part of the courtesy of a senior helping a junior out, attempting to make the younger feel more comfortable on stage and even gain a little time to collect her thoughts. (Check out 5:10 and later below!)

Of course, a more logical way to get into that encore stage is to actually win on the show for that week. Resulting antics cause a decent amount of the stage to actually be broadcast, which is a joy to viewers everywhere. Sometimes, like for MBC Music‘s Show! Champion, we see Jonghyun and Minho do at least 90 pushups each while the remaining three members just do however many they each can (in three separate weeks). Other times, Taemin graces us with a strange set of aegyo using the trophy. And who knew that large Show! Champion trophy could be used as a hat! Or that the group might even try to put Taemin on Minho’s shoulders and use the other three to attempt to lift the two, with Jonghyun as the main support in the middle: in other words, a feat not feasible or even plausible. If we’ve learned anything from these stages, it’s that even after a gazillion push ups, SHINee can still belt out their notes (4:40 and after below).

SHINee have managed to worm their way into countless situations, much to the laughter of their fans. What makes their invasions sweeter is only that none of their advances are ever rejected, not even off to side as sometimes can happen. This progress can only indicate that in the future, we will be seeing SHINee in everyone’s stage, acting as the main cast to the delight of their victims. Perhaps SHINee’s (or SM‘s) plans to make a real SHINee World are slowly being realized? Baby steps, everyone.

What say you, readers? And who else’s encore stage would you like to see SHINee invade?