Michi-Go Off the Deep End with G-Dragon 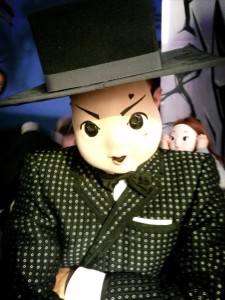 G-Dragon (GD), forever wowing us with his ability to come up with something even more bizarre than the last thing he did, has released his newest MV “MichiGO.” With its bizarre characters and insane props it immediately confused everyone that watched it (I’m joking, sort of). Since “One of a Kind,” GD has released MVs that are so off-the-wall it is difficult to decide if they are creative genius or random useless spam. While the MVs are unique in that they don’t resemble others in the K-pop industry, they resemble each other so closely that GD’s new “cray-on” image is beginning to feel like a parody of itself.

Where to even start? It would be nice to be able to say that this MV had a deeper meaning hidden in the insanity, but the lyrics certainly don’t express that, and it is difficult to pin-point a coherent theme in the MV at all. The only character that is relatable is the permed-haired, giant-footed student. He clearly doesn’t feel like he fits in with the rest of society, expressed by the creepy masked people, and he is also gifted with clown feet that make him the object of medical curiosity.

I can’t help but compare this character with the one in the book Even Cow Girl’s get the Blues. Both characters have the overly-large appendages and, although they are perfectly fine with their lots in life, the rest of society continues to view them as freaks or victims of misfortune. This character continues GD’s recent theme of portraying himself as a misunderstood outsider, which is a little ridiculous considering his level of fame and fortune. Sorry GD, no matter how crazy you act people will still remember your status as beloved, pretty-boy K-pop idol.

That is where the logical explanations for the MV stop. The rest of the visual stimuli and characters in this MV are mind-boggling, to say the least. Well, except for GD dressed up as a punk-ass bad boy (getting spanked no less), but that isn’t anything new for him and doesn’t seem to have anything to do with the rest of the MV. Despite its lack of relevance, the punk styling was the most attractive GD looked in this entire MV. The rest of the time the wigs he seems so fond of dominated any attention the viewer focused around his face because they were either gigantic or less than flattering (can we give up the bowl cut, please?). 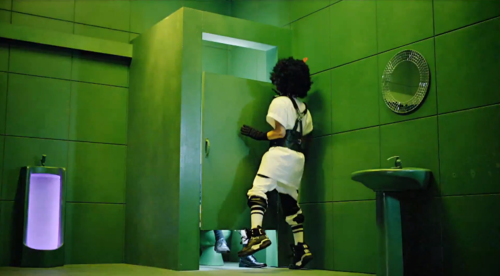 A good part of the MV was taken up by afro-wearing GD using a urinal in a lime green bathroom. Let’s just put the issues with the afro with a pick comb in it aside and focus on the utter absurdity of these scenes overall. GD wearing cow pants dancing around a glowing urinal is something out of my worst bar-hopping nightmares. There is always that one person that’s gotten a little too drunk and spends half of their night trying to succeed in the simple task of peeing and that is exactly what GD resembles. If you aren’t old enough to have experienced this wonderful phenomenon this analogy may not ring true for you, but trust me when I say it is correct.

There were a lot of scenes in this MV that made it seem like GD’s character concept was “stumble around like a drunken person.” Carrying a stack of books? Wobble until you fall over. Carrying stacks of boxes? Sway back and forth to keep them balanced. This brings up the question as to what these two scenes had to do with anything else in the MV. At least in the library scene the permed-hair student is hiding under a table reading a book, adding to his socially reclusive character, but he doesn’t seem to be related to the drunken book carrier with the goatee. Speaking of facial hair, now we all know what GD would look if he had it, and we can likewise encourage him to never grow any, ever. 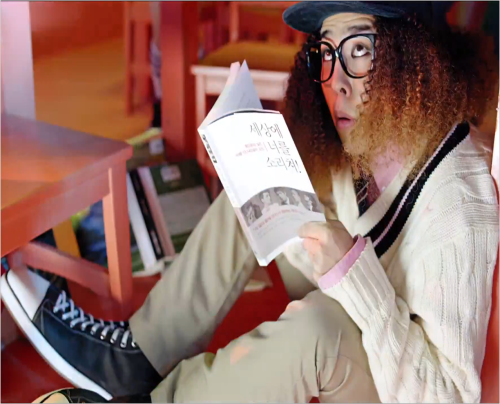 Even more out-of-place is the scene of GD dancing in the box warehouse. However, by this point in the MV it becomes a game of “why not?” Might as well have a scene where he dances in a room filled with brightly colored boxes while wearing a safety helmet. On top of that, why not dress up in a giant square hat and have a laser gun that shoots the letter G (a recycled prop from “One of a Kind”). The rhyme and reason behind GD’s artistic decisions gets lost somewhere between the time he had the ideas and the point at which they were edited into the MV. The last scene has the shy big-footed boy look as if he just woke up, leading us to believe that this could have all been a dream on the train. On the other hand, that explanation seems like a cop-out way to excuse all the pointless insanity.

In “One of a Kind” there seemed to be a theme of breaking out of his earlier images in the K-pop business and establishing his individuality. The lyrics for the song also expressed the message by playing on the rules and expectations he experienced in the industry. In “CRAYON” GD took his individuality and ran with the theme of being a crazy, yet swag, person. The theme made sense with the MV because the strange and unexplained imagery fit with the concept. “MichiGO,” however, seems like it is trying too hard to prove how crazy GD is. There isn’t a coherent theme or commentary in the lyrics or MV which makes the insanity pointless and self-indulgent. Yes, GD, we understand you want to be recognized as “different” but your argument is stronger when your songs actually have a message. 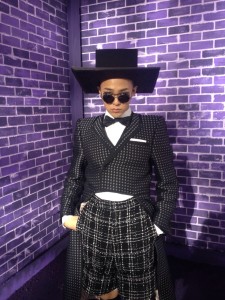 On the bright side, watching GD dance is always enjoyable. The effortless way he moves is impressive and he manages to make flailing look cool. For people who follow GD and the YG Entertainment family, there are a number of cameos that made the MV enjoyable. Teddy, Se7en, and Taeyang all participated in this MV, although that wasn’t particularly original either since GD has taken to including people in his MVs since “One of a Kind.” Still, it was nice for Se7en fans to get a last goodbye before he leaves for the army. On top of all that, it is impossible to deny that the weird imagery in this MV makes it transfixing. It is hard not to watch it over and over to try to catch any little clue about what is going on, so at least GD won’t be strapped for YouTube views.