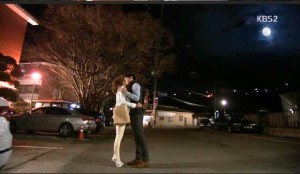 Another week of April, another week of K-pop.  Anyone else having a hard time trying to get into the K-drama You’re the Best Lee Soon-shin? I keep telling myself that it’s just setting up the story and will get better, but after 14 episodes… I’m not so sure anymore.  I love Jo Jung-suk and like IU so I thought everything would be great, but literally sometimes I just fast forward to the Yoo-shin and Chan-woo parts although the baker ahjusshi is pretty funny, too.  Well, I guess they have 36 more episodes to improve–aigoo why did I start watching a weekend family drama.

Oh well, on to everything else in the K-popiverse. The following were my fave happenings in K-pop last week, things that I think every K-pop fan should have seen.  If you didn’t know by now–spoilers lie ahead–and now you know.

5. Not Everyone Should Do Kwiyomi

It’s back to grade school for the members of Infinity Challenge as actor Kim Kwang-kyu is a special guest as their teacher  and child star Kim Yoo-jung as their first crush–which was a tad weird but funny.  First of all Kim Kwang-kyu gets some extra points for trying to reign in HaHa and Noh Hong-chul because seriously if I had to have kids like that in a class I’d probably quit.  Among the fun activities of the day, they also got Kim Yoo-jung to do kwiyomi and they really should have stopped there… really, a fully grown man should NOT do kwiyomi.

4. Cutting Loose on the Dance Floor

Rocker Kim Kyung-ho and his partner let loose with their jive number to the tune of “Footloose” on the last episode of Dancing With the Stars Korea season 3.  I think it was the perfect match of style and music for the duo.  I haven’t been enjoying the show as much as I thought I would (go, Fei!) because a lot of the time I find their song choice for the dances a bit bizarre–anyone else think so?

3. No Use Crying Over Spilt Eggs

It’s a lesson that Min-gook had to learn on the latest episode of Dad! Where Are We Going?  After Min-gook, Jia, and Junsu braved the chicken coop to gather eggs, they begin to head back to their dads when Junsu drops his baskets of eggs. It wasn’t done on purpose–it was just an accident–but Min-gook can’t hold back the tears after seeing the eggs on the ground. Junsu is the youngest of the group and a little 4D so he tries to play it off non-chalantly, but his hyung’s tears and his own guilt make him tear up as well.  The savior of the day was Jia who tried to comfort Junsu and then began picking up the eggs, most of them weren’t even cracked, and then went to wash them off (which they don’t show in this clip). No use crying over a couple of cracked eggs–you can always make an omelet, right? One giant point on the big girl scoreboard for Jia.

In an emotionally charged performance on the last episode of Immortal Song 2, 4Men brought the crowd to tears with their rendition of Shim Soo-bong‘s “Binari.”  It was just a beautiful performance, but what’s unbelievable is that they were beat by a rockin’ performance by K- indie band Rose Motel (who were Top Band Korea 2 contestants), who were in turn beat for the win by JK Kim Dong-wook.  It was a great night of music

G-Dragon released the MV for the single “Michi GO” and you either loved it, hated it or were like “WTF did I just watch?”  I loved it, but in general G-Dragon has been able to make a believer out of me in his music. I wasn’t too crazy for his styling–I almost never am–but the looks here matched the vibe.  I loved all his dancing and the crazy footwork in the MV.  It was fun seeing Se7en (aww!), Teddy, Taeyang, Yang-Gaeng (2NE1 stylist and GD bff) and a hilarious cameo by comedienne Ahn Young-mi getting down with GD.  There’s also talk that other members of the YG Family were in the MV behind the masks–I’m terrible at seeing these things so can someone please tell me who and when they appeared in the MV?