B.A.P to Invade the Pacific

That’s right fellow BABYs, your #1 head over feels rookie fangirl (aka me) is pleased to announce that the six aliens of B.A.P just might be coming your way! As recently announced on the official B.A.P Facebook page, this whistle blowing, noona-shaming, often blonde powerhouse group is plunging into the next leg of their B.A.P Live on Earth concerts with the B.A.P Live on Earth Pacific Tour! 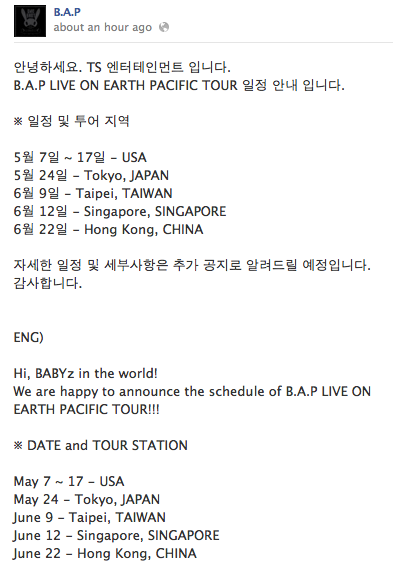 Though previously TS had only announced Live on Earth Japan, scheduled for May 24, it seems as though they are going to test the waters a bit more with a go big or go home mentality. Hopefully in the mean time the boys are able to get some rest and pull themselves together, as they have been almost continuously promoting since their debut in January 2012. In my opinion, member Himchan, who has been out of the promotional circuit due to an injury sustained during a car accident before the “One Shot” promo cycle started, will most likely return to the stage for this overseas endeavor.

Now, now, calm your ugly sobbing and your piercing screams! I don’t know whether the US tour dates say 7 ~ 17 because they have yet to negotiate an exact date or because the groups plans on actually being here for ten days, which is probably unlikely, but in the event that it is only date, it will most likely be in Los Angeles. To which I say, screw you Los Angeles why do you get to hog all the K-pop. But either way, I know I for one am going to max out a credit card for this concert, because the Lord knows I need more Yong-guk in my life.