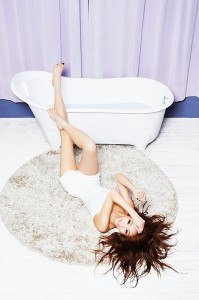 It’s about time for a G.NA comeback after the questionable direction “2HOT” was taking the talented vocalist. Her return is with another mini-album titled Beautiful Kisses and title track “Oops!” The album professes to fit G.NA’s personality well, showing off both the beautiful and cute aspects. The EP’s sound is also meant to fit the upcoming spring season.

The mini-album contains five songs plus the instrumental of the title song. It begins with the first song, “Oops!” featuring BTOB‘s rapper, Jung Il-hoon. The song is light and lets G.NA utilize more delicate tones that contrast well with Ilhoon’s raspier rap. Although the song demonstrates a return to a more sophisticated sound, it doesn’t cover a very long range. However, with Il-hoon’s addition, it doesn’t come off as stagnant as it may have been otherwise, especially for a title track. As many have already said, the song does seem more like a duet with Il-hoon rather than having him do a short feature, but that’s neither here nor there. The lyrics are unfortunate, more on G.NA’s parts than anything, as she seemingly plays hard-to-get with a younger guy.

Second in the album is the ballad “Mind Sync,” featuring Huh Gak. The song begins with Huh Gak’s smooth vocals, gently building up to the chorus without G.NA’s entrance. It isn’t until over a minute in that G.NA does begin in a similarly soft manner. Like in the previous track, this song too seems like a duet, with the time pretty evenly split between the two artists. One of the best parts of the song occurs around the three-minute mark, when G.NA takes over the melody from Huh Gak, who slips into a harmonious accompaniment that really isn’t long enough. The song as a whole is delightful, keeping the instrumental clean, with a focus on vocals. The subject matter is a familiar theme — mutual interest in returning to an old relationship — but it’s done well.

“Oh, Good!” is third in the line-up, bringing out a more overtly flirty song. It’s strongly reminiscent of “Black & White” in style, and as such, it’s no surprise that it’s one of the better songs off the album. I’d even push it for the title track if it weren’t for the immediate comparisons that most would likely make between this song and her previous ones. The whistle-like tones are ear-catching and the song moves along at an excellent pace. The chorus has a good hook as well.

The fourth song is “First Kiss,” a pop song that sticks with the upbeat theme of the mini-album and relates strongest to the album’s title. The recounting of a first love of the past is sweet and matches the sugary music well. In addition, the song manages to capture the elements of reminiscence, by not being outright happy; the melody alludes to maturity. The song sounds as if it could be played on a mainstream pop channel in the US due to its familiar structure and sound choice.

Last is “Hate It, Can’t Stand It.” The only distinctly sad song on the album, by way of its lyrics, it shows off G.NA’s range more than any of the other songs and is a good reminder of what she’s capable of doing as a vocalist. But where the ballad falls flat is in the emotional delivery. Without a look at the lyrics, it’s not easy to determine if she’s hurt or shy and singing about feeling the stirrings of love. There’s passion, but it’s not very pronounced or sufficiently specified. The ambiguous instrumental isn’t helpful either. Overall, the song sounds pleasant but needs more.

There’s something very palatable about this album. Its tracks are easy to listen to and enjoyable in the moment, though not all necessarily memorable. “Oops!” and “Oh! Good” are distinct among the songs, with “First Kiss” coming close. That said, some musical components seem to meld a little too well with American pop fare, an attribute that can benefit or hinder the album’s overall stylistics, depending on how you look at it. The bubbly image reflected here does seem to suit G.NA, which is a plus, but it all seems very safe and lacking of punch to draw enough notice to the album.

Did Beautiful Kisses draw you in? What were your favorite parts of the EP?