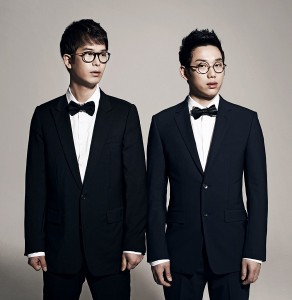 10cm, made up of Kwon Jung-yeol and Yoon Cheol-jong, is probably best known for their 2010 hit single “Americano,” released a couple of months after the duo’s first release, aptly named The First EP. Since then, they’ve also released two full lengths, also appropriately titled 1.0 and 2.0 in 2011 and 2012, and are gearing up for a solo concert on the 23rd of February entitled Fine Thank You and You?, the same as the title song of 2.0. Most recently, the duo released The 2nd EP to coincide with their concert, providing five new tracks for listeners.

The EP starts off with with the vibrant “Oh Yeah,” which contains a funky melody and fast-paced piano accompaniment. A highlight is definitely Yoon Cheol-jong’s guitar break in the middle of the song that switches things up between returning to the upbeat vocals. Vocalist Kwon Jung-yeol uses a healthy mix of variation for the vocals, skipping up and down his range for a fun song. This is also noticeably the shortest song on the EP, clocking in almost 45 seconds shorter than the next shortest: the three and a half minute long “Don’t Let Me Go.” The faster pace makes the song move by even more quickly, spurring multiple listens. The lyrics are equally enjoyable to read:

You melt, you keep melting me
I’m not an ice cream in the refrigerator baby
You bite, you keep biting me
I’ll tell you once more, I’m not a piece of candy baby
Wooo~ hold on, wooo~ hold on,
I didn’t say I didn’t like it oh yeah

You press, you keep pressing me
I’m not a button on a stove baby
You lie down, you keep laying on top of me
I’ll tell you once more, I’m not a sofa baby

“But I’m Sleepy” begins sounding almost childish with the piano melody and simple beat before expanding to a smoother set. As the song progresses, what seemed childish appears instead as brighter and appealing. The consistent tambourine really stands out when used to help keep the beat. The faint inclusion of brass instruments beyond the group’s usual fare helps elevate the song. This song seems most familiar from the five presented in the EP as staying closest to what the duo has put out before.

The EP quiets down with “Nothing Without You.” Tremulous and soft, the song’s start is pensive, slowly moving further and further with choice standout notes. The despondent admission is initially accompanied by only guitar before evolving to add drum beats and other tones. The fuller instrumental helps relieve the heaviness of the start, making the titular admission freer and less sorrowful, though even more hollow and desperate.

“Don’t Let Me Go” provides an upswing from the previous track with its faster beat and sweeter turn on vocals. The song still uses beats and guitar strongly in the group’s usual manner, but there’s also the slight integration of more electronic influences to switch it up a bit.

Last on the EP is “Morning Call.” The lazy beat still has movement despite the slower speed. The use of phone tones isn’t intrusive as it accompanies the guitar and melds into the song quite nicely, serving to highlight the instruments already there rather than stand out on their own. Also enjoyable here, like in “Oh Yeah,” is the time taken to let the guitar do its thing and carry its own melody for some variation.

The duo stays true to their instruments and sound, providing songs that tend towards an organic nature with limited processing. There’s sufficient diversity in the material to cover a variety of emotions and influences, with each song having its own distinct color. However, despite the simplicity of the instruments in some of the songs, there’s still more than enough emotion conveyed through vocals and limited incorporation of different sounds. The EP gives the listener a plentiful assortment in five songs, providing a 20 minute listen worth the time.