Rainbow's Syndrome Has the Golden Touch 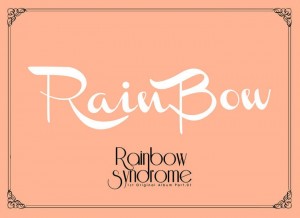 Rainbow are making a comeback in Korea, releasing their first studio album Syndrome on February 13. The 7-member girl group under DSP Media spent their last few years in Japan, releasing covers of some of their biggest Korean hits including “Mach” and “A” as well as an original Japanese song “Gonna Gonna Go.” There are definitely J-pop influences evident in this release, as the Valentines Day album overflows with aegyo and disco instrumentals.

While certainly a departure from some of their earlier work, 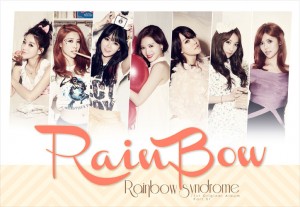 the album still spotlights the considerable talent of the members with challenging rhythms, minimalist ballads and dynamic raps. It’s also only the first half of the album — Syndrome part II, which does not yet have a release date, will most likely channel a more mature image, something that fans have come to associate with Rainbow.

“Golden Touch” is basically “Sussudio” with just enough dubstep to forever date the song to 2013. A description like that, however, undersells this peppy song’s charm. The track is absolutely over-the-top madness that manages to seamlessly incorporate a rap section amidst a checklist of 80s musical motifs (Acapella lead in to the final chorus? Check. Repeat final chorus but add key change? Check. Rhythmic repetition of “Oh Oh Oh”? Check.) Vocally, the complex rhythms and ever-changing range of this song make it one of the more difficult tracks on the album to perform, but the members do an excellent job with the challenging material. “Golden Touch” sets a high bar for the rest of the album, albeit one far from the soft romantic stylings of Syndrome’s cover.

The only true ballad of Syndrome, “Close Your Eyes”, shows off the members’ vocal skills individually with minimal instrumental interruption. While it starts with a quiet lounge piano, it slowly builds to a big group chorus. In addition to some lovely work by rapper Noeul, who reaches outside of her comfort zone, what really rescues this song is the soaring vocals in the middle eights. Telling the story of a boy so enticing he’s almost like a dream, it’s by far the best love song on this Valentine’s Day album.

The lead single from Syndrome opens with notes from an electronic strings section, and though the instrumentation diversifies as the song continues, the orchestral undertones lend an original, romantic quality to an otherwise nondescript tune. With “Tell me Tell me,” Rainbow are staking their claim as a headlining K-pop group by referencing a…minor hit from 2007. In addition to numerous K-pop influences, it draws inspiration from the sing-talking of recent British pop starlets like Jessie J and Cher Lloyd. Vocally, I thought Hyunyoung and Seungah were standouts, though Woori’s “Shh…anyway” too lead in to the chorus was also a big hit for me.

Beyond those moments, the song is bland and inoffensive. It’s hard to actively dislike the song, but it lacks the epic quality of “A” or “Mach”. Of the 6 tracks on the album, it stands out as the most chart-friendly, but it fails to highlight any of the signature attitude fans associate with Rainbow. Ultimately, it seems more suited stylistically to DSP Media label-mates KARA or Puretty. While it is disheartening to see Rainbow with a bland song after so many months away, the members are skilled at live performances and will certainly excel with “Tell me Tell me” during their comeback stages.

Space-themed disco songs have sounded the same for 35 years, and with “Cosmic Girl” Rainbow aren’t really interested in changing the formula. The track opens by sampling newsreels, and includes random space terms like ‘Milky Way’ and ‘starlight’. It’s also sustained by electro-synth runs and double hand-claps. However, the song simultaneously manages to sustain the dance energy beat and show dynamism in tempo and key, which means it still sounds fresh to me after more than a dozen listens. It’s arguably both the strongest track on Syndrome and the biggest stylistic departure from the rest of the album.

You could easily argue that the world doesn’t need another addition in this highly-specific genre, but “Cosmic Girl” is a pleasant-enough dance hit that rounds out the album’s instrumental experimentation with bass, horns and synth.

5. “The Story Only I Know You Will Never Know”

The title is by far the most unique thing about this mid-tempo song. The pre-chorus has some strong vocal performances, but overall the song lacks anything that merits a second listen. I think I would have liked it better as a more traditional ballad, as the instrumentals really overpowered the lyrics during the verses. As it stands, it could easily be the theme for a 1980’s American family sitcom, but I’m not sure I’d watch it.

The producers must have reached the last track of Syndrome and realized the album was light on both saccharine sweetness and key changes. “In Love” lays both themes on thick, but still manage to keep it a strong album ender. The chorus is my favorite part as it sounds like something plucked from a mid-1980s chick flick. It’s easily the most KARA-influenced track on the album, sounding at times like “Jet Coaster Love,” “Go Go Summer” and “Winter Magic.” It doesn’t have the lasting power of the more dynamic “Golden Touch”, but it still evokes the naive sweetness of a wholesome Valentine’s Day picnic at sundown.

Perhaps saying the instrumentals are the strongest part of a K-pop album is a backhanded compliment. In this case, however, I think the ambitious composers behind Syndrome really deserve special mention. With the exception of “The Story Only I Know You Will Never Know,” the complex instrumentation gives the album a rich texture that sets it apart from similar albums by other groups. While there are some weaker tracks, the overall album creates a cute, cohesive whole that will appeal to new and old fans alike.

While the preview photos and the title-card album cover evoke the soft romanticism of old movies, the album itself channels years from 1975-1985, where the horn section was big, the hair was bigger and the phrase “less is more” had absolutely no meaning. The end result won’t be to everyone’s taste, but Syndrome really doesn’t care as long as it gets people dancing.