Get Your Character On!

Whip out your pens, tablet styluses, and Photoshop because Infinite’s having a “Character Contest”! 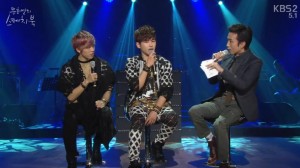 This contest is pretty interesting on three levels. First, outside of Jonghyun’s hilarious Photoshop Minho contest on Twitter, K-pop contests never focus on fanart. Most K-pop fan competitions involve vocal covers or dance covers, so it’s pretty cool to see Woollim use a completely different medium to engage with the fans. Since fanart is pretty much a staple in a lot of fandoms, this contest is a great way to recognize and gauge the talents of a large part of the K-pop fanbase that has previously been pretty unrecognized by the industry.

Second, the prizes are pretty hefty. Judging from the video, they’re not looking for super complex and ornate pieces of art (like 3D structures, huge paintings, etc.). And though it’s not enough to fund a trip to Korea, 300,000-1,000,000 won is still a lot of money for a drawing – much higher than just sending someone signed merch. Same goes for those Nexus 7 Tablets. Considering I’ve seen various more official art contests that don’t even give out half that amount for prizes, it’s kind of surprising to see that much prize money for fanart (especially if Woollim is thinking along the lines of cute chibi drawings like in the video). There will definitely be some great entries in this contest, but regardless, 1000,000 won (a.k.a $900) is a lot for boyband drawings.

And third, the rules are pretty interesting:

Directions
1) Intellectual property, design and ownership of selected characters will be transfered to Woollim Entertainment, and all submissions are final.
2) Should there be a doubt as to the originality of the submissions, Woollim entertainment has the right to disqualify the applicant. Any legal issues due to such submission will be handled by the applicant.
3) Depending on the selection pool, there may be no winners. All expenses and tax incurred will be paid for for by the applicant.
4) All works must be original and should not have been submitted to any other competition. Should the submitted work be copied, submitted to other competitions in the past, the winner will be disqualified
5) Winning characters, and finalists’ characters may be commercialized by Woollim Entertainment to be produced and sold.
6) Winners will be asked to submit a raw file format for editing
7) Applicants agree that the winning works, to be used in various products could be altered and edited for the purpose of commercialization.

So basically, Woollim gets all the intellectual property/design/ownership of your artwork and can commercialize your art for their own products (like merchandise and stuff). But you probably won’t get any of the money they might make from your drawing, just the prize money offered in the contest. Which makes me wonder: Woollim, are you just trying to use your fans as a way to get new designs for cheap instead of hiring professional artists/graphic designers and possibly paying royalties? If so, that’s cool, but you might as well just say, “Help design our future products!” versus “Draw cute characters (that we might make money off of)!” Fans will apply regardless, and the contest will sound a little less shady. 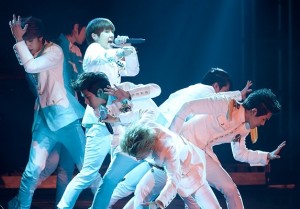 Speaking of shady, number 3 on the rules list sounds pretty questionable – I’ve never heard of a K-pop fan contest that had no winners or even raised the possibility of having no winners. Like all contests, this is going to get a lot of submissions of different quality, and some will definitely shine above the rest. With all that money and physical prizes ready to give away, I don’t understand how “there may be no winners”. What is Woollim going to do? Declare that everyone’s work sucks and just hoard all the prizes? And what the heck are these “expenses and tax incurred” that the applicant is paying for? As far as I am aware, entering the contest is free. All in all, there are some loose ends here that make me a little dubious of Woollim’s intentions.

But no matter what Woollim’s reasoning behind it, a drawing contest sounds like a lot of fun, and I’m all for K-pop labels recognizing how talented the fans are in various fields outside of just singing and dancing. So all you artsy Infinite fans, whip out your drawing utensils and  go unleash your inner Picasso! Except maybe Picasso isn’t the best example, considering Woollim might want to be able to actually recognize the members of Infinite. Anyway in the words of the Hunger Games, Happy Character Contest, and may the odds be ever in your favor!