Super Junior-M, the Good Kind of Break Down 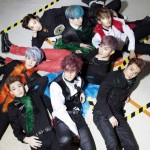 First things first: welcome back Zhou-Mi and Henry; we missed you! After a long wait, Super Junior-M is back with their second album “Break Down,” released on January 7th. The first track they are promoting off of the album is the title track, “Break Down,” a song that is slow to start but that builds into a powerful electro dance track with dubstep undertones. The song falls somewhere between the upbeat rhythm of “Super Girl” and the hard-hitting electronic sound of “Perfection.” As for the MV, SM Entertainment and their random rooms strike again. For the sake of this review, let’s just pretend that this isn’t an issue we have talked about a hundred times, instead let’s focus on what SM does well; namely, wardrobe, dance, and overall feel.

If you are familiar with the MV for Super Junior-M’s track “Perfection” you will be feeling a strange sense of deja vu as you look at Siwon’s furry hat. They have continued with the fur theme from their previous single, incorporating it not only in hats but also as jacket accents and shoulder pads. It is a little more subtle in this MV (if subtle is a word we can use for fur fashion) and it fits the overall stylistic choices for the MV better than a lot of random fluffy hats. Carrying over stylistic choices is common for groups, see SHINee’s pastel pants or f(x)’s insane accessories. Unfortunately, it seems that Super Junior-M is going to make fur their calling card. 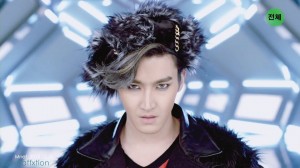 Another stylistic choice made for this video was the use of colored hair highlights and colored contacts. The contacts are most noticeable with Siwon, partly because he spends the entire video staring into the camera like he is trying to stare into your soul. The creepy and never-ending stare aside, the combination of the contacts, his wardrobe, and the stare made him look strangely alluring, like a creature out of a fantasy book (possibly an incubus) which is likely what the stylist was going for. Circle lenses have always been popular in Asia, but this is the first time I have seen an MV put such an obvious emphasis on showing off the fact that a male member is wearing contacts( with Boyfriend’s “Janus” coming in a close second).

Instead of dying all the member’s hair crazy colors, they went for mostly natural colors with dyed highlights (except for Eunhyuk; with him they took the crazy all the way). With all the talk about the damaging effects of hair dye here on Seoulbeats it is a relief to see a group not going for the full on cotton-candy hair, as exciting as that look can be. The more natural, — with slight enhancements — look suits Super Junior-M, and since most of the color was focused in their bangs it worked as a nice accent to their faces, as opposed to the hair being the main focus and taking away from the face (as can happen with someone like G-Dragon). 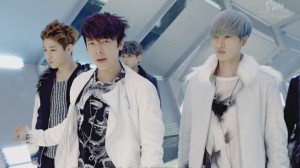 Overall, the stylistic choices flowed well together, with each set of outfits fitting into a monochromatic color scheme that works well with Super Junior-M’s darker image. The fashion in the industrial room was reminiscent of outfits in J-pop from the mid-2000s, specifically Kat-tun. These outfits were edgy and masculine but not over the top in either respect and there were a lot of interesting key fashion points to look at in the whole MV: Eunhyuk’s heart shoulder chains, Henry’s green sparkle sneakers and black lace butt-skirt, and Sungmin’s gold-bedazzled turtleneck, for example.

Moving on to the dancing. It was good, as expected from the best dance members in Super Junior, but it wasn’t overly exciting. This may be the biggest complaint about this MV so far, the dancing simply wasn’t interesting enough to make up for the boring nature of the MV sets. There were some very impressive moments in the choreography such as the turn-kick in the beginning of the video and Zhou Mi sliding through the members to the front for his solo. There was also a dance break about three-fourths of the way through the MV that featured my personal favorite dance move, the body wave up from the floor. That entire segment of dancing, the floor moves and the two parts of the group doing different choreography, was the most interesting the dancing got in the MV, which is just too bad considering the skill and potential those particular idols have. 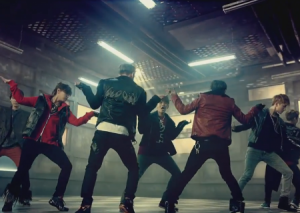 As a unit, Super Junior-M dances well together; they’re very in sync and polished, but they have slightly different personal styles so the dancing is more interesting to watch if you spend time focusing on specific members as well as the group. We all know Eunhyuk is known for his dance skills, but in this MV Henry was the one that really shone for me. His dance style arguably has less precision than other dancers in K-pop but all of his movements have an attitude and emotion to them that make him the most interesting to watch.

As for the sets, they all complimented the wardrobe and stylistic choices made for the members, or vice versa. The white room with light panels reflected well off the furry white clothing, the industrial room worked with the red and black edgy theme, and the foggy room worked with the subtly black and grey outfits. At least if random rooms are being used as a background it is nice to be able to say that the rooms fit in the video as opposed to being contrasting or visually overwhelming. One complaint, though: what was with that weird stuff flying in the air in that one scene? Petals? Confetti? Feathers? Not sure, but the MV could have done without it. 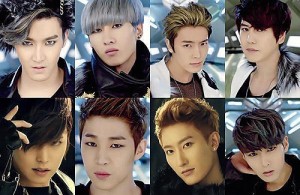 Overall, this was a strong comeback for Super Junior-M after a long break. They still work well together as a unit and their songs and singing are still top quality. Sadly, SM is resistant to breaking out of the box (bad joke, sorry), and stuck with their old standby of rooms with lights, but since “Super Girl” had such a fun MV there is still hope for Super Junior-M in the future. I can’t in good conscience give this any higher rating than 3.5/5 due to its generic sets, but overall the feel of the video flowed well and the stylistic concepts worked together (and the outfits were awesome) so it still gets a good score.

What do you think of “Break Down,” readers? Is it the Super Junior-M comeback you were dreaming of?