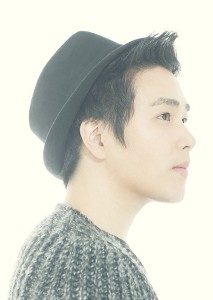 d.ear (Lee Hyung-seok) is one of the early rookies of the year, dropping a full length album with all tracks written, composed, and produced by d.ear himself. He comes from RealCollabo, the same company that houses Ra.D, BrotherSu, Joo-young, and Siaena. The stage name d.ear has two parts: ‘d’ is shape of a musical note, more obviously noticed when looking at the header on his Twitter page, while ‘ear’ refers to the ears of the listener and what accepts the music. The debut album is titled Love Graphy with the title track being “Time Goes By.” Prior to debut, the track “December 24” was released, following the pre-release trend of these days. The album intends to provide a full spectrum of feelings experienced through love.

The “Intro” keeps the focus on the instrumentals as d.ear sings the same line a couple of times. The instrumental is more than enough to keep attention with its jazzy feel and unexpected shakes here and there. It’s a short intro, clocking in at fifty seconds.

“Love U” takes a different path from the intro, using piano to accompany the vocals, the steady beat of the percussion instrument adding variation in the verses and smoothing out to match the vocals during the chorus. The song really starts the album off strong with the emotional refrains and striking vocal ability. It isn’t until about a minute until the end that strings are added for another dimension to the song. Though the strings helped add a halo, so to speak, to the vocals, they seemed overall unnecessary, drawing attention away from the lovely vocals and piano to the misplaced strings.

The piano continues with “Draw You” (below) but morphs into a distinct R&B beat with better incorporation of the strings. d.ear’s voice remains low and soft, much like in the previous two tracks, but there’s still a distinct level of expression. The continuous light drums in the background are faint but help keep the song on track. The song has a very fulfilling nature with its swells in sound and easy hook.

“Though” brings back that guitar we glimpsed in the intro. Here the acoustic guitar is the quieter accompaniment, different from the piano in the previous songs. The song is very soothing, like the previous ones. It has an appealing use of back vocals and different uses of the voice. d.ear also keeps pulling out the stops, with the vocal technique used differing from what has already been heard in the album.

The R&B returns with “No Matter What I Do.” A song with uplifting sounds, the overall impression is that of a throwback to earlier years due to the sounds used and the slow grind of the instrumental. The use of electric guitar is particularly welcome and effective, also giving the song a unique color from the previous ones. The movement of the song is to a slow beat, though it feels much faster than that because of way the beat is firmly felt throughout the song.

“We Need to Talk,” featuring BrotherSu, has an instrumental that isn’t heavier, but feels fuller than that of previous songs. Acoustic guitar and steady bass create a pleasing harmony with snippets of string and piano. Labelmate BrotherSu’s higher and clearer tones stand out in some conversational moments, adding variation that doesn’t disrupt the piece but simultaneously doesn’t necessarily fill any holes in it, either.

“You Make Me Feel Good” provides guitar with a heavy beat, and what sound to be hand drums lend a fun touch. With its faster tempo, the song is still gentle and sweet, but with the kind of lazy enjoyment that is often attributed to indie songs. There’s also a bit of a reggae feel used to aid the light-hearted nature of the song in transferring the good feelings discussed to the listener.

The title track, “Time Goes By,” uses the same sounds of the rest of the album–the jazzy piano notes, the acoustic guitar, layering of voices–to create a song that pushes the vocals to the forefront the most out of all the songs of the album. The nature of d.ear’s voice makes it sound like he’s whispering for most of the song, creating a very intimate feeling. A minute from the end, we hit a fast build-up that breaks with enough drama to launch the climax of the song without breaking from the its style. For the most part, the strings are what give the song that heightened sense of drama and emotion, of course, aside from the vocals themselves.

“December 24” appropriately holds hints of the previous holiday season while providing a good preview of the album, as this is the track released in December 2012. The track is full of the warmth of the holidays with its slower beat and sweet lyrics.

The album comes to an end with “Good Night.” The song returns to a quieter time with less heavy instrumentals. The title of the song is also suitable for the song’s position in the album. The light drum action in the background is akin to preparation for the end, a drum roll that begins after the first chorus to guide the song and album to rest. It’s present throughout the song with little variation and is light enough to not disrupt the soft nature of the song.

Love Graphy is a strong debut from d.ear. It has a wonderful amount of cohesion throughout the album with the clean instrumentals, ever consistent vocals from d.ear, and common theme of moments in love. In addition, as a debut album, there’s effort made for each song to showcase new vocal abilities, styles, or incorporation of the instruments. As a whole, it’s just very melodious with every track worth a listen as they flow into one another. Sometimes the main track of an album has a distinct mainstream tone to it, for obvious reasons. But here, “Time Goes By” fits right into Love Graphy, suiting the flow, without any extra effort to add something to the album that it simply doesn’t need. None of the tracks seem to act as fillers either, which is exceptionally pleasant for a ten-track album. Any complaints I have are nitpicking and based on personal preference, already mentioned per track above. I’ll definitely be looking forward to whatever d.ear has to present next.

Readers, how did Love Graphy strike you? What’s your impression of the album? Leave a comment with your thoughts!