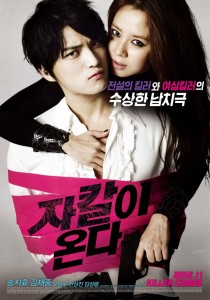 It’s been about two months since the release of Kim Jaejoong’s latest cinematic venture, Codename: Jackal. But given that his first solo mini-album complete with vampire-themed MV just dropped, now seems as good a time as ever to give Codename: Jackal (a.k.a Jackal is Coming) a once over.

The eponymous Jackal is an unscrupulous hitman and the scourge of the Seoul district police. So when a handwritten note is delivered to them detailing the time, date and location of his last hit before retirement, naturally they jump at the opportunity to nab him. But who is the latest target of this super assassin?

Enter Choi Hyun (Kim Jaejoong), an idol with an attitude problem. Idols get a very poor rap in the ROK’s film and television – always abusing their subordinates and making trouble for their managers. I guess roles like these are designed to counter the nation’s idol obsession and lighten the load for idol actors who only need to act superior to deliver a convincing performance. Nevertheless it’s lazy writing. Codename: Jackal relies on this stereotype and others like it to deliver its various plot twists and while these revelations keep the audience engaged, they occasionally come across as purposeless fillers.

The story gets underway when Choi Hyun storms out on his manager after being ambushed by a sasaeng (Ju Min-ha) in his car, going to ground in a rural hotel staffed by a meddlesome bellboy (the adorable Seo Dong-won) who provides much of the film’s comedy. As per the note’s instructions, a 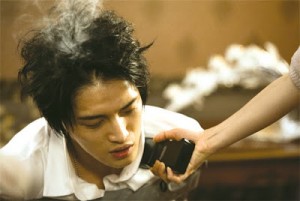 police taskforce sets up headquarters at the same hotel in order to monitor and hopefully prevent Jackal’s next hit. The taskforce has its own problems as uptight Team Leader Shin (Han Sang-jin) and Chief Detective Ma (the prolific Oh Dal-su) clash over the latter’s lackadaisical approach to policing.

Meanwhile, Choi Hyun has been taken hostage by an amateur assassin, played by Song Ji-hyo of Running Man fame. The remainder of the film follows Choi Hyun’s desperate attempts to escape his various captors and the police’s bungled investigation (one of the highlights being the officers going undercover as cleaning ladies).

All the while the audience ponders Jackal’s true identity and how Choi Hyun came to be their target. In the course of the film Jaejoong is variously shirtless, wet, tied up, whipped and gagged. While risqué, it’s all in good fun and was clearly one of the film’s main selling points. The violence however, is a little disconcerting for all its comedic intentions. I’m a seasoned j-splatter fan, but watching Jaejoong being beaten with a wine bottle a 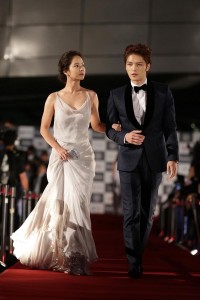 nd forced to urinate in front of his captor came as a challenge seeing how run-of-the-mill the action had been until that point. While Codename: Jackal does suffer from some identity issues – wavering between action comedy and softcore horror – when it finds the right balance it is genuinely compelling.

At its best Codename: Jackal is a comedy of close calls and misunderstandings. The twists are well delivered and the character development rewarding. Jaejoong’s unearthly beauty and willingness to poke fun at himself make him a pleasure to watch on screen and Song Ji-hyo plays her role(s) convincingly. Both Jaejoong and Ji-hyo hail from C-JeS Entertainment so Jaejoong was an obvious choice when 2AM’s Seulong pulled out of the project, especially given his extensive experience with actual sasaeng fans and their gross invasions of privacy. Overall the film is a fun watch and gets a 2.5/5 from me.