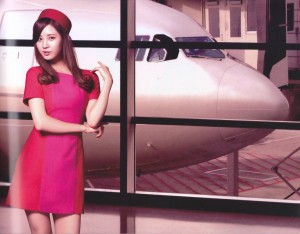 As far as career moves go, SNSD choosing to forgo a Korean album release — which would guarantee chart show wins, year end accolades, and the obligatory high sales numbers — for a second shot at the Japanese market, would rank as an odd one. In spite of this, and in terms of musical quality and future career prospects, I’m liking the whole thing.

In some ways, SM Entertainment should be taking notes on how future pop albums, for any established group in their company, should be executed for music-loving fans. Not to get too far ahead of myself, there are some (admittedly minor) flaws with the release. I don’t really care for the stewardess themed album cover and I do have issues with their average Japanese (though to be honest, most other Korean groups in Japan struggle with diction, hence the garbled lyrics). Also, I dislike the insistence of having that one remake on the album, a forced placement that seems to clash with the overall intent of the album.

In brief, considering where we’re all at in the K-pop year, this second Japanese album is a rare thing from SNSD. It’s a musical release, and a worthy one at that. Here are a few reasons why:

Most SM album releases in Korea tend to operate around one strategy. Fine tune the promotional single, put in one or two songs that fans will hopefully like, and fill out the rest of the album with half-developed tunes made quickly for the album release. Great for getting releases out on time, less useful for musical development and consistent airplay.

With this second Japanese album though, the approach has been very different. While there are tracks that vary in musical styles and sound, at the end of the day they are held together by one theme: good and fun music expected of a girl group.

In some ways, this also has an added benefit, enhancing the promotional singles. While I was cool on Paparazzi (decent if slightly generic) and Flower Power (messy and disjointed in places) for single releases, they work better on the album for how they flow together with the other ear-friendly compositions.

This contrasts with SNSD’s last Korean release, The Boys, where the album jarred uncomfortably from the minimal sounds of the lead single, to the other generic bubble-gum pop material. 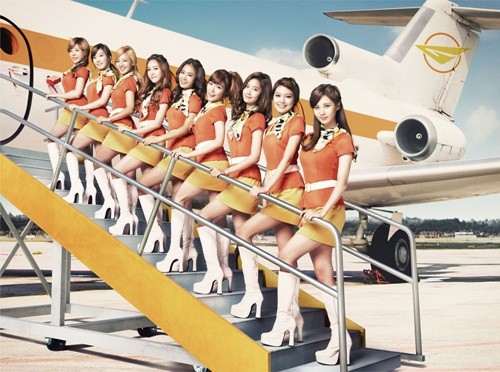 Interestingly, despite how every song fits into the concept of pop music, the album still maintains a pleasant albeit split personality, where there are songs that appeal to different listeners.

Interested in sophisticated pop tunes that can stand comparison with the dance friendly tunes coming out of the radio? Then “I’m a Diamond” and “Reflection” make for good choices. If on the other hand you prefer your tunes with a dopple of cheeriness, stronger bubble-gum pop flavours and simple puppy love themes, then “Boomerang” or “Girls & Peace” would be more up your alley.

It is one thing for an album to have a very unified theme, where every song fits into the album nicely. It is another for the album to have songs that reflect an individual nature and work on their own. That these two come together to give the album differing personalities and musical styles, actually makes the songs eminently listenable and fitting for most pop music preferences.

The song production is a cut above their Korean releases.

While The Boys as an album did have its moments, there were many times where sloppily done production, or ideas that were just not well executed simply undermined the album as a whole. On the other hand, this Japanese album has been exemplary of how simple, refined ideas, can work out well.

Two songs that reflect this principle are “T.O.P” and “All My Love is for You”. In many ways, “T.O.P” is what “The Boys” should have been. Both are tunes structured around hard punching, albeit minimal beats, complete with instances where there is little singing.

But where “The Boys” tried to take the minimal concept too far, making the song too sparse and forcing the girls to try to sound tough, “T.O.P” pads out the sound with rhythms, such that the song adds to the girls’ vocal punch. The production team also deserves brownie points for not turning the chorus’s chant into a rap; just performing it as it is, a chant.

As for “All My Love is for You”, it basically is what SNSD have been known for, the mid-tempo ballads, but SM tends to stumble with them by overdoing the sappy parts, or just trying to make singing way too high pitched. With this tune, the melody is just slightly dulled, but impressive where the piano and drums make for lovely accompaniments. This balance gives the song enough musical layers to keep it interesting, yet gentle enough to make listening a pleasantly relaxed affair. Add to that vocal demands that completely suit the girls’ ranges, and this is a song that rewards close listening.

It still has what makes SNSD, SNSD.

For all the great makings of this album, there is and will always be the fear, especially among fans, that all these arrangements and fine-tuning will work towards defeating the purpose of the SNSD brand and persona. No matter the sophistication, the effort would almost be for naught if the finished product came out to be something that could be easily emulated by any of the 87463539 girl groups out there.

Hence, this brings the review to the point that is especially pleasing — musical polish. From the album’s ear-friendly bubble-gum pop, to the up-beat dance tunes that hint at controlled evolution, the tunes perfectly portray the SNSD identity as it currently stands. I’d even go as far as to say that the girls’ mindsets and maturity are aptly reflected in tracks like “Boomerang” (where the song touches on a shy love interest) and “Reflection” (where wholesome desire is depicted in a semi-mature manner).

If there was a song off the album that best screamed SNSD though, it would be “Stay Girls”, which literally takes the “girl-to-woman transition” and turns it into a song. With lyrics like “Gonna be, gonna be, to become/A wonderful adult” and “Because we haven’t lost/The feelings to dream,/Stay girls forever”, it epitomises what SNSD and this album represent.

While it’s unlikely that this offering will garner any Seoulbeats awards, largely for how it’s geared toward the Japanese market, it still makes for a worthy listen. Newer fans of the genre may want to look into this for a feel of how musical development and identity can co-exist, as well as how through really clever production and song choice, group flaws can be covered up nicely, allowing individual strengths to be spotlighted. And for all that, it’s worth giving up a Korean release, as well as all the awards (and fan chest-beating) that an utterly different one would bring.