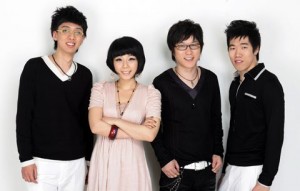 This week’s K-pop Indie Gem is none other than rock band Rumble Fish. If you’ve kept up with the year’s soloists, you may have come across one that has gone by the name of Rumble Fish, with the release, “Don’t Be Like That.” That was none other than guitarist and singer of the disbanded band (as of 2010), Choi Jin-yi, who’s taken to adopting the band’s name. Taking on the name and what residual image that’s been left of the group, she continues to make music as a solo artist. She first flew solo with a mini-album, I Am Me, in the same year that Rumble Fish’s members went their separate ways.

Rumble Fish was a quartet and with Choi Jin-yi were her group members Kim Sung-geun (guitar), Kim Ho-il (bass), and Park Chun-hwee (drums). The band debuted in 2004 with the album Swing Attack. For the approximately six years that they were active, they consistently released music that roamed from indie to pop rock. They built on a mellow repertoire that made for enjoyable listens, but Rumble Fish stood out particularly in their musical diversity. Tricky to pinpoint, there have been traces of Latin sounds, movements towards harder rock, and returns to more acoustic music, in their discography, with the accompaniment of Choi Jin-yi’s appropriately expressive voice.

Swing Attack is arguably one of their most unique and best albums, demonstrating an impressionable debut. The first track, “Weeping Witch,” (shown above) is exemplary of that. A successful haunting effect is created through the use of strings in conjunction with the strong electric guitar melody. The vocals start off quiet and build to incorporate growls and intensity, giving the song a place to go.

Also off of Swing Attack is “I Want to Fall Asleep.” This one plays with more jazzy themes and strong vocals to give significant impact. The midway guitar break quiets the song down sufficiently to allow for another buildup to the high point. The ending brings an unconventional long note that almost sounds haunting as the song winds down.

My last choice off of Swing Attack is “Close Your Eyes.” It brings the funk on with powerful vocals. From start to finish, there’s distinct strength throughout. The sound is in direct contrast with some of the other tracks on the album, which is part of what makes that debut album so fun to listen to.

In 2005, the band released their second album, Have a Nice Dream. Like their first, the album continues to bring some diversity with expressive vocals. “내겐 전부였는걸,” which if I hazard a translation would stand for “You’re My Everything”, is one of those tracks. The pop rock ballad effectively uses Choi Jin-yi’s rather impressive range to deliver the melancholy song.

Off of 2007’s Open the Safe is “To Love.” This album, the band’s third, displays a noticeable quietness in comparison to previous albums. It’s a drift towards more mainstream sounds, which the group pulls off well, but there’s less of a distinct character throughout the album than there had been in previous ones. “To Love” is, nevertheless, a catchy tune with softer vocals and a persistent melody. The use of a simple syllable “na”, sung in the melody of the song in the last minute, helps take some of the attention off of the vocals and onto the instrumental.

Last up is “Encore (Unplugged)” from Rumble Fish’s fourth and last full-length album together as a band, One Sweet Day, released in 2009. The softer drums with the vocals and acoustic guitar make a sweeter piece that looks to be occasionally overpowered by the vocals, but still good to listen to.

Rumble Fish’s diversity in music is a pleasure, and it’s a pity that the band disbanded. Have you listened to any of their albums, and do you have any favorites? Are you interested in following lead singer Choi Jin-yi’s work as a solo artist? Let us know in the comments below!