A Korean Depiction of a Multicultural Family: Papa 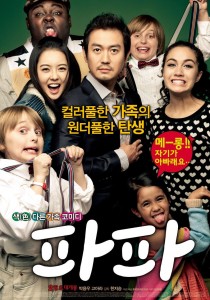 I’m not normally one to watch Korean movies or television, but when I found out that a movie had been made about a multicultural family, I knew I had to see it. South Korea is a homogeneous county with little albeit increasing diversity, and often comes under fire for insensitivity towards other cultures. Currently, the country is facing issues with the clash between its growing amount of multiculturalism in juxtaposition with underlying xenophobia.

Bearing these things in mind, I just had to know how a Korean film would depict a multicultural American family. I worried over potentially finding offensive stereotypes and obnoxious amounts of nationalism, but instead what I saw was a cute family film on the importance of family.

Written and directed by Han Ji-seung of Venus and Mars and Alone in Love fame, Papa tells the story of a down-on-his-luck talent manager Choon-seob, played by popular actor Park Yong-woo. After having followed his client to the United States, Choon-seob is horrified to discover that his would-be star is knocked up and unable to pursue her career as a star. Fearing having to return to Korea and face his boss, Choon-seob quickly marries a Korean-American woman so to prolong his stay in the United States. Not long later, his wife dies in an unfortunate car accident, leaving him the father of a family of six.

Oldest sister June, played by the lovely Go Ara, manages the family while her mother pursued her own dreams. June quickly makes it clear to Choon-seob that his only purpose is to keep the family together, as without a legal guardian, the children would be relocated to different homes. Aside from Joon is Rosie (Angela Azar), Maya (Meg Kelley), Gordon (Michael Anthony McMillon), and the troublesome twins, Tommy and Jimmy (Peyton and Parker Townsend). Determined to stay together, the odd family welcomes Choon-seob into their home, which ultimately changes their lives.

The entire film is a very cutesy, cheesy, feel-good sort of thing you’d find in family films. The message is straight-forward and simple, underlying the importance of family and sacrifice. The film itself was very cliched and predictable, following a formula that could be interpreted from the very beginning. 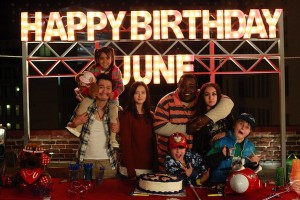 The characters are basic and largely one-dimensional, however the main character, Choon-seob, does go through some character development as the film progresses. Initially, he is self-centered and rude and cares nothing at all for the family but later comes to love them. The acting varied — although Park Yong-soo and Go Ara both did well in their roles, the supporting cast was considerably less skilled. It was quite obvious that they were amateurs or even random people picked up off the street, as they showed no sincerity in their acting.

The dialogue was awkward and their acting was shallow and contrived. Even the children, especially the twins, had poor acting. Not only that, but the twin’s “rapping” was absolutely deplorable. I found myself skipping ahead whenever they began a rap sequence, awkwardly ending many of their sentences with “Yo.” By contrast, I found that Go Ara did a surprisingly good job. I say “surprisingly” because I haven’t heard very many good things about SM’s young actress, but here she managed to embody her role as the serious but determined June very well. True, June lacked complexity as a character and was a rather easy role to fill, but at least Go Ara was believable.

Although the film was genuinely simple with an uncomplicated plot, it was rather refreshing all the same. It found a nice ground between a comedy and a feel-good family film while also working in some interesting cultural differences. In the beginning, Choon-seob would go into loud rants or audibly share his thoughts and emotional turmoil, such as you would find in Korean dramas or movies, while the American cast would watch in silence and wonder what he was doing.

In the end, if you like happy, feel-good family films, I would recommend that you watch Papa. However, for its lack of depth, mostly poor acting, and uninteresting plot, I’m giving Papa a 2/5. 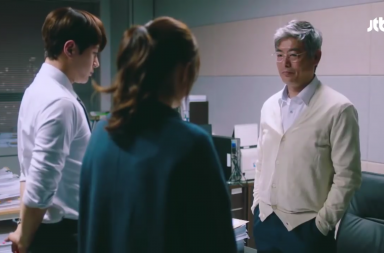