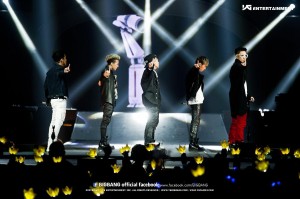 The beginning of November was filled with both joy and sadness as K-pop fans on the West Coast celebrated with Big Bang and their first solo concerts in the US, while East Coast fans suffered with the aftermath of Super Storm Sandy.  Our prayers go out to all those affected by the storm, stay strong and safe and we hope that things get better soon.

The following are the 5 Things that happened in K-pop last week that I think were a bit better than the rest.  Be warned, spoilers lie ahead so if you’re not up-to-date on your K-pop, turn back now.

5. Show Me the Merch 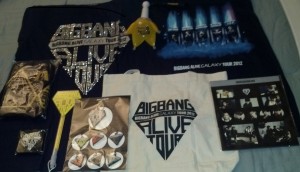 One of the complaints I had previously about some of the K-pop concerts that I’ve been to was that the artist/their company didn’t bring any merchandise for fans to buy at the concert.  I like to buy at least a T-shirt or something to commemorate the concert, but many of the shows had no merchandise at all for sale at the company.  I can see how it would be hard to do at a concert like the Korean Music Festival, but at a solo concert?

You don’t know how disappointing it was to find out that neither F.T.  Island or C.N. Blue brought any merchandise to sell, not even a t-shirt, to their concerts. But as you can see in the above picture, that wasn’t a problem last weekend.

4. A Younique Move from SME

In an interesting move on the part of K-pop giant SM Entertainment, they created a sub-unit of Super Junior‘s Eunhyuk, SNSD‘s Hyoyeon, SHINee‘s Taemin, Henry from Super Junior M, Exo-K‘s Kai and Luhan of Exo-M in collaboration with Hyundai Motor Company to release PYL Younique Album.  I really liked the song, but it in no way made me want to buy a Hyundai.

When I first heard about the K-drama Faith starring Lee Min-ho and Kim Hee-seon it had “hit” written all over it. Although Faith did okay in the ratings, it did not reach the “hit” status that everyone expected.  It was at times great and Lee Min-ho and Kim Hee-seon were able to get fans to care about them, but the story and direction was really lacking at times.  It really made me understand the “2% short” comments.  However, i still watched the whole drama Faithfully and was glad for the ending we were given.

According to Kim Jong-kook, yes.  The mosquito voiced muscle man and resident bad ass on Running Man makes a comeback after two years with his 7th album, Journey Home.  His Running Man dongsaengs HaHa and Gary feature on one of the album’s songs and former Running Man cast mate Song Joong-ki stars in the MV for the song “Men are All Like That.” 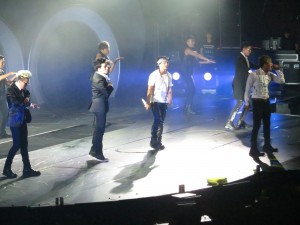 All of my K-pop fan girl’s dreams came true this past weekend as I was able to attend Big Bang’s concerts in Los Angeles, California,  Everything was perfect at the concert except one thing… the banning of cameras at concerts.  I know from watching/reading about past fancams that YG is pretty strict about no cameras or taping, BUT I called the Honda Center on Thursday and the box office said that non-professional cameras would be allowed,  Then when we got to the venue they told us that cameras weren’t allowed.  I bought the camera I had in preparation for the concerts–so where there’s a will, there’s a way.  The security at the Honda Center were very strict the first night, and somewhat the second night–at times too much so.

I will have to say the staff at the Honda were very efficient in moving the fans into the arena in a timely and orderly manner.  The staff manning the merchandise booths were also very fast and efficient and thank goodness they had multiple booths to fulfill the fans’ wants and needs.

As for Big Bang, they were PERFECT!  Joking, they weren’t perfect.  They were definitely times when the vocals weren’t perfect, but in a high energy live performance I don’t expect perfection.  What I do expect is a great performance and Big Bang more than delivered.  They all also practiced speeches in English for fans which was so cute.  From what I could see, fans were also pretty cooperative (well, other than sneaking pics and vids) and were all very excited and appreciative to finally be able to see Big Bang live in concert. Maybe the one complaint I had would be why Big Bang chose to sing “Bad Boy” and “Fantastic Baby” again during the encore?  They have so much songs in their repertoire, so why do repeats?  Not that I really cared, but it might have been nice to hear some of their other songs live. California fans were treated to G-Dragon‘s first performances of “Crayon” on the tour, were able to celebrate T.O.P.’s birthday with him, and it was almost three hours of K-pop fan girl bliss.  Be excited East Coast VIPs, because it was truly, Fantastic, Baby!