Krystal and Victoria Show Their Love for Marie Claire

It isn’t uncommon for multiple members of a group to star in a photo shoot. For Marie Claire’s October 2012 issue, f(x)’s Victoria and Krystal both appear to snuggle and look pretty with matching frizzy hairstyles. Set against a plain, pinkish backdrop, the girls look lovely, if a little pekid. With their large eyes, matching styles, and narrow faces, the girls could pass as sisters. 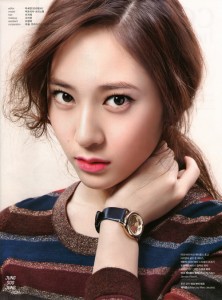 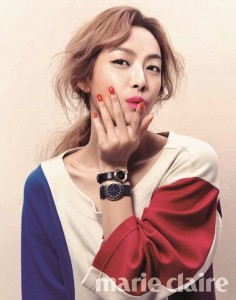 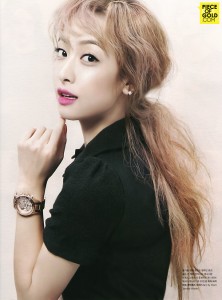 These close-up pictures give us a good look at their makeup and hair styling. Personally, I feel like the angle and shadows make Krystal look a little bug-eyed. Her eyes are the first thing you notice, and they penetrate you with their intense stare. The gentle shadows sloping down her cheeks and carefully applied blush cause the bottom half of her face to appear more narrow. In all the pictures, it’s the shadows around her cheekbones and temples, closing in her face to make it appear smaller, that make her face look a little too thin to me.

Still, Krystal looks very lovely, and the softness of her makeup in this shoot enhances her natural beauty. Likewise for Victoria, who shares the same problem, though not in this picture. In the most flirtatious picture of the shoot, Victoria beckons us with red fingernails and puckered pink lips. In another picture, Victoria looks too-pale with overly highlighted skin, almost blending into the background. Her whispy fringe and frazzled pony reminds me of my hair on days that I don’t style it. 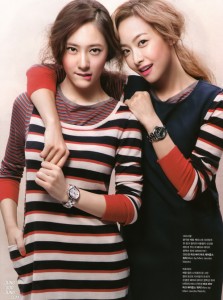 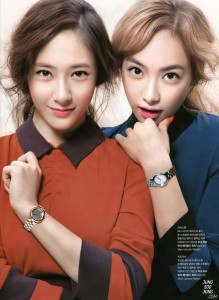 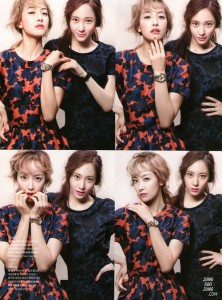 In a picture of sisterly love, Victoria tilts into Krystal, who somewhat returns her affections by raising a hand to Vic’s fist. But that could just be to show off their shiny watches. Victoria’s shirt matches Krystal’s jumper and they both look cute in a simple, unruly, yet put-together way, like purposely unstyled librarians. However, Krystal’s lip bite is more sexy than shy or sweet, whereas Victoria’s all smiles. Victoria is also very adept at changing her appearance, because in every photo, her face looks a little different. In the next, she looks scarily like Krystal, as if they edited Krystal’s face into Victoria’s. But at least Victoria’s showing more personality in her modeling than Krystal. Krystal smiles or smolders at the camera, her face so devoid of emotion that she resembles a doll. Victoria, however, pouts her lips, raises her eyebrows, tilts her chin, and does a different face for every photo to break the monotony. Krystal looks especially still next to her. 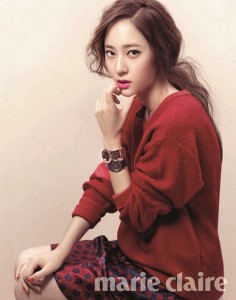 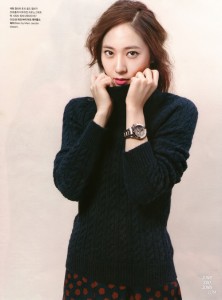 Despite showing weaker skills at modeling, Krystal has two more solo pictures of her own. Krystal, as lovely as she is, doesn’t emote properly in pictures, and although she certainly looks nice, she gives off no feel to her photos. There’s nothing to draw you in. This next photo has her looking nervous and not-nervous. Her straight face betrays no emotion, but her hunched over shoulders, raised finger to her lips, and hand to her knees makes her look perplexed. Her body-language speaks of perplexity but not her facial expression. In the final photo, raises her turtle neck’s collar to cover her chin, wearing the same expression as the previous photo. Her sweater looks cozy, that’s all I have to say.