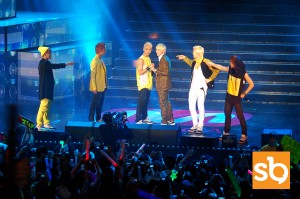 The US’ first K-pop convention, KCON, felt like an earnest attempt at staging a large scale K-pop event that was more than just a concert. Since Hallyu started going “big,” a lot of concerts have taken place in the States, most of them resulting in less than stellar results.

KCON was pretty ambitious for what it was: there were a good number of K-pop related panels and activities that involved quite a few special guests from the industry, before ending with a concert that evening. The venue was packed, the energy level extremely high, and it did feel like there were a range of things to do for everybody.

K-pop isn’t K-pop without the song and the dance, and it was good that fans got panels from choreographers, music and show producers. There was a choreographer panel with some big shot K-pop choreographers such as Aimee Lee Lucas and Rino Nakasone; there was a panel on the making of M! Countdown. There was a good mix between the people who work in K-pop, and the people help give K-pop the push it needs, most notably: the fans. Fan clubs were very present, there was a panel discussing fanclubs, and there were Youtube stars who were sort-of K-pop stars, sort of K-pop fans, a pretty important online demographic that helps propel Hallyu.

As fellow writer Johnelle has already discussed, KCON was way more organized and helpful than almost all of the States-side events we’ve seen, and we’ve seen many complete messes. But that isn’t to say that the entire event was smooth-running. There were enough bumps here and there on the day of the event, and the biggest bump probably came from the fansign events and the organizers totally underestimating the, uh, ferocity of fans when it comes to seeing their idols. The fansigning directions given to fans were unclear, which led to a lot of chaos on the day of, which is just unfortunate for everybody. Fans do what they do for a chance to see idols who they rarely ever get to see, and it caused a lot of issues that could have been prevented by both the organizers and the fans. 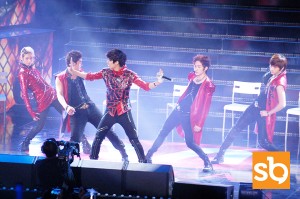 It’s probably worth noting that while KCON could have done better in terms of organizing — and let’s face it, seems like K-pop itself as a whole could do with better organizing — they have been pretty honest with admitting faults, which is better than the explanation-less last-minute cancellations and total system breakdowns we’ve seen from other events.

The concert itself was like most K-pop concerts we’ve seen in the States, though it was pretty notable that Mnet themselves probably told all the groups to attempt as much as possible to communicate with the audience in English. This was pretty hard for almost all the groups without at least one English speaker, and nobody said anything we haven’t already heard, but it’s the effort that counts, right?

It was a good idea to open the concert with BAP, whose swag and musical style was just the kind of concert opener an event like this needed. GNa was up next, and I had hoped she would sing a different track for a concert in the States, seeing as she just released Oui, but no dice. I left the concert with a better impression of Vixx because N reading off a pre-written note in English was probably the most effort any non-English speaking idol made that night. Nu’est‘s songs are insanely catchy and it’s not a lie that their music is probably the music I came away from the concert loving the most. 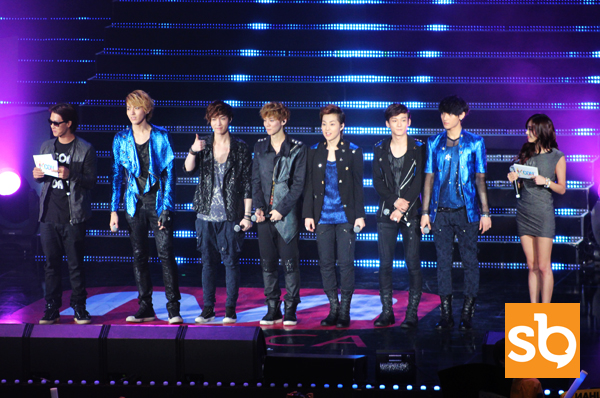 Surprisingly (or not surprisingly), Exo-M was made out to be a major act of the night, performing four songs as opposed to the three that everyone else except for 4Minute got to perform. I guess it helps that there is an English speaker in the group, though the group’s newbie awkwardness was not remedied by having Kris, and the group’s on-stage moments with MCs Danny and GNa felt too long and were somewhat uncomfortable to watch. The crowd loved them, though, and in retrospect, it was probably bad idea to put 4Minute on after Exo-M. Sunbae status aside, 4Minute was not the attraction of the night, and a good portion of the fans made their exits for the night after Exo-M finished, which is unfortunate. The group also performed one member short and the overall audience energy did feel a little lower as they performed.

Danny and GNa were not the most finessed of MCs and their repeated appearances didn’t do much to usher the show along, unlike Paul Kim’s brief but energetic introductions at the beginning of the show. There was a lot of sponsorship and product plugging, but that was negligible overall.

All in all, KCON had mishaps here and there, and it wasn’t a perfect event, but it was admirable for what it was. Hopefully it can continue to be as adventurous in the coming years.