I’d love to say that this week’s music shows were exciting and unmissable viewing for K-pop fans, but it was rather ordinary. Nothing much happened: TVXQ made their sophomore comeback as a duo, Ga-in had her solo comeback, SBS K-pop Star winner Park Ji-min made her debut as one half of JYP‘s new female duo 15&, Mnet M! Countdown was put on hold for the Hallyu Dream Festival 2012 and IU became a redhead. You know, just the usual; what happens every week. The only significant change worth noting was the rather head-spinning and nausea-inducing camera work going during Music Core: MBC, what happened? Were you always like this?

[youtube http://www.youtube.com/watch?v=USC_srxCZPE]Inkigayo is unique among the music shows for having currently promoting idols perform a pre-recorded song aimed at educating the viewer on various matters, such as road safety and eating eggs. This week, though, U-Kiss (minus Eli) performed a song about multiculturalism. Considering the recent events, its timing was quite apt, and though having a more multicultural K-pop group (like one with non-Korean or biracial members) perform the song may have been nice, the choice of the internationally aimed U-Kiss, with its worldwide fan-base, was nonetheless a very fine choice for this song.

[youtube http://www.youtube.com/watch?v=HmbYPiAGZ4I]When Chaos debuted waaaaay back in January, they had managed to catch the eyes and ears of a fair few people, including myself. Their début song “She Is Coming” was different with its bold brass and great vocals, which held under public scrutiny and managed to warm even the coldest of hearts. Since then, though, they seem to have fallen off the radar, so it’s great to see them performing again. “Kiss Kiss” is a more mellow song than their début (I honestly have no idea if they’ve released anything else in between), and the falsetto is a highlight of the vocals, which I am happy to be hearing again. I think it’s high time I reacquainted myself with Chaos.

[youtube http://www.youtube.com/watch?v=kIbgntNpYsQ]Yay for props! Ga-in stands, sits and slides on chairs and a large, sturdy table for the live performances of “Bloom.” While “Tinkerbell” may seem the more seductive performance, the playful and  flirtatious nature of “Bloom” is the hallmark of the performance, bringing a sense of pure joy and wonder to what could have been your usual burlesque display. Ga-in boldly interacts with her male back-up dancers, and even with a million things happening at once, one eye is always trained on Ga-in–it’s impossible to not watch her. 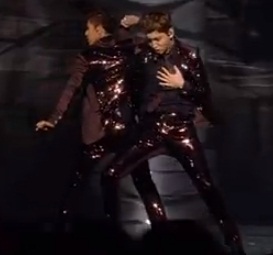 The Kings are back to promote their sixth Korean album (their second as a duo), and they chose the Korean remake of Tone‘s “I Don’t Know” for their comeback performances. following stage outfits for this song in shades of highlighter pink and green *shudder* the stylists have mercifully dressed Yunho and Changmin in black and white for Inkigayo. Coupled with a very Avatar: The Last Airbender-inspired intro, it made for an entertaining comeback stage.

The stage for “Catch Me” was also well done, with a spacious set and better transitioning between the versions with different outfits, which were also good (say what you will about their shimmering cola suits and LED-covered sleeves– I LOVED them). But the stage did end up feeling over-produced for a live performance, and probably needed an epilepsy warning, which is why I chose the following “Catch Me” stage instead:

[youtube http://www.youtube.com/watch?v=Kokex0Ifq5Q]Music Bank‘s stage was much more simple than those of Music Core or Inkigayo: a single outfit and stage, and no fancy transitions or flashing lights. Yes, it was probably more boring than the other stages, but there was one thing of which this performance had an abundance: energy. Perhaps it was because this was the first live performance of the song, perhaps the Cassies had managed to sufficiently rile them up, but Yunho and Changmin gave an massively energetic performance that was so raw. This is what it’s all about, and the conviction that I saw in their execution of this performance is why it’s featured here.

[youtube http://www.youtube.com/watch?v=6962yVz7_Vs]In a lovely echo of their MV, 15& maintained the theme of symmetry for their début stage, from the set, to their actions, to their outfits. There was nothing flashy about the performance, with the only real embellishment appearing in the form of a mini-orchestra revealed from behind a screen towards the end of the song. The singing was superb, but rather than the warmth of Baek Ye-rin‘s voice, or the sweetness of Park Ji-min’s own, I was struck instead by the emotion of the song that these voices expressed–something I have never felt before listening to K-pop. The “I Dream” MV may have ended with the girls standing unnoticed on an empty stage looking out into an empty theatre, but on Inkigayo tonight they held hands in front an appreciative audience, and were watched by many more in South Korea and around the world, including some girl in Australia who has something in her eye. 15& have considerable talent and are also ripe with youthful promise, and I cannot wait to see that promise being fulfilled. As an unabashed fan of spectacle, this performance should have come across as pedestrian to me, and the girls themselves seemed a bit nervous and awkward with their stage manner but for some reason I absolutely love it.