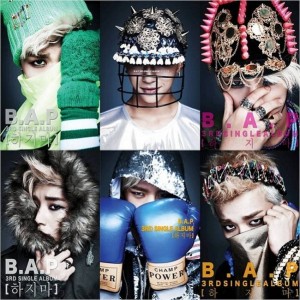 2 single albums. 1 mini album. 1 repackaged album. And now B.A.P brings us their third single album, Stop It, their fifth release this year alone. That brings their song count up to 18 and promotion cycle count up to their sixth. Though the group previously solidified a rather powerful image with promotions for “Warrior,” “Power,” and “No Mercy,” “Crash” and now “Stop It” seem to be taking a lighter approach, which isn’t entirely surprising considering the group’s beliefs and goals. Leader Bang Yong-guk said the following during “Warrior” promotions:

We are currently a white canvas that any picture can be drawn on.

He has also said during a recent Seoulbeats interview,

Our team prides on being passionate challengers. We are not afraid to attempt something new, in fact, we enjoy it…I plan on challenging not only music but other aspects of my musical career to continue discovering something new.

But is the direction that Stop It brings a good one? The single album contains three tracks: “Yes Sir,” “Stop It,” and “Happy Birthday.” The supposed style is a “hipster” one according to TS Entertainment, but as a word that can have different meanings — even more so within the K-pop industry — the concept is still undefined until you take a look at the music produced. So let’s do that.

First up is “Yes Sir,” the intro track.

“Yes Sir” fits into the previously established strong style of the group. It has more of a hip-hop feel than some of the previous title tracks. The background horns and strong beats easily make this a fun song to listen to. I’m not entirely sure about this track feeling “old school” except for placement of some adlibs and sounds, but it all seems to work well together. It’s unfortunate that the track only has four out of the six members rapping or singing in the song, but not entirely surprising. Like B.A.P’s other intro songs, “Burn It Up” and “Fight for Freedom,” this is yet another intro that begs to be extended into a full song as it’s length is barely over a minute.

The lyrics are similar to what we’ve heard before, paving a new path in K-pop and overcoming difficulties, clearly showing that despite the fun that was “Crash,” the old B.A.P is still hanging around.

We don’t have limits, you can’t know the end oh~
Ready to fly, fly
We gettin’ high, high
I’ll rise over you who tried to stop me oh yeah!

Second is the title track, “Stop It.”

The song starts off strong, with a lot of sounds, almost being chaotic, along with Zelo and Yong-guk’s raps. It calms down for the vocalists. If you listen carefully during the chorus, there are faint whistles in the background, and of course, Daehyun‘s vocal progressions here and there. This track flows well from “Yes Sir” and incorporates that “old school” intention better than the previous. The background music is indeed reminiscent of older tracks in the way that it has this sparkly and shiny quality to the sounds. An upbeat track, it seems to fit between “Crash” and their other tracks: not as completely frivolous as the former, but not nearly as powerful as the latter. The risk here is that this track comes very close to sounding generic, as if any other group could have put out this song, though it does seem to fit the personalities the members have, as shown on shows like Mnet‘s Killing Camp and behind the scenes footage for music videos.

The funny thing about the lyrics is that they could be said in either a cute and pleading manner or in an angry and annoyed way, changing the intensity of the words.

Please don’t get mad, stop it, please don’t be like that
It’s annoying, it makes me angry, I love you
How many times do I have to say it for you to understand my heart

I don’t find this to be B.A.P’s strongest track, but it’s still above average in quality.

Last on the single is the obligatory ballad number, “Happy Birthday.”

This is B.A.P’s slowest ballad to date and features the smallest amount of lines Himchan‘s gotten in a song that he has actually been in, even beating his repetition of “wae” with a couple other words in “Goodbye.” The lyrics wish a happy birthday while talking about the positive qualities of the significant other. The song starts out soft and sweet and remains that way for the whole song. It builds up, funny enough, to Himchan’s “Happy Birthday,” and saving the track from being boring. But one aspect that takes away from the song are these water droplet sounds, the type that you can make by flicking puffed out cheeks and opening your mouth. Those detracted from the sweet tune and, in my case, caused laughter. This is a track that probably means most to existing fans, and I wouldn’t call this their strongest ballad, but it’s still more than adequate.

This single album’s most impressive track is “Yes Sir.” The other tracks may have seemed stronger in another context: if B.A.P hadn’t already released better and more unique tracks earlier in the year. The album shows the group’s diversity and that they can take on different concepts successfully, with favorites of their discography obviously determined by personal preference. It’s by no means a poor album, but let’s all hope that the group takes a break and puts out a solid album next year.

Seoulmates, how’d you like B.A.P’s last effort of 2012, Stop It? What’s your favorite and/or least favorite aspect of this release? Leave us a comment with your thoughts!