Are Lost Foreigners a Lost Case in Variety? 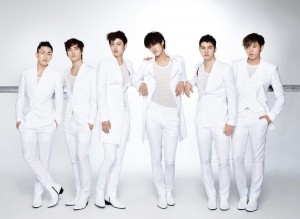 A major trend in K-pop, seen especially in recent years, is the implementation of foreign members in K-pop groups. Foreign group-members play a very unique — and arguably very fundamental — role among their idol peers. They can serve as translators and representatives of a group when they promote in foreign places, and they can also be the median to attract fans back at their home. And for a market as globally-focused as K-pop, these factors alone can be pretty important. Furthermore, while they’re readily able to get attention for their group in their country of descent, even in Korea, foreign idols can have a certain appeal that draws public attention to their group. As we’ve talked about before, these foreign idols can be quite the marketing strategy in K-pop. Non-Korean idols are often painted as exotic and unique as possible by their companies, and some idol groups even flaunt themselves for being multi-cultural. Just off the top of my head, both rookie groups FIESTAR and Cross Gene prided themselves for having foreign members, to the point where these members’ nationalities became one of the groups’ many gimmicks.

However, as much as companies try to brandish these unique foreign qualities, these group members are often virtually the same as their native-Korean counterparts in the highly regimented K-pop industry. Sure, these members may lack the cultural and linguistic understanding that their native-Korean peers are taught at an early age. But when it comes to performing, these weaknesses are often overlooked and insignificant. Idols rarely have to account for cultural implications when it comes to their choreography, and as tragic as it is, 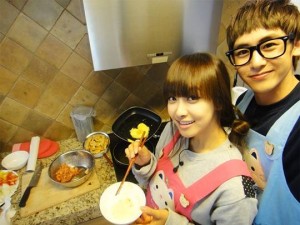 idols of recent times don’t necessarily have to fully understand the songs they’re singing either. As long as these members are able to accurately pronounce the lyrics their companies most likely manufactured, these differences are barely even noticed, let alone called upon.

But when it comes to variety, it’s a completely different case. Admittedly, some foreigners in K-pop are able to do variety just as well as their native peers, but in most cases, foreigners are much more hampered in variety rather than in the musical aspect of Korean entertainment. Variety is (or at least should be) very discussion-heavy, with gags, word play, and lively, spontaneous conversations being the heart of the genre. Furthermore, variety is often the best look into real Korean culture. The demographic and appeal of these shows are significantly different, with many shows even highlighting the traditional Korean countryside. Thus cultural understanding is much more necessary in these shows compared to the more globally universal material idol groups release.

These idols are obviously going to be much weaker in relaying gags or funny stories compared to their peers. Moreover, they might also be more wary and cautious of how they’d act in fear of breaking behavioral norms, since they know how much controversy they could receive for being rude or ignorant. And unfortunately, a linguistically weak and cautious idol just doesn’t make for the best entertainment, at least not in the world of variety. So in a genre that treasures free communication and cultural norms, what role is there to play for foreigners whose understanding in both language and local culture are weak? 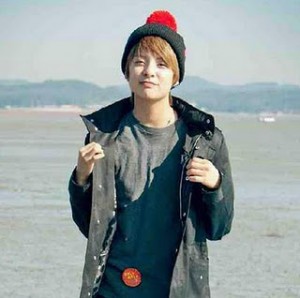 For these idols to be able to stand out or at the very least get attention, oftentimes their foreignness is once again highlighted. Already these idols risk being called one-dimensional, their unique nationality serving as their only label or distinction. But foreigners face another potential hardship in variety; the portrayal of their foreignness may not be necessarily positive. While these idols may be portrayed as highly desirable and exotic in the highly idealistic and materialistic K-pop industry, in the less glamorous variety genre, these “outsiders” risk being portrayed as bumbling, lost, and ignorant. And thus, the lost foreigner character is born.

This character is the same as any other character out there in variety. It’s just another form of scripting that entertainers use as fallbacks for consistent gags and consequently, consistent attention. This character may or may not be highly exaggerated by its user, and the level in which the character relates to its user’s actual personality varies. This means that these lost foreigners may not be as lost or as confused about Korean culture as they appear on television. There are common gags used by this persona, such as the inability to play word games, the off pronunciation, or the randoms slips of their native dialect. However, while in its execution, the lost foreigner character is just the same as any other character or persona, the connotations that surround it are much more unfortunate and restricting than the other stereotypes seen in K-variety.

This is true in the way that as a foreigner, you’re to be continually considered an outsider. While not directly excluded in group activities or laid back banter, it will be within expectations that the lost foreigner will be unable to take part in certain activities due to their lack of understanding on a subject. 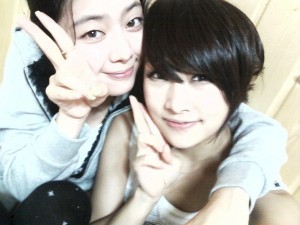 Furthermore, these foreigners are always expected to be in need of being taught the culture around them. This isn’t necessarily a bad thing, but it could translate to looking down on the individual, equating them at the same level as one who has an airhead or fool persona when they could potentially be much smarter.

And what’s ironic about this persona is that in an attempt not to be seen as boring or one-dimensional, a lost foreigner can end up lacking in depth and character. Their only prominent trait or the only trait being remembered is their foreignness, their unfamiliarity with the culture and the language. For example, a prominent lost foreigner per se is Kara‘s Nicole. Her regular appearance on Star Golden Bell revolved around teaching her Korean. Likewise, Nicole’s most prominent moments during her time as a regular cast member in Heroes would most likely be the moments that show her undeveloped Korean skills, interpreting certain words or phrases quite interestingly and amusingly. Little else about Nicole’s personality was really highlighted on the show, even though Nicole has shown a few quirks on other programs that focused less on her foreignness.

Another example of a lost foreigner would be f(x)‘s Amber. Along with her more masculine appearance, Amber‘s lack of understanding in Korean was a major part of her character in Invincible Youth 2, to the point where you can say that those two traits were really the only ones continually noted about her. Once again, this is rather unfortunate as Amber has definitely proven her sense of humor through personal and external activities. 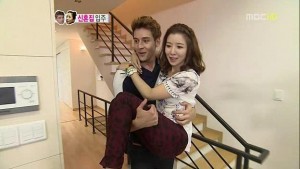 And on the the topic of f(x), back during her earlier days of being an idol, even f(x)’s Victoria was slightly seen as a lost foreigner during her time on the latter half of Invincible Youth. While her case wasn’t as severe or as restricting, from presenting more of herself outside of her status as a foreigner, Victoria’s Chinese descent and weird pronunciations were mentioned a fair bit during the show’s run.

But I’m not saying all foreigners in K-pop end up this way in K-variety, nor am I saying that all foreigners end up being one-dimensional. Nichkhun, Tiffany, and even the recent Ailee among many more have managed largely to avoid the confused foreigner stereotype, to the point that many forget that these idols were not born and raised in Korea. Nichkhun in particular developed quite a variety sense, being a highly enjoyed regular on Running Man. Admittedly Ailee and Tiffany are Korean-Americans, and thus they’d have an easier time compared to Nichkhun who is Thai or Amber who is Taiwanese and Chinese. But then again Nicole is also a Korean-American, and she is probably the best-known example of a confused foreigner, so it really depends on the individual. Also, there is Julien Kang who was recently cast in We Got Married with Yoon Se-ah. While he falls for word traps (done by the mischievous Kwanghee) and might not have the greatest understanding of Korean norms, he is far from lost or helpless, his foreignness is rarely laughed at.

But my point is that more likely than not, foreigners still have a disadvantage in the very discussion-heavy and oftentimes traditional genre of variety programming. Whether they’d be able to overcome it or not, foreigners are hampered not only by their limited knowledge in the Korean language or culture, but also through the stereotypes that surround them. These stereotypes, portraying them as easily fooled, ignorant, or confused, could eventually limit them, layering on the risk of being seen as one-dimensional as well.

But what do you think, Seoulmates? Are lost foreigners really a lost case in variety?