Miss A Wants Us To All "Fly High"

Say As, rejoice! The four girls of Miss A are back with a non-promotional single dedicated to lifting up the spirits of their fans. It’s been five months since the girls have promoted Touch, so hopefully this single will be enough to tide their fans over until their rumoured comeback in October. Since their debut in 2010, Miss A has shown a lot of growth with their concepts, as they frequently show different sides to them with each promotional period. Touch was arguably the slowest and darkest that Miss A in terms of concepts and song choices, so perhaps “Fly High” and its promise for a morale boosting, they can bring back some of their peppy and infectious music to stave off school woes.

Miss A has usually been criticized for having a lack of vocal talent albeit enough to carry a simple pop song. Although there is little validity in this criticism, JYP seems to more focused on selling Miss A as a dance-oriented group than anything else. It would make sense, seeing as the group’s strongest suit is in their dancing, even with Suzy included into the mix.  His latest attempt, with “Touch,” to do otherwise was not as well-received as their other songs, where the main focus of the song was the dancing rather than the singing, like in “Breathe” and even “Bad Girl Good Girl.” As a result, the chances to see Miss A show off their vocals have been few, it’s even rarer to see it outside of anywhere besides a concert, hence the accusations. 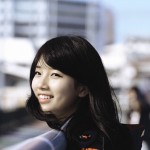 I, for one, see a lot of vocal talent with the girls, after listening to “Love Alone,” especially in Min and Fei. Suzy has shown some talent when she featured in JJ Project’s “Before The Song Ends,” which was a song that suited her sweeter singing voice. Seeing as “Fly High” is a campaign song, and not a promotional track, this might be the perfect chance for the mainstream to see the vocal talent that the girls have and with some good reception, we might get more songs promoted that properly highlight both their vocal and dancing capabilities.

As promised, “Fly High” is a uplifting song and the pace of the song is set to building up over the course of the song until reaching the climax or chorus, mimicking the feeling of spirits being lifted from a stagnant mood. This pace requires a lot of vocal control in order to move seamlessly between the slower verses and the soaring high chorus. And the girls manage to do just that, with each of them nailing their parts, and Fei and Min shining with their ad-libs. Thankfully Jia isn’t relegated to a rap break in this song, and has her moment of showing off her vocal chops. Suzy easily holds the softer parts that are right before the chorus, and the four of them strongly carry the song. It felt so great to hear the girls focus on their vocals again that the song itself felt short and made me want to listen to more songs with just the girls singing. I must be still suffering from Miss A withdrawal. 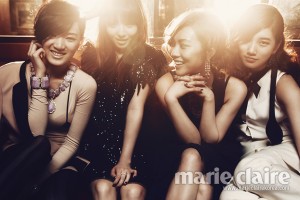 The MV itself is a behind the scenes look at the girls’ practising and recording the song, with each of them acting dorky and fooling around with each other. Watching the four of them together is always a treat, so it would impossible to not feel lighter after watching this MV and listening to the song at the same time. The four girls seem happy and healthy, with Fei looking as stunning as ever, and Suzy and her cute antics. Even just simply dressed with a baseball cap, Jia oozes confidence and Min and her hair are looking really great.

This song and MV makes me excited for their fall comeback, despite the hefty competition, and makes me beg for JYP to let the girls’ sing a soaring ballad for once.