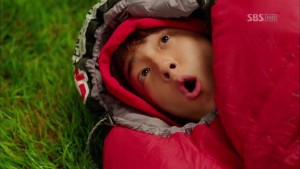 As we enter the Fall season and the month of September, K-pop has been laden with divine dramas, dazzling debuts and vivacious variety. We learned that: MBLAQ‘s Mir was NOT hired for his b-boying skillz, Julien Kang checks his eggs before buying them which is what I was taught to do–but apparently not the thing to do in the ROK, how many Running Men it takes to bring down Kim Jong-kook, that rookie group 24K is golden, 2PM celebrated their 4th anniversary, and even though To the Beautiful You‘s storyline is at times a tad bit too unrealistic–like super paintballer Kang Tae-joon–it’s worth watching if only to see Cha Eun-gyul’s aegyo-ness.

What 5 Things in K-pop happened last week that I think were a bit more special then the rest?  Keep reading to find out and as usual if you’re not up-to-date on your K-pop turn back now because spoilers will most definitely ensue.

Baek A-yeon was one of my favorites on the first season of K-pop Star from the very beginning because I thought she had a great personality and voice.  I’m glad she was able to sign with JYPE and is now the first of the K-pop Star finalists to debut.  She just released her debut mini album I’m Baek which consists of 5 tracks including the title track “Sad Song.”  A-yeon’s voice shines from her lowest registers to soaring heights in the song composed by Super Changddai with lyrics from JYP, himself.  I see a bright future for A-yeon, nothing at all to be sad about.

South Korea’s Olympic Medalists in Judo Song Dae-nam(gold), Kim Jae-bum(gold), and Cho Jun-ho(bronze) along with their coach Jung Hoon were the special guest on this weeks show.  I had no idea who these men were before the show, but you can bet after their entertaining appearance on the show that showcased their personalities–I looked up more information about them.  Other than letting Sistar‘s Bora take them all for a spin, and showing the girls some self defense  moves it was the athletes’ visit to a jjimjilbang with Bora, Suzy and Kim Shin-young (and her non-manner hands) that had me in stitches and well, the view wasn’t so bad either.  The visit was especially touching because of Song Dae-nam, who almost quit competing 4 years ago but decided to try for one more Olympics and made an unexpected golden appearance, because he will now retire from competing in judo after finally realizing his dream of Olympic gold after twenty plus years and begin coaching instead.

Seo In-guk and  A Pink’s Jung Eun-ji had a special stage on last week’s M! Countdown where they sang their duets from the OST of Answer Me 1997. The duo sang “Our Love Like This” and “All for You” on the show and unlike some people who couldn’t make up their minds, I made the difficult decision of picking their performance of “All for You” as my fave.  Their voices really wow in the perfomance, I mean did you hear Seo In-guk wail? Seriously awesome.  If I didn’t already love them from the drama, I would have definitely become a fan after this.

2. No Dancing, No Ballads

It was Hip Hop Night on the last episode of Yoo Hee-yeol’s Sketchbook.  The audience was really treated to a K-hip hop spectacular as performers included: Dynamic Duo, Tiger JK, Yoon Mirae, Bizzy, Mighty Mouth, MC Sniper and more.  Among the spectacular performances of the night was a medley by the reigning queen of K-hip hop Yoon Mirae accompanied by her husband the king, Tiger JK, and Bizzy.  The performance ended with a rousing rendition of Tiger JK’s “Monster,’ accompanied by his wife and Bizzy that got the crowd into a ‘frightful’ frenzy.

1.  Seriously was this even a question?

Shi-won and Yoon-jae‘s kiss on the stairs after finally acknowledging their feelings for each other.  I think I saw fireworks. And Shi-won giving Yoon-jae the cold medicine because she was now cured? Classic K-drama moment.  Answer Me 1997 can you get any more wondrous?  Well with two more episodes, I guess you could.