ZE:A Tries to Piece Everything Together In "Phoenix"

Following promotions earlier in the year for “Aftermath” from their second album Spectacular earlier this year, Star Empire‘s nine man boyband ZE:A returns with new single “Phoenix.” The single is the first to top a chart since the group’s debut, with “Phoenix” taking top spot for a couple of hours at music site Bugs. Not quite an all-kill, but a good result nonetheless for the two year old group.
The first thing that captures you about “Phoenix” is the beat, followed by the  synths accenting the percussion in the verses before taking over the chorus, which swells with the vocals. There have been a spate of songs in K-pop recently with rather anticlimactic choruses, so a song with a more traditional build-up of musical climax is great to hear. As conventional it may be, it nevertheless suits ZE:A’s sound well, with the only worry being perhaps the amount of processing of the members’ voices being a tad more than what could be deemed an appropriate level.
The lyrics of “Phoenix” was another plus-point: penned by Jun-young, Min-woo and Dong-jun, they are a straightforward message to the listener about overcoming obstacles and rising from adversity like a phoenix rises from the ashes. Like the music, it’s not unconventional, but there is a lot to be said for good execution. One particular highlight is the English lyrics in the song, which are grammatically correct actually make sense in context of the song and pronounced correctly to boot (I’ll ignore Tae-heon’s pronunciation of “law” on the basis of artistic license, as it rhymes with the previous line in his rap); it’s great to see the good English continue on from Spectacular.
All in all, it’s a normal, but good, song. Will the accompanying MV be the same?
[youtube http://www.youtube.com/watch?v=iFEC-bcJJj0] 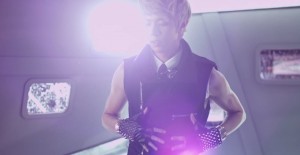 The sets for the MV follow a futuristic theme in shades of blue, green, red and silver; the presentation of colour via lighting rather than directly like have a painted wall is similar to that in labelmate Nine Muses‘ MV for “News,” though ZE:A’s own MV goes easier on the sequins, mirrors and glitter and features low lighting harsh angles instead, resulting in a more rugged masculine look for the boy group’s sets. The lighting effects themselves also enhance the MV: turning off the lights to announce the bridge; the ashy dust in the the darkened grey corridor catching the bluish light of the solitary spotlight when kicked up in the air by different members; the purple lights perfectly complementing the green set.

That being said, there were some misses: the angled red tube lights seen in some of Kevin‘s solo shots (and which could actually be seen behind the green wall when the lights were on) were a nice change from the more cooler colours (as was his glow-in-the-dark sleeveless shirt) but there was not enough of these shots, and as a result made the few shots that did make in into the MV seem quite superfluous and throw-away.  The biggest miss, though, was with the main set in which the group’s dance was showcased. While the steel-like frames and vast white canopy still fit with the look of the other sets, the wood panelling just jarred with the whole aesthetic, making it appear more like an attic one would see in an episode of Grand Designs rather than a part of the “Phoenix” MV. 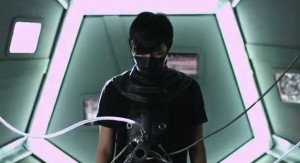 As for the styling of the members themselves, ZE:A,  it’s quite ordinary with mostly black, some white outfits interspersed in solo shots. Unfortunately, rapper Hee-cheol seems to have contracted the random prop virus, being shown with both a lower-face mask and some kind of contraption with tubes running out of it strapped to his chest. The colour blocking of the black, white and raspberry red clothing in one of the group scenes was very heavy on the colour blocking  but also provided a respite from the other outfits worn throughout the MV. The choreography wasn’t showcased much in the MV, but the chorus is the highlight, with some really fun moves like the leaping move at the start and the reverse body roll, and a generally easy-to-follow yet still interesting dance.

“Phoenix” is a pretty good song, and while a literal interpretation or an over-reliance on the phoenix motif was thankfully avoided in the MV istelf, one can’t help but feel that something was lacking with this MV. All the elements are there, even with some misses, but there is nothing that cohesively ties them all together. The set up of one main set with multiple smaller spaces is great way to organise the MV, but the aesthetic appeal is just not enough for this MV to succeed based on looks alone. The “Phoenix” MV is at best serviceable, and for that receives a score of 2.8 out of 5.

What did you think of “Phoenix?” Do you think the MV suits the song? Would you have like to seen a different kind of MV instead? And what was going on with Hee-cheol and his gadgetry? Leave your comments below!