Ride the "Sea of Moonlight" with LOEN TREE 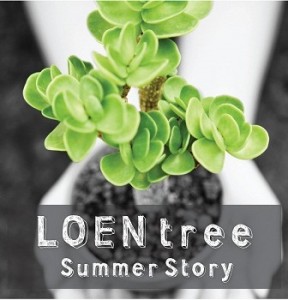 Company “family” efforts — a la JYP Nation or YG Family — have become increasingly popular as of late, with almost every company with a large enough roster attempting one for a variety of reasons. Now it seems as if it’s LOEN Entertainment‘s turn to follow the trend as they recently announced the formation of LOEN TREE, LOEN’s so-called “family.” The line-up includes Sunny Hill, Brown Eyed Girls‘ Ga-in whose solo efforts are done by LOEN, “Korea’s little sister” IU, and tragically-named upcoming girl group FIESTAR.

Personally, this has been one of my more awaited family projects as LOEN has always managed to create some quality music and great visuals with their relatively small yet thematically diverse artists. I was curious to see how LOEN would utilize all their artists together for a cohesive family album, to be named Summer Story.

While the project’s first release “Sea of Moonlight” wasn’t fully able to answer my previous questions as it only featured IU and FIESTAR, who both seemingly have similarly youthful images, it was still a pretty good release that’s very fitting for the theme of summer. While SISTAR demonstrated summer through the beautiful beaches of Hawaii and Beast through a party-filled trip to New York, 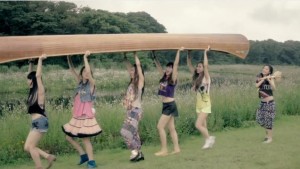 LEON TREE wisely chose to illustrate summer through a colorful and laid back camping trip, complete with gorgeous landscapes and warm campfires.

The song itself has a very clear 80’s synth-pop vibe that gives the song a very lively yet relaxed feel. While the talk-rapping wasn’t my favorite thing about the song, the verses done by the girls of FIESTAR gave the song a bit of playful girlishness that was enjoyable with IU strongly handling the chorus. The lyrics talk about escaping to a summer paradise with the one you love, but it stays open-ended enough that you can interpret it either as a summer romance or as a summer outing with friends. The teaser for the MV hinted at a slower, more delicate song due the piano intro and seemingly subtle vocals. While the perky, 80’s-inspired track actually released was unexpected, it still made an simple yet enjoyable song overall. 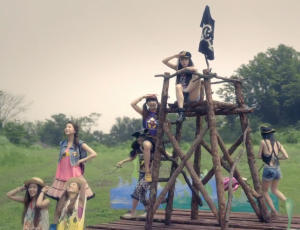 The MV was also similarly summery and lighthearted, featuring some pretty whimsical yet still stunning visuals that are signature to LOEN at this point. The MV was shot under a filter, with the morning scenes appearing bright and airy and the night scenes appearing warm and subtle, that helped create a successful summer vibe. While portraying a camping trip, the MV still managed to cleverly add a sea motif, not only through the body of water seen at the end, but also through some props such as the sandbox, the make-do pirate boat, and the water cut-outs. The combination of the gorgeous earthy setting and the almost child-like sea props added even more quirkiness to the already fun video. Furthermore, the use of the puppet show and sandbox also added a childishness to the video that, while unsettling to some, fit with the young girls’ images and the overall care-free, almost Peter Pan-like feel of the video.

The tranquil setting they used for the campsite was gorgeous to say the least, and it definitely helped boost the aesthetics of the video. The meadow landscape shown in the beginning by the revolving camera looked absolutely stunning under the cool filter, 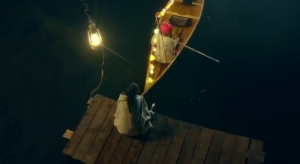 and the sight of the lit-up tent against the night looked festive and stunning. The end scene when IU sends off the FIESTAR girls (presumably to their debut) through canoe was a treat for the eyes, further proving LOEN’s skill when it comes to visuals.

The video didn’t have much content as it basically showed nothing but the girls’ camping trip, but it was still very enjoyable watching the interaction between the members. It’s almost endearing to see the relatively young IU play the role of the sunbae in the presence of her juniors, playfully painting on them and serving as the captain of their almost fort-like pirate ship. The MV just shows the girls doing activities one usually does while camping from cooking outdoors to roasting marshmallows in front of a campfire to stargazing, and enjoying themselves at that. 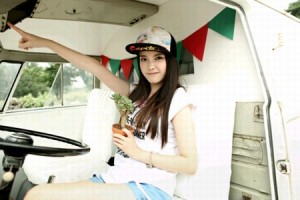 The styling of the music video was also pretty well done. The outfits worn by the girls were casual and individualized, two aspects that have becoming ironically refreshing in the K-pop sphere. The outfits looked like things the girls would usually wear, being simple and comfortable, and reflected a bit of the girls’ personalities as well. All the outfits managed to look different and distinguishable, yet as a group, they all still looked cohesive. While there were some pretty random and silly additions like the soda hat and the pirate hats — not to mention that one scene where the girls playing tag in animal costumes — but those additions just added to the quirkiness of the video.

Overall, while the MV of “Sea of Moonlight” seems to be lacking a storyline, it features some fun and quirky interaction and some stunning and whimsical visuals. Admittedly, I was a bit disappointed at the lack of the more mature Sunny Hill and Ga-in, and the light and child-like vibe of “Sea of Moonlight” wasn’t what I was first expecting from LOEN. 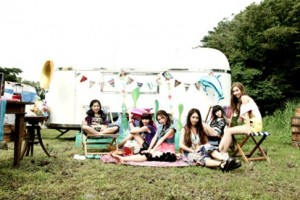 Though in all, it was still a pleasant and fun surprise that leaves me excited about what LOEN TREE’s next release would be like and what the entire album would contain with such capable artists partaking in it.

Multiple fans have observed and commented about the song’s similarity to A-Ha’s “Take on Me,” first released in the 80’s. While the similarities — particularly in the instrumental — are extremely blatant, I feel the song has a girlishness and a pop vibe that allows it to be set apart from the 80’s hit. Ultimately, I give “Sea of Moonlight” a suitable 4/5 for its beautiful aesthetics and simple format.

Seoulmates, what do you think of “Sea of Moonlight?” Was it able to charm you with its playful and whimsical feel and leave you waiting for what else is to come from LOEN? Or were you left unimpressed by the whole effort? Feel free to comment below.