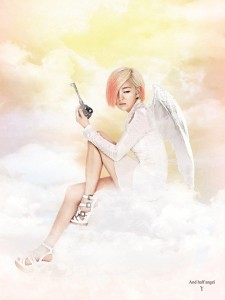 Recently, FNC Music unleashed their all-girl band/dance group Ace of Angels (AOA) through their first single album, Angels’ Story. Their concept of an eight-member girl group with a band subset is certainly curious, and it should be interesting to see how they pull off their stages, especially since drummer You-kyung doesn’t dance with the rest of the seven, and only five of the eight make up the band. The overlying concept of their debut single, “Elvis,” seems to present all the girls as angels, an idea that is also shown well in the movement of their logo. When it’s in motion, flapping its wings made from the A’s, the concept comes together quite well. It’s also a concept that continues with the 2012 theme of nonhuman rookie groups.

Angels’ Story consists of three tracks: the title track “Elvis,” a composition by labelmate Jung Yong-hwa of CN BLUE fame, and the last track, “Temptation.” The title track strikes as the boldest of the three while “Love Is Only You” serves as a R&B-influenced pop track, and “Temptation” introduces more synthesized sounds with strong vocals.

“Elvis” is an appropriate title track with its gutsy sound and show tune impression. There are two versions of this title song: the dance version and the band version. For a look at the band version, check out this fancam at the group’s debut showcase. The song is memorable and striking, especially with the repetitions of the title, “Elvis,” had quite the collection of nonsense sounds from “bing” to “bang” to “kung” to “kwang” and so forth. While those sounds do have interpretations such as elevated heartbeats or electrifying sensations, they are rather ubiquitous in the song. A look at the lyrics is quite disappointing, especially once it is noted that the song only talks about falling for this “Elvis” persona with those other sounds the equivalent of an explosion of feelings that can’t be put into proper words. Juxtaposed with strong vocals, the track is a good listen with an attractive melody on the surface. The rapping style of leader and guitarist Ji-min can take some getting used to, though it does add a distinct flavor to those sections that matches well with the background track.

The second track is Yong-hwa’s contribution to the single album: “Love is Only You.”

This song expresses a similar theme to that of “Elvis,” except sweeter and with actual words to express the sentiments and thoughts. The vocal pitches run on the higher side, with ChoA taking a bit of the lower side as well as the more powerful notes. The music sticks to drums, guitar, and higher, dream-like electronic tones in the background. The result is a lighthearted song that could have gone the cutesy route, but instead has surprising maturity with an innocent twang. It’s a definite change from the title track that suits the caring and uplifting lyrics. It’s nothing noteworthy, but it is a reasonable track to have.

The third and final track is “Temptation.”

Taking on a wicked and somber tone, this song is a good contrast to the previous two. The tone verges on the sultry and vengeful side. A persistent use of strings help amplify the frantic and upsetting sensations during the chorus, but it can drag and rely on the vocals to maintain the interest. All of this is pertinent to the lyrics that speak of a betrayal of love. Luckily the rap and bridge portions are empowering, speaking of moving on from the disaster. The vocals are particularly strong and emote in a style fitting of the song. However, the song doesn’t move. It stays at this one note level that makes it easy to predict what sounds are coming next. It’s nothing stimulating, but it’s satisfactory. 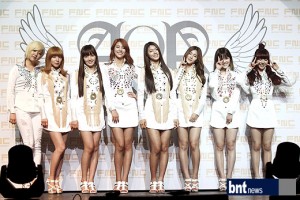 AOA’s Angels’ Story does a good job of showing the range the group has. Their group name implies that they would put out cute and innocent music, but fortunately these three tracks show decent range. There’s a strong track, a sweeter one, and a more melancholic one, all three of which allow for the vocals to shine. A band version of “Elvis” utilizes the musical abilities of members, though it almost seems a waste to have a band if one track is all they’re going to get. Hopefully that won’t be the case in future releases and performances from the group. Overall, all members of the group seem to be at least decent vocally (minus You-kyung with her hazy status), and they released a single album that didn’t have faults, but really had just one track above average. It’s a pity that one track didn’t utilize a greater range of vocabulary for its lyrics. AOA’s debut single album earns a 3.3/5.

Seoulmates, how did Angels’ Story do for you? Is FNC Music’s group of angels your cup of tea? Leave a comment letting us know what you think!