A Drive Through Seoul with "My Dear Enemy"

Standing in a place between a road movie, a comedy and a drama, My Dear Enemy opens with a long and complex sequence shot in which everything happens but nothing’s really going on. My Dear Enemy is basically an extension of this first scene: random conversations, characters that leave just as they came, a beginning that doesn’t feel like a beginning and an ending that doesn’t really end. 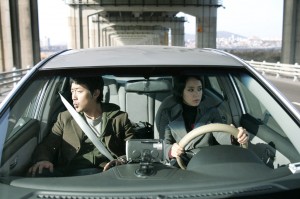 The film opens when Hee-soo, a woman in her thirties, arrives to a horserace stadium looking for her ex-boyfriend, Byung-woon, to get back the three million won she lend him one year ago. Although Byung-woon doesn’t have the money, he promises to get it by the end of the day, and this way starts a one-day journey around Seoul in which Hee-soo accompanies Byung-woon as he visits acquaintances recollecting the money he owns her. And as the day goes and Hee-soo and Byung-woon talk about their past and meet different characters, both the spectators and the protagonists themselves get to learn more about them and the relationship they shared.

Directed by Lee Yoon-ki, a director who’s been leading the wave of intimate dramas in Korean of the last years with titles such as Ad-lib Night and more recently Come Rain, Come Shine, the movie develops a big part of the footage inside a car. Lee Yoon-ki manages, however, to avoid any kinds of claustrophobic or repetitive feelings, and goes even further by integrating the car in the camera work and creating a intimate atmosphere for the characters. This is also thanks to a beautiful photography, that takes advantage of the reflections in the windshield and the fact that within such a limited space, most of the shots have to be close-ups. The movie overall hasn’t a very striking image, but it is a polished one, especially the colors and the character’s shots and also especially, as I mentioned before, the car scenes and the city of Seoul being portrayed through the reflections.

The story and the secondary characters are a mere pretext for the character development — yes, they meet people, they go to different places, but at the end of the day it’s just the two of them again. Thanks to a fantastic and slow-paced script, and as opposed to most of the characters they meet in their journey, who are actually quite one-dimensioned, the two main characters manage to get out of their initial archetypal appearance: neither is Hee-soo as apathetic as she looks nor is Byung-woon as shallow as he seems.

But My Dear Enemy isn’t either exactly an exercise of character analysis, and the spectator will eventually end up having more doubts about them than they started with. The movie is just what it seems: a slice of life, a day in the lives of two people whose reunion sheds some light to their past, but doesn’t define their future. 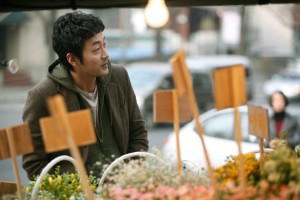 Heavily relying on the chemistry between the two main actors, Jeon Do-yeon and Ha Jung-woo, the movie showcases an excellent example of a right casting. Jeon Do-yeon, one of Korea’s most demanded actresses, temporary abandoned the tortured roles she’s known for and perfectly portraits the role of Hee-soo, an uptight and cold woman with no job, no husband and no money. But it is Ha Jung-woo, a rising star by that time and now a consolidated actor, that shines more, probably because his character is much more charismatic and also seems to be the key to understand Hee-soo’s cold behavior. But most importantly, they do work together. Although Jeon Do-yeon is six years older and was a reputed actress when Ha Jung-woo was starting to emerge, once they start playing the roles of Hee-soo and Byung-woon none of these differences are to be seen.

My Dear Enemy may not be everyone’s cup of tea: it is slow and there isn’t much action going on. But for those of us who appreciate subtlety over obviousness, enjoy the small moments that define a relationship and can deal with unended stories, My Dear Enemy is a gem. And maybe some will find frustrating the few that gets resolved at the end of the movie — I myself can only find appealing the fact that My Dear Enemy will leave you wanting to know more. 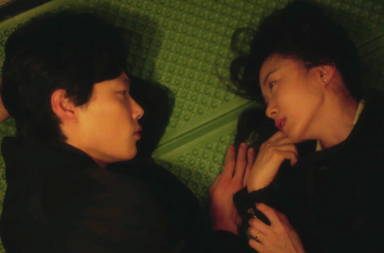