Will 2NE1 Chicken Out? 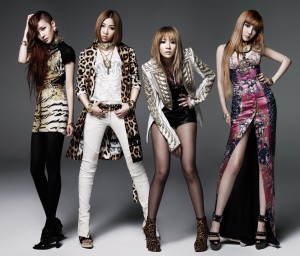 Probably one of the most hyped-up comebacks of this summer, with fair competition from Super Junior, the tough ladies of YG will heat things up a bit (more) after a year of absence from the idol music scene. The teaser pics have been released, two snippets from their first song and also an announcement for a world tour. July will bring 2NE1 at its best back on our computer screens. So we can cross our fingers and patiently wait for their music video on July 5th, right?

Or we can burn our brains off trying to figure out what these girls will bring to the table. Yep, this is a lot more likely to happen.

2NE1 carried the big guns for the girl groups in this industry. Even from debut, their fashion choices were… uhm… atypical, their music mindbogglingly auto-tuned and their style full of promise, with mad charisma winning over the K-pop fandom. The 2NE1 EP featured the energetic “Fire” along break-up tracks, complemented by the infamous “Let’s Go Party.” The following full album proved to be one of YG’s best ideas, with a variety of tracks that managed to show a multifaceted 2NE1: the fierce “Can’t Nobody” or “Clap Your Hands” paired with sissy break-ups a la “Go Away” or “I’m Busy,” going all over their sensitive side with “It Hurts.”

Another year, another album: 2011 brought their second mini-album which is entitled until now –drum-roll– 2nd Mini-Album. No, seriously, their last studio effort didn’t have a proper name because instead of releasing the mini-album all at once, they promoted a new single from it every three weeks. And this one was the compressed version of anything 2NE1 can pull off: the egocentric “I Am the Best,” the melodramatic “Lonely” and the fizzy “Hate You,” with “Ugly” being a surprise for the fans. But after this short recap, all these three albums indeed raise some questions and issues about the girl group that I am eager to see tackled with the next release. 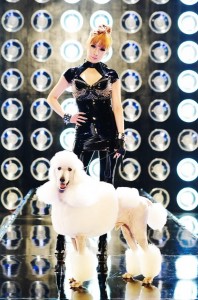 One of the things that has been bothering me for a while is their tendency to lean too much on their image. The so-called “girl-power” that they wonderfully portray throughout their personas, the charisma they bring on stage and the way it has become not only a side of them, but the impersonation of what they are is probably one of their most cherished appeals. But with lyrics like this, I’m left wondering if it’s all about looks:

I feel like so many fans are eager to see only what they don’t want to see. It’s no news that 2NE1 represents an improvement through their image from the aegyo groups and I’d go forward and say that they’re also better than some of those that do the sexy concept. But it needs to reflect in their music. It is hardly enough to brag about your strength and independence if the material you put out goes against your statements. What was “Ugly” after all? The video showed them teaming up against the society’s ideals of beauty. But what about the song? “Ugly” is about four girls that believe they’re unworthy of anything good because they’re ugly. They don’t change their statement until the end, nor do they revolt against the unnatural standards that society has. They whine. That’s all. I’m willing to see if they will be challenging themselves for this album and push the envelope through their content.

Speaking of the devil, their lyrics usually gravitate around two main themes: a good dose of rehab after a break-up and self-adulation. There’s nothing wrong with that: they offer different variations, keeping our eyes and ears glued to them. But honestly, getting over a break-up is not a declaration of independence. As long as you’re not clinging onto your past boyfriend, you’re just a healthy individual with a firm attitude. For these two reasons, I was both ecstatic and underwhelmed when I heard the teasers:

I laughed my ears off when I heard Minzy say “molla.” Really?

The song is titled “I Love You” and I think the lyrics give a fair hint to where this will be heading. Yes, we’ll have 2NE1 doing a simple, wholehearted love song. But the point is, if the video will be something different, it is very unlikely for anyone to actually notice that they’re doing the exact same love song a lot of girl groups do. So why am I still excited?

To me, 2NE1 has been one of the groups that matured throughout their releases and have beautifully grown in the eyes of the public. They showed raw talent and personalities, but at some point it began being all about words with no back-up. Yes, you are tough, but what else? The girls developed with time another side, a less bitter sensitive part which didn’t take away their power, but converted them into human beings. I’m talking about tracks like “It Hurts” or “Lonely.” The new “I Love You,” as long as it won’t be cheesy, could provide just that. The girls are in love, it shouldn’t be a vulnerability or a weakness. Exploring their sweeter, friendlier alter-ego is not a problem, but a welcomed change of pace.

Another worry on my side would be their upcoming world tour. From the snippets, “I Love You” sounds like a low-quality mid-tempo track. While Big Bang‘s preparations for their international tour didn’t affect the quality, it seems that 2NE1 will beg to differ. The melodic line appears to be simple, with some heavy electro influence that blends out their voices in the background. Also, the teaser images have the girls posing and nothing else. Simple and dull; although I hope it won’t be the case with the video. 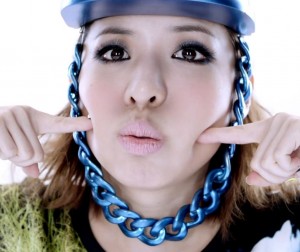 Then, there’s also the problem of the group’s dynamics. I’ll admit, Dara is first on my blacklist. The group has a very strong fanbase and I’ve heard my fair share of excuses regarding her role but sorry, but it’s just happening for me. If they needed a mellow part to obtain a balance in their songs, any member is able to tone down her voice a bit and produce the same effect. And Bom can publish some selcas when she’s bored, if they want a socially active member. Dara does these cutesy faces and every time she’s asked to do fierce, she plays the part with a sense of mockery that doesn’t fit. Her newest half-shaved head? Who are they trying to fool? The girl could be a valuable member of the group, but the management oscillates between cute and fierce, which is not working. If they displayed some of Dara’s mysterious sensuality or just play with her bubbly self more instead of trying to fit the 2NE1 image on her would bring better results.

Could I get also some Minzy? To everyone’s surprise, she has a great voice and better vocal control than Bom. Why push her in the background? And please, just please, stop the CL obsession. She doesn’t need solo activities: 2NE1 is her solo project, featuring three other artists who compete in their own way for the second-best prize. But I guess that having Dara and Minzy compressed in a teaser while CL has her own doesn’t look good for my wishes:

“I Love You” and the third mini-album can go in a lot of directions. It can glue the members together, solve some of its defective dynamics, fulfill their musical potential and emotionally challenge the audience. Whether it will do that or not, we will have the month of July to define our expectations and party with our inner blackjacks. So what do you think? What are your predictions on this comeback?