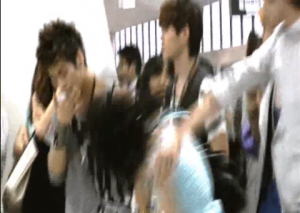 Within the confines of the public K-pop news circuit, it can be pretty easy to access official material released by any given company. There are always a few hidden gems, however, that are circulated privately within fandoms through grassroots efforts to procure fancams and fanaccounts. For someone casually skimming through the web for K-pop news, it is unlikely that they would happen upon these clips unless they were specifically trying to dig into the group’s unofficial material.

Since fancams are oftentimes not given attention outside of a fandom — yet contain many golden moments that the rest of us are missing out on — the request that we made of our writers this week was to give their thoughts on fancams, and to share a favorite fancam clip that they feel deserves some more love and attention by the public.

Gaya: I have no problem with fancams taken during concerts, outdoor performances, variety show appearances and fansigns, as those are times when idols are working; thus I feel they are “fair game” on those occasions. And although airports may also be seen as fair game, I can’t bear to watch those or those taken of idols when they are “off-duty.” I feel like I am violating idols’ privacy by doing so. 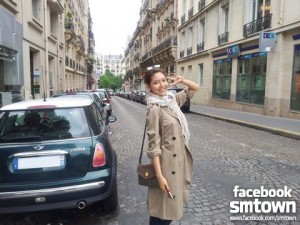 But going back to airports, reportage of what (and who) idols are wearing is a growing part of celebrity news in Korea as idols partake in more and more overseas activities, and some companies like SM have even taken to photographing their charges in the airport and even in their seats on planes. This could be part of an effort to thwart fans from taking their own photographs and videos, but they could also be encouraging fans as well: “well, if the company is doing it, then it’s OK for me, too.” I guess I’d prefer “official” photos as at least idols are more aware and prepared for them, but either way they’re still under the glare of a camera.

The worst fancams though are those taken from very close quarters, which essentially invade the idol’s personal space–and I’m not too keen on watching eight minutes of my bias looking extremely uncomfortable. In fact, my least favourite fancam is a prime example of all of the above, wherein the members and managers of Exo-K were chased around the streets of London by fans. I think you could measure the distance between the two parties in centimetres, and the behaviour of the fans was just plain embarrassing.

Amy: I think fancams are great because they’re another layered facet of fandom. But my biggest pet peeve are people who complain about fancams that are invasive and very actively consume fancams at the same time. You can’t have both, people. I’m not talking about fancams of performances, because those are pretty standard for any fan/artist music relationship, but the fancams of them outside of performing, which is what majority of K-fancams are of, anyway.

Fancams contribute to a huge part of how we form opinions of groups and members, and to use those as measures of how much we like/dislike an artist while simultaneously disavowing how they were acquired is hypocritical to me. I think a lot of fan action with artists is deplorable (and sasaengdom definitely is a part of this) but those who consume these fancams, watch them, reblog gifs from them, and then bitch about how invasive the fans who took these fancams are? Are you kidding me?

But enough of my angry diatribe. My favorite fancam is actually a really old one, from when DBSK was promoting “Purple Line” fairly briefly. It’s during a rehearsal of “Purple Line” and Junsu keeps going on while the rest of the guys in back are finishing up, and the guys totally just let Junsu make a fool of himself dancing solo while they look on. It’s adorable and hilarious.

Johnelle: Fancams are a great way to see some of your favorite idols in candid moments and I enjoy them–although I do agree with Gaya that I generally only watch those from concerts, outdoor performances, variety shows, and other times when idols are working. I do generally draw the line at watching fancams taken when said fans were stalking the idols on their time off, and I totally think that video or pictures taken at the idols residences, like the recent ones taken by JYJ‘s sasaeng fans from CCTVs they installed in Yoochun‘s residential parking lot–which really is sick and an invasion of the idols privacy.

Although their actions are not always legal, I do appreciate fans who upload fancams from various concerts that I wish I could have attended–it’s the next best thing to being there yourself. And it’s not without some risk that these fans take the videos because at some concerts you run the risk of having your camera/phone/camcorder taken away or in the worse case scenario–you could get thrown out of the concert. As for pictures/videos taken at airports… it’s a fine line on how obtrusive the fan was. For the most part, I would say it’s okay because, I mean, even regular media takes pictures of the idols at airports, but it is still intrusive.

My fave fancam is a recent find I saw on tumblr not too long ago. At Big Bang‘s Global Warning concert in 2008, the backing track for “Always” breaks, and without skipping a beat the boys continue on with GD beatboxing and the rest of the boys singing a cappella. I almost wish they had just let them keep singing until the end of the song than putting the backing track back on.

Natalie: To be honest, I don’t watch a lot of fancams. I’ve never really started watching fancams until I got into the EXO fandom, and that’s only because Kris always looks so darn good at airports. I’ll occasionally watch a fan cam to catch my favorite idols at their most vulnerable, real moments, when they care less for acting like idols and acts more naturally. Some idols, such as EXO-M’s Lu Han, are more endearing through fan cams. Lu Han tends to be shy and quiet during interviews but often looks playful and funny in fan cams, joking around with Lay or Xiumin or making weird expressions.

My attitude towards fan cams is more love/hate. I love watching my idols be silly or affectionate with each other but I dislike the invasion of privacy that comes with fan cams. One example would be a fan’s extremely detailed fan account and video of Kris and Lu Han on a plane. The fan sat near them and observed and even recorded them throughout the plane ride. To me, this was a gross invasion of privacy. Yes, I did like the cute gifs that came from the video wherein Lu Han plays with an air sickness bag, but I was disgusted by how Kris and Lu Han couldn’t even have privacy on an airplane. Same with the Disneyland and London videos; I disliked how the boys were stalked and harassed by fans despite enjoying seeing the boys interact with each other.

Subi: When it comes to fancams, invasion of privacy and personal space is definitely an issue and there is a very fine, and some would argue, arbitrary, line between what is considered “acceptable” and “unacceptable.” I do think they’re a good way to get a glimpse of a live experience and “off the record” (if there is such a thing in K-pop) moments. But something I think is also an issue are how dedicated fans are to watching fancams, regardless of what kinds. There are fans who are CONNOISSEURS when it comes to what I would like to call, visual crack for K-pop fans. They go through one, five, twenty, and before you know it, they’ve spent their entire night watching fancams. Some people just don’t know when to stop and while I guess there’s no harm in that, K-pop fans become sp fixated on K-pop that after a certain point, it becomes a major defining point in their life and watching fancam after fancam is among the top gateways to such a reality. It’s the only thing they talk about on their social media feeds, the only thing they can really talk about in great detail and nuance, the only thing they really enjoy. But if fans are okay with that, then great. Nevertheless, the eerie parallels between addiction and fandom is worth noting and again, fancams are an easy gateway into that kind of lifestyle. I don’t see long, lasting harm in watching fancams generally speaking, but the amount of fans I know that have seen the most obscure videos on YouTube and catalogue them in insane detail within the walls of their mental library is a little alarming.

That being said, I only ever really watched fancams when I first got into K-pop and for a few years afterward so if I had a favorite, it escapes my memory but here is a recent gem. Some people think it’s gross and embarrassing but in the words of all the little boys from Lord of the Flies, “Sucks to your assmar,” because the first time I watched this video, it made my nose bleed. In a good way. If there is such a thing. Oh lordy, someone publish an official live or put this shit on concert dvd:

Fannie: I’m in the same boat as Gaya… while I do appreciate most fancams for providing me with a more intimate look at my favorite idols, those that are taken off-hours do make me feel a bit uncomfortable, especially ones that are taken without the idols’ consent or awareness, such as those taken while being followed around on the streets.

I think that this very feeling of artificial intimacy is exactly what drives K-pop idolatry so fervently; although idols are marketed as “perfect,” they are far from inaccessible. The smallish size of the country and the fact that essentially all the stars more or less gather in the same city (Seoul) to pursue their career, means that it’s much more likely to encounter or even track the movements of someone famous if you really set your mind to it. However, what fans really need to remember is that these feelings of having a reciprocated personal connection with an idol through a video are still more or less artificial. Especially for the more intrusive videos, let’s just say that the intimate moments you may have felt, are not being shared at all; rather, they are being stolen.

For my pick of favorite fancam — or fancam-esque — video of all time would have to be the one of Ye-eun singing her first self-composed song, “For Wonderful,” at the 2nd official Wonder Girls fanmeeting back in 2008. This song was never recorded in studio, nor was it ever released officially; in fact, the only version out there as far as I can tell, is from this video. Normally I’m not a big fan of hearing audience noise during a recording of a performance (I can’t even begin to count the number of times that fanchants have completely ruined a listening/viewing experience for me) but I really didn’t mind it in this fancam, because you could palpably feel the real connection between Ye-eun and the audience, as well as the outpouring love throughout the whole performance. It really was a shared moment. Okay yeah, I’ll admit it, I cried buckets when I first watched the performance way back in 2008 (it’s what made me a fan of Ye-eun in the fist place)… and the video still manages to make me teary-eyed to this day.