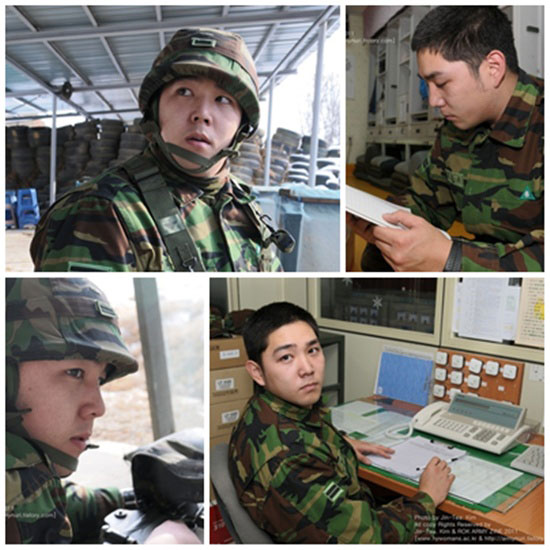 As many of you know, Super Junior member Kangin recently made his long awaited return from his military enlistment to the K-popverse, bringing tears of relief to many nostalgic ELFs and even Eunhyuk’s mom. With K-entertainment finally bearing news that SJ would be once more gaining a member rather than losing one, fans across the fandom exhaled in a great sigh of relief.

What some of you may not know, or may not clearly remember, is why Kangin shipped off to the military in 2010, at the young age of 25, in the first place. To recount this tale we go back to the fall and early winter of 2009, which was perhaps one of Super Junior’s darkest hours as a group. Kim Kibum, after being found AWOL at Super Show 2 despite being part of the SS2 ad campaign, announced his hiatus from the group to pursue acting, and, in December 2009, Chinese member Hangeng filed for official contract termination,won his case, and left Korea to pursue a solo career in China.

Here’s where Kangin comes into the picture: in September 2009, Kangin and some of his friends were involved in bar fight that eventually turned into an assault case. Though Kangin was ruled out as acting primarily in self-defense, the brutish bar-fly image wasn’t exactly idol appropriate. One month later, in October 2009, Kangin was charged with a DUI and a hit-and run for crashing into parked taxi cab with three people inside. Though he initially fled the scene, he later turned himself into the police station approximately six hours later, only to be found he was still being charged and fined $8,000 USD. With the community and netizens in an uproar about Kangin’s recent behavior, SME had no other choice but to announce Kangin’s hiatus. Kangin was later found to MIA from SJ’s fourth studio album Bonamana in May 2010, as it had been revealed that he was in preparations for leaving for the military later that year.

Surely, despite the inflammatory post-”Sorry, Sorry” success, it was a dark time for SJ as the official line up underwent some serious alterations. The members themselves even openly remarked on their disappointment, particularly concerning Kangin.

When Kangin first became involved in an assault case, we thought that we needed to shield him and protect him. Kangin showed that he was sorry to us and really did reflect that on his actions, but we couldn’t help but feel a sense of betrayal when one month later, he became involved in another drunk driving accident.

And of course, the weight, or should I says eyes, of the world seemed to be on the one SJ member that appeared to be unraveling at the seams. Kangin had never given most fans or K-entertainment in general any reason to doubt his decorum or professionalism, however the incidents of the fall of 2009 speak to a behavior on the contrary. It was never revealed whether or not Kangin was dealing with some tough times, such a family issues, conflicts with his company, or bouts of depression that idols are so easily susceptible to, which could otherwise vouch for his poor decisions. Either way, what was done was done, and Kangin’s image was a sorry mess. Which is why perhaps both he and SME decided some time out of the public spotlight would do Kangin and his situation some good, and enlistment seemed like the perfect fit.

Nearly three years later, with Kangin discharged and SJ well into promoting their sixth studio album Sexy, Free. and Single, it seems as if the dust has finally settled. Upon his return, Kangin said:

This is something I’m feeling for the first time since being born, and more than feeling light hearted and free right now, I think what’s more important is what’s ahead. I think that now is the time for myself to work so that the hurt that I have caused can have a chance to heal, The first thing I do every morning when I wake up is to look in the mirror. For 21 months, I continued to look at myself in the mirror…continued to evaluate myself. There were so many things to change for the better, and I realized that there were so many bad habits that I became accustomed to without even knowing it. I focused on changing those kinds of things to the best of my ability.

And I’m sure any anger or hatred of disappointment has, at this point, been eased by time and other sensational topics that typically arise in K-pop. At least from the way I see it, no one is still harboring vicious sentiments regarding Kangin and his past, and we as a music community could really care less by now, since justice had been wrought and Kangin reprimanded for his lapse in character. 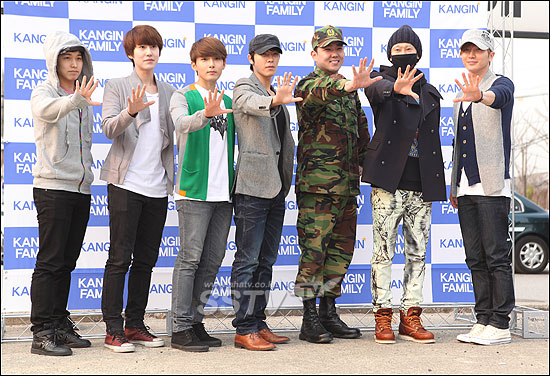 But even in this joyous moment of reunion, it seems as if Kangin is still being shielded from much of the limelight. He got maybe two lines in “Sexy, Free, and Single,” even though from what I remember he was never too shabby as a vocalist. He’s also barely noticeable in the choreography, and even appears distant as his stage charisma still seems absent. He may just be getting back into the groove of things, but for all I know, Kangin could aslo be desperately clinging to his post-military seriousness to avoid any more potential displays of poor behavior that could otherwise further damage his image, but in nearly every public situation he encounters. But even so, idols return from the military all the time with bright smiling faces and antics up their sleeves–take Boom and Shinhwa for example. Nothing lackluster there. 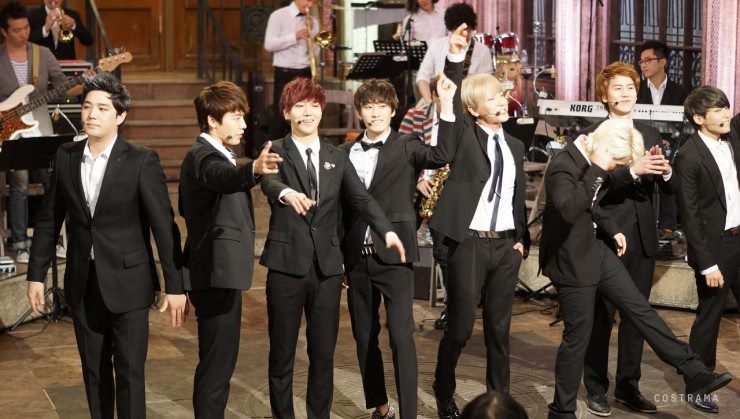 Surely SME has already warned him of the err of his ways, and how this reflects on Super Junior and SM as a company. So naturally, after being a fan of SJ for so many years, and I can’t help but feel as if Kangin is being held back or if he is holding himself back from truly shining in this homecoming. Sure, he had a couple of bad days which was featured in some nasty press, but it saddens me to think Kangin feels it necessary to adopt this stony, practically emotionless approach to his performances and appearance for the sake of saving face. And while I can understand why he would be cautious, part of me would dare to say he’s being too cautious.

Of course, I am also no mind reader and there is no way I can aptly criticize Kangin without acknowledging the fact that I don’t completely know all that could be swimming around in his head. Still, I could not help but notice his distant demeanor on various music stages and even on the season two finale of SNL Korea, hosted by Super Junior. And while I know his return must have also bore with it much stress and anxiety about returning to the idol world having known his poor decisions, it truly disheartens to see Kangin so quieted. 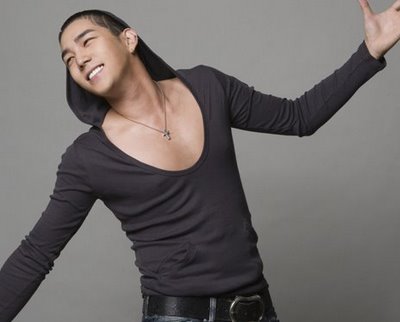 For now, however, all we can do is continue to watch, and wait. Perhaps time will assure Kangin with some confidence in his abilities and he may be able to break out of his begrudgingly humble shell. And while I’m not condoning what he did in the past nor trying to defend it, I can’t help but notice the kind of physical and emotional drain Kangin has undertaken as a result of his actions and how it is playing out into his career in this moment.

What happens next with Super Junior is still unclear. Their popularity appears to be going strong, and the Kangin fiasco seems like a thing of the past, even more so every time Leeteuk distracts audiences by unbuttoning his jacket nearly every time he’s on stage. I earnestly am hoping for the best for Super Junior and for Kangin right now, and hoping that Kangin can once again find his footing as a charismatic idol. But I guess now that enlistment can be checked off his to-do list, he has all the time in the world to mold into a more mature but still amiable personality. He’s been given a second chance at redemption. Now let’s just hope he takes it.