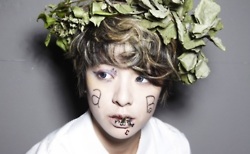 ‘Culture shock’ is a term coined to describe a person’s feelings of disorientation when newly submerged in a foreign culture or social environment. Oftentimes, the phenomenon is broken up into a series of four phases:

For this week’s Roundtable, we asked our writers: What are the ways in which culture shock manifests itself in international fans of K-pop? Are there any cultural norms of Korea that seemed foreign to you at first, but that you now perceive as perfectly normal?

Bethany: I feel like Korean dramas definitely give international fans a culture shock at first, because they show almost all aspects of common Korean culture. You get to see the importance of family in Korea, all kinds of foods (and how they’re enjoyed), the way the language sounds, and even how people dress. Perhaps it wasn’t as much of a culture shock to me because I’ve spent time in China, but I definitely remember being absolutely fascinated with everything about Korean culture at first. I burned through dramas at lightning speed and even read the Wikipedia article about Korea cuisine (I crave Korean food 24/7). I then went through a phase when I began to get used to seeing certain things (and associate things with Korean culture), and now Korean culture is pretty familiar to me. I still get fascinated by little things though, such as discovering a box of Pororo markers in a stationery store in China.

One thing that surprised me about Korean culture at first was the importance of age. In K-pop groups, the younger members speak formally to the older members for the most part (unless it’s Sungjong being a rebellious maknae), and elders are extremely respected there. The different levels of speaking plays a huge part in how people interact with each other and respect is taken very seriously. While in other Asian countries, the elderly are also very respected, it was definitely something that stood out to me about Korean culture. 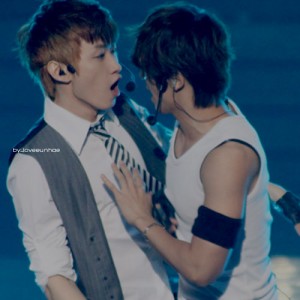 Fannie: I think that the different phases outlined above do manifest themselves very apparently in K-pop fans — although international fans for the most part are only being consumers of Korean culture (rather than totally immersing themselves in the same way as living in the country) you can definitely see the fans at different stages of either romanticizing the culture (i.e. “Oppa can do no wrong,”), becoming disillusioned after discovering darker (i.e. xenophobic, misogynistic) sides it it, then understanding why exactly a culture is the way it is, looking at history and both sides of the equation. And as an optional side product of the whole thing, consumers of K-pop may even begin to feel distant from the popular culture of their own home country.

One thing that I can definitely say made me do a double-take at first is how natural bromance and “skinship” is in Korea between males (without a homosexual connotation), for example, that they can hold hands walking down the street or give each other random massages or hugs and no one would give it any particular thought, as it is simply seen as a gesture of friendship. I really like that, actually — we tend to critique homophobia when it rears its ugly head in their culture at times here on this site, but on the other hand, the normalcy of this type of “skinship” makes me think that on the flip side maybe homophobia may also be more ingrained into our own culture than we would like to admit. After all, what’s wrong with guys holding hands?

That’s something I think is really great about being exposed to different cultures, that you get to expand your mindset beyond the frames of what your own society boxes you into.

Amy: Echoing what Bethany said, the importance of age was pretty interesting to me when I first got into K-pop. I grew up in an Asian household, so deference to people older than I am is nothing I haven’t been used to, but to see it embedded into the language was very interesting to me. The shows and dramas I watched were subbed by fans, presumably, and a lot of them alternated between leaving things like “oppa,” “unnie,” “hyung,” “noona” as is, or they substituted the actual character’s name because there’s obviously no equivalent of that in English that would make sense. So that tripped me for a while.

Skinship and bromance were total pleasant surprises to me … until I realized how rampant homophobia was in mainstream K-pop. So you win some, you lose some with K-culture shock. 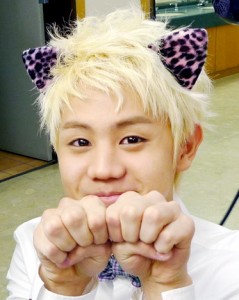 Nabeela: I think any new fan of K-pop is bound to shocked in some way or another, especially as they begin to realize the world of K-pop and really K-entertainment as a whole is not as beautiful or seamless as they let on. If anything would be the most shocking, I would have to say that K-pop fan culture has a vigor and passion to it that your average international fans could never really prepare themselves for. And not only that, but the idols inability to fight oppressive fan culture is also equally shocking.

Another way in which fans like us become culture shocked is fleshing out the reasoning behind pop culture in Korea, which in itself underscore how we as international fans have to apply ourselves to a culture we may not understand and we cannot actually physically experience. Like Fannie mentioned, its about understanding why a culture is they way it is, and that warrants a lot of culture shock for anybody.

For myself, some of the more shocking things about K-pop was aegyo and the way in which it is used as a marketing device. Also the dark world of the perfected trainee system was something I had never heard of before, and that has social and cultural implications that took me time to really understand.

Salima: Bethany, I totally agree with you about the age thing. In fact, I recently had an argument with my little brother and the whole time I kept thinking, “Why isn’t he listening to me? I’m his noona!”

I grew up in an African household, but living in America, you can really start to lose your sense of African culture. One thing that is really important in my household is respecting elders: particularly parents. You’re just not allowed to talk back no matter how wrong they are. It’s a value that the younger kids in the family (who’ve grown up around other American kids) have lost. And that includes me. So watching K-dramas, I find it so relate-able how you’ll rarely, if ever, see a child yell or talk back to his or her parents. Even if the parent is conniving (Secret Garden, Boys Over Flowers), overbearing (Personal Preference), or even trying to kill you (City Hunter). There’s always respect, even when the parent is wrong. I don’t remember ever seeing characters cross the line when it comes to their parents. Of course there are times in dramas when I want sons and daughters to give their parents a sturdy piece of their minds but in the end I respect that aspect of Korean culture.

One thing that is a culture shock for me is the idea of “doing something well.” In Korean culture, before eating, one would say “I’ll eat this well” and when done eating would say “I ate well.” Or more specifically when K-Pop idols are promoting an album or tour, they’ll consistently say things like, “Wish me well, I’ll work hard.” They’re the kind of statements I don’t hear from performers in the U.S. It’s kind of a silly thing to be culture shocked by but the idea that artists say “Please support me and wish me well while I go on tour” instead of the more common American promotional phrase “Go buy my album” is super interesting to me. 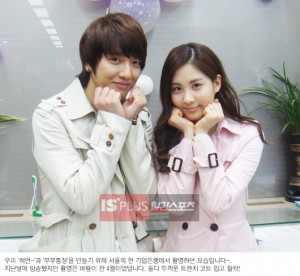 Johnelle: I’ve said this many times before, but what hooked me into the K-pop culture was watching Hwangbo and Kim Hyun-joong on We Got Married. I’ve taken Japanese language classes in the past, so I was aware that there were forms of formal and casual speech in foreign languages, but I found the difficulty that Kim Hyun-joong had to be more casual with Hwangbo — who was older than him and his sunbae in the music industry — so weird. I mean, even though it was make believe, they were ‘virtually’ married. And even the length of time it would take for someone to feel comfortable enough to speak banmal to someone else who was older or a sunbae, like Yonghwa and Seohyun, was just baffling. If it were me, as soon as someone told me it was okay to be casual/friendly I would be all like “hey, what’s up?”

As far as the whole skinship thing between genders (mainly the male/female relationship instead of the male/male and female/female which a whole different story), I find ‘manner hands’ and the big deal over hugs and a kiss on the cheek… interesting. I guess it all depends on your perspective — in Hawaii, a kiss on the cheek and/or a hug is a common greeting–even when being first introduced.

I found the role of mother-in-laws specifically horrifying after first watching Boys Over Flowers, and then pretty much any other K-drama. I know it’s an exaggeration of reality and not always true for every family, but even still. A daughter-in-law for the most part is expected to be a new live in maid, even if she still works? I’d pass on that situation. I also really dislike the ‘makjang’ in K-dramas especially the evil rampant within families or corporations over money and power. Like I said previously, I do realize that these stories are ‘exaggerations’ of real life, but all fiction is rooted in some fact, right?

I love the food culture of South Korea; they have a real love of good food as do people in Hawaii. You can see their food everywhere too – in the dramas and variety shows. One of the things I loved about Family Outing was that they would travel to different parts of South Korea and then highlight what that area was known for, be it a certain crop, raising of pigs or cows, or fishing for a certain type of seafood. And then they would prepare and cook it, mmm. I also appreciate that they produce so much of their food within their own country and value organically grown produce. Because Hawaii is such a popular destination for tourists, the land here is very valuable and land owners are finding it more profitable to build things on the land they own than to grow things. Acres and acres of our prime agricultural land gets turned over to housing or commercial developments every year making Hawaii almost completely dependent on outside sources of food–which isn’t exactly the smartest thing to do being the most isolated land mass in the world.

The last and probably most shocking thing to me when I began watching Korean entertainment was that my skin was in bad shape. I don’t have bad skin, but it’s not perfect and I just never really took good care of my skin. After watching so many variety shows and dramas and seeing these idols and actors’ perfect skin and use of lotions, and potions, and face masks I realized that I really needed to step it up in my skincare routine. I mean, after watching even guys do face masks–a woman must do, what a woman must do.

After following K-pop for a few years now, these things don’t even phase me — well, except for the makjang.