Doomsday Book & How The World Will End

In 2006, Korean Directors Kim Ji-woon, Yim Pil-sung, and Han Jae-rim came together to develop a three-part anthology titled “인류멸망보고서,” or as it translates into English, “Report on the Destruction of Mankind.” Each piece of the anthology participates in a variety of hypothetical situations, from zombies, to robots, to believe it when you hear it, 8-balls, in which the world is on the edge of destruction and we, as participants in the film, are invited to investigate whether these concerns are relevant to our real, daily lives. The result: some hardy hars, some eye rolling, but a whole lot of reminding that we are in the Age of Decay and it’s all our bloody fault. 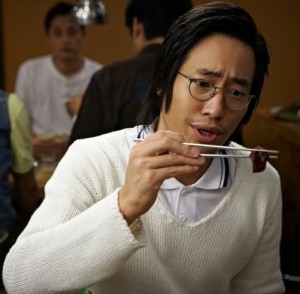 The first film in the anthology, Yim Pil-sung’s “A Cool New World,” takes us into the sights and sounds of researcher Yeon Seo-wook. Seo-wook is in the prime of his life: young, in the midst of his military duty, and going on blind dates with pretty girls like Kim Yoo-min. But he has a problem: he becomes a zombie. At the root of the problem is garbage – quite literally. After his family leaves on a vacation without him, he is assigned the task of taking out the trash. He forgets all about it until he comes upon the aforementioned  – now rotting – trash, ruins his appetite for the day, and with the utmost disgust and hatred, finally disposes of it. We undergo a similar experience as an audience after viewing the following sequence. The trash is transformed into food for cows and those cows that are then transformed into food for us.  Essentially what we have here is the horrifying and grotesque realization that we are essentially consuming and re-consuming our own waste. Bon appetite! The film looks at our cyclical, automatic behaviors associated with modernity and puts a humorous little spin on how we, as a society, are consuming trash, both literally and figuratively, and how we never stop to think and evaluate what we are doing and why we are doing them. And that, according to Yim, is precisely why the world is going to end. Unfortunately, while the crux of the film is fulfilling and promising, the film is bathed in cliché, pash humor that is desperately trying to join the ranks of comedic, horror films. But what we are left with instead, is a dry heave of distractions that leave those of us who are not so easily amused, struggling to get past the weak and embarrassing attempts at humor and into the rich material hiding underneath all the garbage – both literally and figuratively. 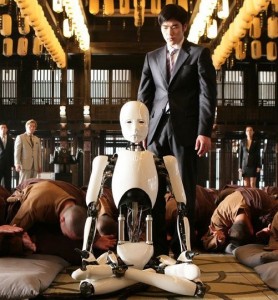 The second film in the anthology, Kim Ji-woon’s “Heavenly Creature,” takes us away from the ridin’ down Seoul city and brings us to a Buddhist temple where robot repairman Park Do-won is assigned to evaluate a robot who believes, and is believed to be, a reincarnation of Buddha. While Do-won struggles with the robot and his perceived “enlightenment,” after his company decides that the robot is a threat to humans and should be dismantled, he and the robot’s devotees attempt to save him. While the film appears to be sympathetic towards the robot and all forms of sentient technology, the film, in truth, is sympathetic towards humans. The anthology as a whole, regardless of its melancholic, you’ve-signed-yourself-to-your-own-doom tone, is always on the human’s side. Like that buddy that sticks up for you in a fight even though they think you’re wrong. The second piece however, does highlight that sentient technology can be a threat to humanity, especially when we are under the assumption that sentience and free will are mutually exclusive. Technology, in both our world and the world within the film, is meant to either replace human labor or make it more efficient. But when we advance technology to the point that it is able to make decisions, the idea that the technology is only meant to make decisions that serve our interests, does not follow. And that is precisely what is at the crux of the film. The best piece of the anthology, “Heavenly Creature” is able to bring a fresh twist to the robot genre. While it could easily be pegged as a Korean I, Robot, the film brings the robot into one of the most human places on the planet – religion. However, a 20-30 minute film is but a slice of what could have been an insightful, rewarding film that juxtaposes the sacred and the profane, sentience and subservience, and the like. We are left with one major loose end – mainly Park Da-won’s robotic arm – but a whole lot, ‘I would have liked to have seen more of this.’ Regardless, after coming out of famous Korean films like The Good, the Bad, and the Weird as well as I Saw the Devil, Kim Ji-woon’s contribution to the anthology is a delight produced by a simple visual style and a simple scenario in order to investigate complex ideas. The only thing anyone could ask for: more. 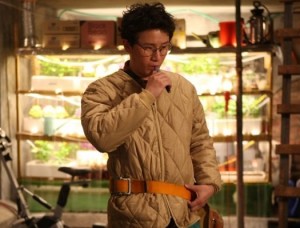 The third film in the anthology, Yim Pil-sung’s* “Happy Birthday,” returns to the flavor of the first film, mixing lightheartedness with the darker side of our life and world. After Park Min-seo breaks an 8-ball that belongs to her billiards obsessed father, she manages to procure a replacement from a mysterious website that sets off an equally mysterious chain of events that eventually leads to the end of the world – a meteor, with the appearance of an 8-ball, is hurdling towards the Earth. Min-seo’s family begins preparing for the end of the world by entering an underground bunker only to leave 7 years later possessed by a bright light. The film relies largely on loose parallels to get to the crux of the story, the 8-ball standing in for our future, and the fantasy apocalypse standing in for the very plausible nuclear apocalypse. After the Fukushima disasters, Asia’s relationship with nuclear power is currently at a standstill. While it remains to be a primary source of power in Asia (In Korea, it provides approximately 45% of the nation’s power), the Fukushima disasters have stained nuclear power’s reputation in the Far East and the destructive consequences behind our ideas of “progress” is Yim’s second response to the ever modern question of “How will the world end?” But, as with the first film in the anthology, I have the same complaints. A fruitful idea is covered by a pile of clichéd, eye roll-worthy humor and prevents the film from truly realizing itself. Yim has some good, insightful ideas to relevant subjects, but instead of using humor to enhance them, his style can leave such a bad taste in my mouth that it can be distracting.

Doomsday Book, which is the official English title of the anthology, is full of rich, nuanced ideas. Or at least the potential for such ideas. But unfortunately, they come with a heavy helping and a large sense of incompleteness. The format could be a main reason for many of these problems. While anthologies are not animals never to be played with, there is always a time and place for them. Do these films work best in such a medium? Because of the limited time these films have to unpack themselves, either they are left incomplete or use third-rate humor to lighten the issues that they discover and explore and thus, put on the façade that it is perfectly acceptable to pack all of this into a mere 30 minutes. For what they’re worth, they carry some food for thought and some laughs if you’re into fortune cookie humor. But if you’re looking for a smart movie that really packs a punch to how the world will end and why precisely, this film, in its pieces and as a whole, are not fully realized enough to offer that.

*After the first two pieces of the anthology were shot however, funding fell through and the project was not able to be completed until recently, in which, upon reboot, Yim Pil-sung returned to direct the final segment of the film, “Happy Birthday.”